Irrespective of whether vehicles drive themselves delivery companies still have to solve the “last mile” problem, and this is one of their ideas.

As we all order more and more stuff from Amazon and other online retailers, delivery of goods becomes an increasingly pressing concern, and one solution that’s now being presented by Continental, the same company behind your car’s tyres, is to combine autonomous delivery vehicles with autonomous robot delivery dogs – the same type of Robo-dogs that Boston Dynamics, one of the world’s most advanced robotics company’s, recently showed off dancing to Uptown Funk.

A challenge for delivery robot concepts is the need for the robots, such as Domino Pizza’s four wheeled version they’re trying out in Germany at the moment, to travel long distances between drop-off locations. Then, of course, the robots need to be small and manoeuvrable enough to actually make a delivery to a home or place of business whose access might be tricky or awkward. Continental’s approach to this challenge is to break it down into two components – one driverless vehicle about the size of a small car, and a number of smaller delivery robots. The robots can be transported inside the vehicle and then deployed to actually make the delivery. 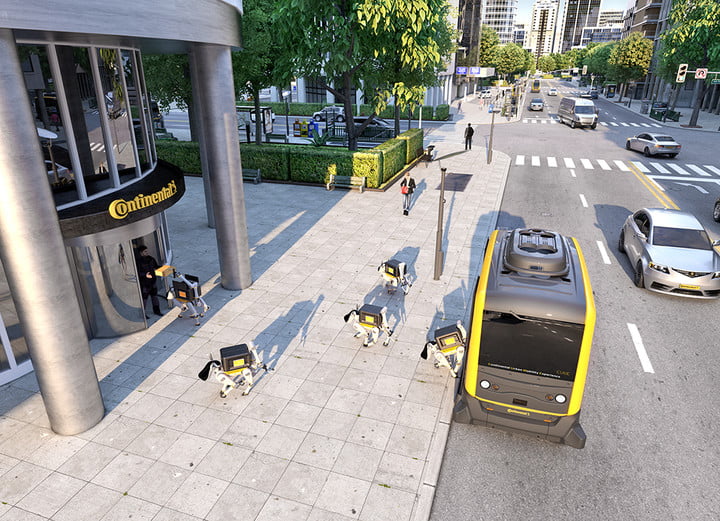 Continental is working on the driverless vehicle, called the Continental Urban Mobility Experience (Cube), which it will customize to meet the needs of robot manufacturers. The Cube should be able to navigate busy urban environments in an efficient way, avoiding obstacles and offering a solution to the sop called “last mile” problem in logistics. The approach of using a deployment vehicle for autonomous robots is referred to as a Robo-taxi or pod, and promises to offer a more sustainable way to move goods around.

The idea of combining driverless vehicles and delivery robots is a natural one, according to Ralph Lauxmann, head of Systems and Technology at Continental.

“Both are electrified, both are autonomous and, in principle, both can be based on the same scalable technology portfolio,” he said in a statement. “These synergies create an exciting potential for holistic delivery concepts using similar solutions for different platforms. Beyond this technology foundation, it’s reasonable to expect a whole value chain to develop in this area.”

As driverless vehicles become commonplace, there will be many uses for them in addition to deliveries. For example, during busy rush hours, the vehicles could be used as taxis for commuters, then outside of these busy times, the same vehicles could be used for deliveries. Having the vehicles in operation almost 24/7, something that Toyota are also proposing with their new E-Pallette vehicle format, would make for much more efficient use of resources and could eventually lower or eliminate the need for privately owned cars.