Countries are racing to improve access to, and the mobility of, their citizens and their workforces in order to boost their economies, and new “advanced transportation technologies” are increasingly being seen as the new broadband.

Dubai is to be home to the world’s first Hyperloop One transport link, which is expected to begin operations for passengers in 2020. The ambitious plans for a new multi-billion dollar hi-tech Hyperloop transport system were unveiled today and will see travel times between Dubai and Abu Dhabi slashed from thirty minutes to as little as 12 minutes.

Breaking news: @RTA_Dubai and Hyperloop One sign a deal to pursue a passenger and cargo #hyperloop network in the UAE pic.twitter.com/u7Gqd3dcaK

Once operational, passengers will be able to book travel on the train, which will use a system of vacuum tubes and superconductors to help propel it to will be capable of speeds in excess of Mach 1.0, with a smartphone app, which, once linked to a fleet of autonomous cars, yet to be announced, will provide users with a door to door service.

“Having signed an agreement with DP World in August to pursue a cargo based Hyperloop One system at Jebel Ali Port, our focus has now expanded to include connecting the Emirates,” said Rob Lloyd, Chief Executive of Hyperloop One.

“As a central global transport hub, pursuing the implementation of a Hyperloop in the UAE makes sense and the leaders of the UAE understand that transportation is the new broadband, with the power to transform life throughout the GCC. We are now at a stage where, from a technological point of view, we could have a Hyperloop One system built in the UAE in the next five years,” he said.

He was speaking during the signing of an agreement between the company and Dubai’s Roads and Transport Authority on Tuesday at the Burj Khalifa.

The dramatically short travel times are made possible by the 1,200kph speed of the “pods” that travel through a tube using magnetic levitation and the Los Angeles based startup is planning to show off a working proof of concept system next year.

The agreement will see the partnership between Hyperloop One and the RTA move into a “pre-feasibility stage,” said the company’s co-founder and president of engineering, Josh Giegel.

“That will take between 90 to 120 days but, by the end of it, we will have a plan for where the stations will be located and the route of the network,” he said.

“Once that is complete we will set up a proof of operations facility where we will be able to test the system on a 20km to 30km track. We are working with the RTA to evaluate potential locations for stations and the tube route.”

The developers are promising direct travel between destinations within the Emirates with journeys between Dubai and Fujairah as low as 10 minutes and Dubai to Riyadh in just 40 minutes and the project will be split in to three phases, with the first focusing on creating a network in Dubai. It will then link with Abu Dhabi and the final phase is expanding to the rest of the GCC.

A private video presentation showing the journey between potential stations at Etihad Towers and Burj Khalifa was shown to everyone who attended and it showed how passengers would book their pods using a smartphone app, arrive at the station and then be whisked off at speeds of up to 1,200kmh, through the hyperloop tunnels to arrive at their destination just moments later.ing a smartphone app passengers will be given the number of the pod they will take for their journey and once at the station, they will get into the pod which will then speed off into the “Loop Tunnel” then moves into the loop tunnel to travel. One of the concepts for the route is to have a mixed underground and overground link.

“Imagine stepping out of your villa in Dubai, into a self-driving vehicle that resembles your living room and arriving just 48 minutes later at your office in Riyadh. That is what Hyperloop One can deliver,” said Mr Giegel.

No ticket pricing has been set but Mr Giegel believes it would be at an “affordable” level, between the price of a Metro and a high-speed rail service.

“This is an opportunity to help transform the UAE from a technology consumer to a technology creator, incubating expertise for a new global industry, in line with the UAE’s Vision 2021,” said Matter Al Tayer, director general of the RTA.

WHY THIS MATTERS IN BRIEF The aviation industry is one of the world’s biggest polluters, so Reaction Engines is developing green fuel for its first…

WHY THIS MATTERS IN BRIEF Cameras that can see around corners are getting better, and the technology is beginning more commercially viable but there’s still… 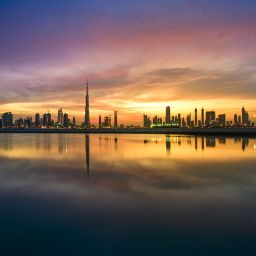 The UAE is one of the world’s most forward thinking countries, and as they look forwards to their Centennial in 2071 it’s our privilege to…

WHY THIS MATTERS IN BRIEF Transportation on Earth is going fully autonomous, and now so too are spacecraft.   Interested in the Exponential Future? Connect, download…

WHY THIS MATTERS IN BRIEF This is just one example of how 5G will let us work and play in new ways, and it’s just…