Imagine being able to have your health and emotions monitored wirelessly wherever you were, whether it’s in your house or even out in the street, that’s the promise of this new technology.

Imagine a box, yes, that’s it, similar to the wifi router you have at home, that sits in your home and tracks all kinds of physiological signals, such as your breathing, gait, heart rate, sleeping patterns, and more, as you move freely from room to room. This is the “box” that Dina Katabi, a professor of electrical engineering and computer science at MIT in the US has built in her lab, and in the not so distant future she believes it will be able to replace the array of expensive equipment we currently need to use to get valuable clinical data about an individuals overall wellbeing and health. Furthermore, when it’s combined with another MIT breakthrough that I discussed last year, the same box could also use wifi technology to read your emotions… cool eh!? I know, it’s great. And who needs privacy nowadays anyway?

Speaking at MIT’s EmTech conference the other week Katabi said the box she’s been building for the last several years takes advantage of the fact that every time we move, even if it’s just a teeny, tiny bit, such as when we breathe, we change the electromagnetic field surrounding us.

Her device transmits a low power wireless signal throughout a space the size of a one or two bedroom apartment, and even through walls, like this other MIT invention that can track your movement through walls, and the signal reflects off people’s bodies in specific ways which can then be analysed by the boxes Artificial Intelligence (AI) and machine learning to extract physiological data.

So far the box has been installed in over 200 homes of both healthy people and those with conditions like Parkinson’s, Alzheimer’s, dementia, and pulmonary diseases, she said. Katabi co-founded a startup called Emerald Innovations to commercialise the technology and has already made the device available to biotech and pharmaceutical companies for studies.

To illustrate how this could be helpful, Katabi also showed off data gathered over eight weeks in the home of a Parkinson’s patient, indicating that his gait improved around 5 or 6am each morning, right around the time he took his medication.

That data nugget alone could also help doctors figure out how some medications help certain patients but not others.

Katabi said her research found that the device can also accurately monitor an individuals sleep, including individual sleep stages, when they’re in their own bed, with no changes to the way they sleep or what they wear – a big difference from sleep studies today, which typically call for snoozing in a lab setting with a lot of electrodes and wires connected to your body. Or Fitbits. Because the device would be installed in a home, it could track the resident over time, too, which could be useful for watching sleep disrupting conditions like Alzheimer’s or depression, she said. Both of which, it’s worthy of note, can now also be diagnosed by a mere smartphone app.

It might sound alarming to have anything in your home that is constantly tracking and monitoring you in such close detail and obviously one of the major concerns could be that the new box could prove to be an invaluable tool for snooping on people, or other kinds of abuse.

Katabi said data is collected only about specific traits and only with a person’s consent. In addition, the data is encrypted and is limited to certain designated recipients. And don’t worry about a rogue neighbour pointing his or her box in your direction, Katabi said the setup process requires a user to complete a series of specific movements before it’s possible to be tracked, so it would be very difficult to secretly follow an unwilling participant.

While Katabi is currently focused on healthcare applications for the data, she’s also considering how it could be used for other things, like fine tuning your smart home so when you sit on the couch, your smart TV could play your favourite show, and so on. And all of this is only the beginning – of both a new way to surveil people, but also of a new way to improve our health and quality of life. 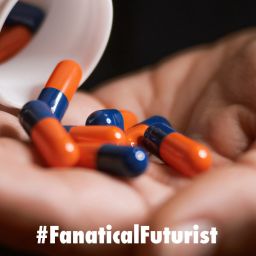 WHY THIS MATTERS IN BRIEF Change can be scary, especially if you’re unprepared, however, with the right insights and experts…