How to think exponentially and think like a Futurist

It shouldn’t come as any surprise that we humans aren’t great predictors of the future – whether it’s trying to predict the outcome of a football game or an election, or trying to predict what will happen when self-evolving AI’s and robots finally gain “consciousness” and “awareness” – something that we can already see emerging, albeit in rather odd and unexpected ways.

For most of history humanities experiences have been what we call Local and Linear. For example, if you look back through human history most change was slow and gradual from generation to generation – we ate the same foods, used the same tools, and lived in the same place for most our lives.

As a result humanity developed an intuitive outlook of the future akin to how we approach a staircase – having climbed a number of steps our prediction of what came next was simply more steps followed by even more steps with each day expected to be very similar to the last and a future that we thought of as being predictable.

Fast forwards to today though and the rapid pace of technological development has accelerated this this rate of change – so much so that change no longer occurs merely between generations, but within them too.

Against our intuition, today the future is unfolding not linearly, like it appeared to in the past, but exponentially, which is making it increasingly challenging for us to predict what will happen next and when. This is why the pace of technological progress tends to surprise us and we find ourselves in surprising situations – after all how do we prepare for a future that follows an exponential trend and not linear ones if we aren’t programmed to think this way?

Let’s take a look now at the basics of exponential growth.

WHAT IS EXPONENTIAL GROWTH?

Furthermore, if you took 64 exponential steps, the same number of squares on a chess board which, as the famous story of the inventor and the great king goes, where in return for the game the inventor asked the king for payment in rice where the first square had one grain of rice and then the amount of rice doubled on each subsequent square, and which first gave rise to the concept of “exponential,” then you would have travelled an astonishing 18 QUINTILLION meters – enough to travel to and back from the Sun over 120 million times.

As you can see from just this simple example even after just 30 exponential steps the difference would make the mind boggle, let alone after 64, and that’s the difference between a linear outlook and an exponential one, or, to put it another way, linear thinking and exponential thinking. It’s also a prime example of the deceptive power of exponential growth.

EXPONENTIAL GROWTH IS DECEPTIVE, THEN EXPLOSIVE

What’s most interesting though about exponential growth is that when you double your stride each time you progress the same distance with each step as all the previous steps combined. For example, before you hit a billion meters at step 30, you’re “only” at 536 million meters at step 29. Consequently, that means all your previous steps look minuscule by comparison and that, as you can see, most of the truly “explosive” growth happens over a relatively short space of time.

Technology is a prime example of this, especially given the fact that many of today’s technologies are exponential in nature, meaning that they improve exponentially. A good example of this is Moore’s Law that was first coined in 1965 by Gordon Moore after he noticed that the number of transistors in an integrated circuit in computer chips doubled approximately every two years. In 1965 the first IC’s had just a few transistors, but fast forwards to today and the latest computer chips have trillions of transistors and computers, which have become increasingly powerful over time, have changed the whole world.

The Human Genome project, which was based more specifically on gene sequencing technology, is another example of an exponential technology. When the project first got underway in 1990 critics said that based on the speed with which the human genome could be scanned and sequenced the project would take thousands of years to complete. Just 15 years later though, in 2003, and the first draft was complete, which is yet another great example of the deceptive nature of exponential growth which all too often catches even experienced people off guard.

WILL EXPONENTIAL GROWTH EVER END?

In reality though exponential trends don’t last forever as, as you can imagine, it gets increasingly difficult to keep the pace up, especially when it comes to exponential technology.

Take Moore’s Law for example where it’s now getting difficult to double the number of transistors on an IC because we’re rapidly closing in on transistors that are only a few atoms in size – a size so small that they begin interfering with one another and causing errors. The answer to this problem though, where a particular exponential technology or trend is running out of steam, is to jump to a new technology.

In the example of Moore’s Law this means moving away from developing silicon based computing platforms and developing new ones including biological, chemical, DNA, liquid, neuromorphic, photonic, and quantum computing platforms, as well as a myriad of other insanely powerful sci-fi like platforms. This is called “Jumping the S-Curve” and it’s where we ultimately move from one type of technology to another – and then the exponential rate of improvement starts all over again until it peters out and the cycle repeats, over and over and over again as technology advances.

That said though, when you use the above example and look at computing as a whole, where we continuously jump from one exponential technology, or “S-Curve,” to another, the rate of exponential advancement continues almost ad infinitum.

These so called S-Curves are in essence S-shaped technological lifecycles so named because each curve looks like a squashed letter “S” because of the three growth stages it represents – initial slow growth, followed by explosive growth, and then finally levelling off as the technology matures and its rate of development slows. The phrase jumping the S-Curve comes from the fact these S-Curves overlap in time, so when the development of one exponential technology slows another one supersedes it. Furthermore, with each new S-curve the amount of time it takes to reach even higher levels of technological performance is less.

“The future will be more amazing than almost any of us could imagine if not only for the reason that very few people have come to terms with the fact that the rate of acceleration itself is accelerating.”

The lesson of all this, of course, is expect to be surprised, and then plan accordingly.

So, what might the next five years look like? One way to forecast it would be to look at the last five years and then reduce the time it will take to make a similar amount of progress in the next five. After all, it’s important to remember that another implication of exponential growth is that the rate of change and disruption are themselves accelerating, which means the things that previously took five years to accomplish will now likely take just two or three – along, of course, with the implications that come along with increasingly powerful and impactful developments.

The practice of Exponential Thinking isn’t really about the ins and outs of how you plan, after all you know how to do that, it’s about better timing your plan, whatever that might be, and with a little practice we can all make better plans by becoming consciously aware of our intuitive, linear expectations and adjusting them for an exponential future.

WHY IS EXPONENTIAL THINKING VALUABLE?

This isn’t just an interesting concept – our linear brains can get us into real trouble. Thinking linearly in today’s exponential world can cause companies, governments, and individuals to get blindsided by factors that trend to exponential growth. Companies get disrupted by new competitors, governments and regulators struggle to remain relevant and keep policies current while at the same time trying to plan decades ahead, and all of us increasingly feel that the future is something that is being done to us rather than something that’s within our control.

Therefore, if we understand the rate of change and disruption are accelerating, and we understand that the timelines we were previously working to should now be more condensed, then the value of this is that we can ease the transition from one paradigm shift to the next and be appropriately prepared for what’s coming. 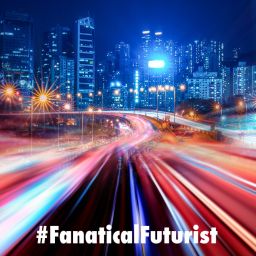 Exponential technologies feel like they’re accelerating because they are

“While many people feel the rate of technological development is accelerating what they often miss is that this acceleration is also accelerating.”   Love the…

WHY THIS MATTERS IN BRIEF As silicon based transistors, the bed rock of today’s modern computing platforms, near their theoretical limits we will see the…

WHY THIS MATTERS IN BRIEF As transistors reach their physical limits we need to develop fundamentally new computing architectures, and this is just one example…

WHY THIS MATTERS IN BRIEF Moore’s Law redefines itself for the next decade of computing.   Early in 2016 the worldwide semiconductor industry acknowledged what…

WHY THIS MATTERS IN BRIEF Transistors capable of self-learning has many benefits, including helping create robots that teach themselves new skills without human help or…