Transistors are found in every electronic device on Earth, but Moore’s Law is running out of steam, and now researchers have developed the world’s smallest transistor – with zero size.

Moore’s Law is slowing down, meaning that decades worth of continuous improvements in computing power are coming to an end – so we’re told. However, as it gets more expensive, which is the real problem with Moore’s Law, to create ever smaller silicon based transistors for computer chips researchers all around the world have found ways to push the limits of transistors so much so that today we have 5nm, 3nm, 1nm, 0.5nm, liquid, molecular, and even single atom transistors in the labs. But, after a new announcement, even those transistors appear huge after scientists developed a transistor that’s just a single photon in size. What makes the breakthrough even more extraordinary though is the fact that, because of a geeky physics “fact,” photos aren’t actually particles they’re waves which actually means that for the first time scientists have created a transistor that, literally, has no size. For example, 0nm. Nothing. Nada. And as transistors go it’s unlikely anyone will be beating that record any time soon.

Transistors are tiny switches that form the bedrock of modern computing—billions of them route electrical signals around inside a smartphone, for instance, and future Quantum computers, that are hundreds of millions of times more powerful than today’s computers, will need analogous hardware to manipulate quantum information. But the design constraints for this new technology are stringent, and try as we might even today’s most advanced processors can’t be repurposed as quantum devices. That’s because quantum information carriers, dubbed qubits, have to follow different rules laid out by quantum physics. 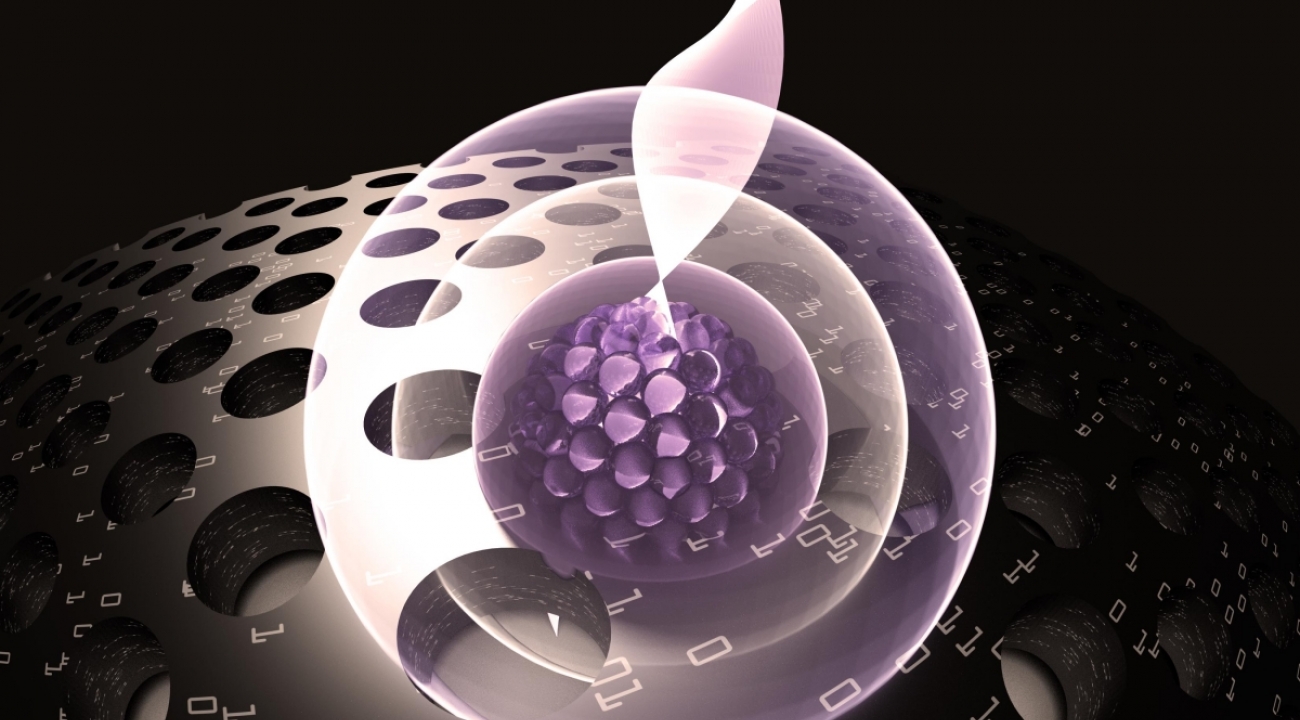 Researchers demonstrate the first single-photon transistor using a semiconductor chip. They used a single photon, stored in a quantum memory, to toggle the state of other photons. (Credit: E. Edwards/JQI)

Scientists can use many kinds of quantum particles as qubits, even the photons that make up light. Photons have added appeal because they can swiftly shuttle information over long distances and they are compatible with fabricated chips. However, making a quantum transistor triggered by light has been challenging because it requires that the photons interact with each other, something that doesn’t ordinarily happen on its own.

Now, researchers at the Joint Quantum Institute (JQI), led by JQI Fellow Edo Waks have cleared this hurdle and demonstrated the first single-photon transistor using a semiconductor chip. The device, described in Science, is compact: Roughly one million of these new transistors could fit inside a single grain of salt, and it’s also fast – able to process 10 billion photonic qubits every second!

“Using our transistor, we should be able to perform quantum gates between photons,” says Waks. “Software running on a quantum computer would use a series of such operations to attain exponential speedup for certain computational problems.

The photonic chip is made from a semiconductor with numerous holes in it, making it appear much like a honeycomb. Light entering the chip bounces around and gets trapped by the hole pattern; a small crystal called a quantum dot sits inside the area where the light intensity is strongest. Analogous to conventional computer memory, the dot stores information about photons as they enter the device. The dot can effectively tap into that memory to mediate photon interactions—meaning that the actions of one photon affect others that later arrive at the chip.

“In a single-photon transistor the quantum dot memory must persist long enough to interact with each photonic qubit,” says Shuo Sun, the lead author of the new work who is a Postdoctoral Research Fellow at Stanford University. “This allows a single photon to switch a bigger stream of photons, which is essential for our device to be considered a transistor.”

To test that the chip operated like a transistor, the researchers examined how the device responded to weak light pulses that usually contained only one photon. In a normal environment, such dim light might barely register. However, in this device, a single photon gets trapped for a long time, registering its presence in the nearby dot.

The team observed that a single photon could, by interacting with the dot, control the transmission of a second light pulse through the device. The first light pulse acts like a key, opening the door for the second photon to enter the chip. If the first pulse didn’t contain any photons, the dot blocked subsequent photons from getting through. This behavior is similar to a conventional transistor where a small voltage controls the passage of current through its terminals. Here, the researchers successfully replaced the voltage with a single photon and demonstrated that their quantum transistor could switch a light pulse containing around 30 photons before the quantum dot’s memory ran out.

READ
Scientists stored a movie inside a living bacteria, then replayed it

Waks, who is also a professor at the University of Maryland, says that his team had to test different aspects of the device’s performance prior to getting the transistor to work.

“Until now, we had the individual components necessary to make a single photon transistor, but here we combined all of the steps into a single chip,” Waks says.

Sun says that with realistic engineering improvements their approach could allow many so called Quntum Light Transistors (QLT) to be linked together, and the team hopes that such speedy, highly connected devices will eventually lead to the creation of ultra-fast compact desktop-like quantum computers as I’ve discussed before.

WHY THIS MATTERS IN BRIEF The fastest form of 5G, mmWave, has a limited distance of a mile or so, this latest breakthrough smashes that…

WHY THIS MATTERS IN BRIEF Plastic waste is a menace at sea and on land, but an ambitious project hopes to clean up 90% of…

WHY THIS MATTERS IN BRIEF The more organs scientists can create outside of the human body the greater the benefits to human healthcare, this latest…

WHY THIS MATTERS IN BRIEF When scientists can create artificial genomes they will be able to create new designer organisms, and humans, with entirely new,…