Future electric vehicles will be wirelessly charged, and this is the technology that will help underpin.

Plugging your electric vehicle in at night to charge it is a hassle, so too is finding a charging point, but thankfully we are already seeing the emergence of wireless charging systems for electric cars, and we’re already seeing the first batteryless electric cars coming through in the form of new commercial solar powered cars, from Hyundai, Light Year and Toyota, and that’s before I show you Lamborghini’s Terzo Millenio – a fully batteryless hypercar that they want to see in production by 2030.

A little while ago I wrote about what most people probably thought of as a boring technology innovation, but the exponential future is full of such seemingly “small and boring innovations” – a big fat new 20-kilowatt bi-directional wireless charging system wireless charging system from the US Department of Energy’s Oak Ridge National Laboratory (ORNL). But seemingly boring as it might seem I don’t think people will complain when they no longer have to plug their electric vehicles in at night. Furthermore, as we accelerate out the implications of this technology it also provides us with a pathway to completely eliminate today’s Lithium Ion battery packs from future EV’s and eliminate their rather horrific environmental footprint. 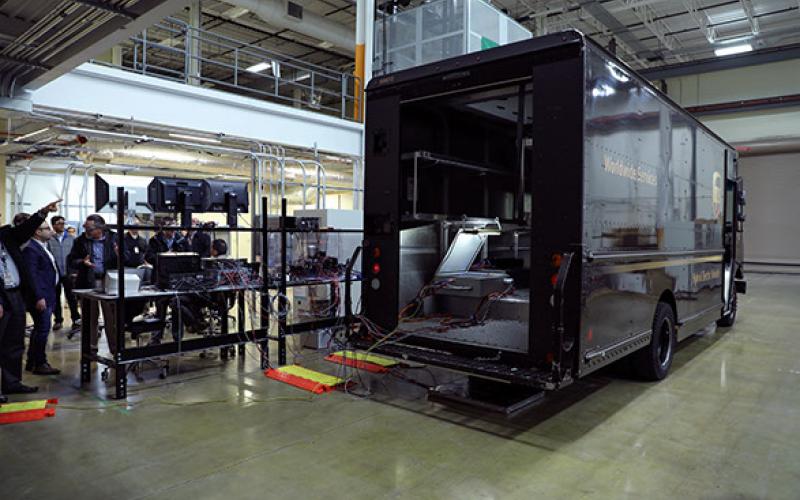 The first of a kind demonstration

Now the team at ORNL have installed their new system on a UPS medium-duty, plug-in hybrid electric delivery truck. The project is the first of its kind to achieve power transfer at this rate across an 11-inch air gap, advancing the technology to a new class of larger vehicles with higher ground clearance.

ORNL’s wireless charging technology transferred power between the truck and a charging pad across the 11-inch gap using two electromagnetic coupling coils at the demonstration. The system transferred electricity from the power grid to the vehicle battery terminals at more than 92% efficiency.

At a 20-kilowatt level, it would take about three hours to charge the vehicle’s 60-kilowatt-hour battery packs. Conventional wired charging typically takes between five to six hours using the existing onboard charging system, but this will get faster in time.

With its bi-directional design, the system also supports use of the vehicle’s batteries for energy storage meaning that when it’s not being used the van could feed any excess electricity in its battery packs back to the grid – or your house. ORNL’s bidirectional technology is fully compliant with grid power quality standards.

“Scaling the technology to a fleet of 50 trucks gives you megawatt-scale energy storage,” noted ORNL’s Omer Onar, who led the technical team’s effort at the lab – energy storage that as a customer you could sell back to the electricity grid in order to make some extra cash. Nice!

The technology takes energy from the grid and converts it to direct current (DC) voltage. Then a high-frequency inverter generates alternating current (AC), which in turn creates a magnetic field that transfers power across the air gap. Once the energy is transferred to the secondary coil across the air gap it is converted back to DC, charging the vehicle’s battery pack.

The system incorporates ORNL’s custom electromagnetic coil design and controls system, as well as wide bandgap power conversion systems, and the technology was tested using grid and battery emulators before it was integrated into the vehicle.

“There’s no off-the-shelf solution that can deliver 20 kilowatts across an 11-inch air gap with these efficiencies,” said Omer Onar, one of the researchers involved in the project, before adding, “The technology represents an integrated, holistic solution for vehicle electrification that also advances the next-generation smart grid, and it expands the possibilities for fleets who want convenient, efficient EV charging as well as electricity storage solutions.”

UPS meanwhile said they “appreciate the Department of Energy’s support on this effort,” and that “the project demonstrates innovative ways to utilize vehicle battery storage at fleet scale to power the vehicle, add resiliency to our facilities and support the grid,” said  Mike Whitlatch, vice president of Global Energy and Procurement for UPS.

The technology is now undergoing further testing and analysis as part of the project, and will likely be commercialised in the next two years.

WHY THIS MATTERS IN BRIEF Project Magenta will do for music what Google Deep dream does for images.   It’s a long way to Carnegie…

WHY THIS MATTERS IN BRIEF Transporting equipment into space is very, very expensive so NASA has turned to 4D printing to help it create new…