Future screen resolutions will pack so many “invisible” pixels into the screens that they will have a natural 3D effect.

Samsung has announced that it is developing a display crammed so full of pixels that it produces a 3D effect, without the need for those nerdy 3D glasses.

Just as 8k TV’s start hitting the market, and before 4k TV’s have even become the standard Samsung is now trying to surpass its own marvels and produce an 11k display, according to reports.

The super-sharp screens, some of which have already been viewed, will be developed first for TVs and will then be scaled down for phones, and the electronics giant has partnered with the South Korean government to produce the displays, which will boast a mind boggling 2,250 pixels per inch. And at this resolution, when 11k screens are implemented on mobile devices, the pixel density will produce a ‘3D effect’, according to the company – albeit one with a narrow field of view.

To put this is context, the iPhone 7 Plus, Apple’s current premium handset, features just 326 pixels per inch, and it is hoped that the project, dubbed EnDK, will produce a prototype by 2018, and the technology will be ready for smartphone use by 2019.

Early last year Samsung released their curved 105 inch television with a price tag of £77,000 ($120,000), so those tech enthusiasts among you with a love of super high definition displays might want to start saving now.

The Korean government is pumping £17m ($26.5m) into the project over five years, which is a partnership between Samsung and 13 other companies that launched in June. While the development will be welcomed by some tech enthusiasts, some experts say such increases in pixels will be unnoticeable to the human eye, but if it delivers on its promise of Naked-Eye 3D, or to put it another way, the ability to watch 3D movies, for example, without the need for those silly 3D glasses, then I doubt most people will care.

“Although some might think that 11K as over specification that consumers do not need, this can work as a basis for Korean display industry take another leap if related materials and parts improve through this,” said Executive Director Chu of Samsung Display, “we are hoping that we are able to show such technologies at the next Olympics if there is a progress in developing technologies.”

Creating ever-more detailed displays has now become the battleground for screen manufacturers, after they appear to have got as thin as they can go, with LG showing off a 1mm ‘Wallpaper screen” design last year, and one day, those screens we’re all so fond of will no doubt disappear altogether, but Holograms, despite some cool recent developments, are still a way off.

WHY THIS MATTERS IN BRIEF AI’s are getting better at creating and generating synthetic music, and some of them are starting to get signed by…

WHY THIS MATTERS IN BRIEF In some areas AI is now reaching human-like levels of performance, and one of those it seems is graphic design,… 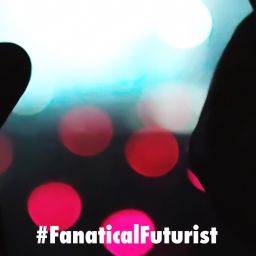 WHY THIS MATTERS IN BRIEF Everything you watch through a screen is just a collection of digital pixels, and as AI gets better at generating…

WHY THIS MATTERS IN BRIEF E-Ink has many applications outside of just being able to help you read novels on your Kindle, and when combined…

WHY THIS MATTERS IN BRIEF Five years ago most people hadn’t heard about DeepFakes, but as they get better now companies everywhere are using them…