Real diamonds leave open scars in the Earth and workers suffer to extract them, but these new diamonds are the ultimate in eco-friendly alternatives.

Diamonds, it seems, are becoming common place – a while ago I talked about a company making diamond batteries, and another company based out of California who’d created a custom made 45 carat diamond ring from a huge lab made diamond. and that’s before we discuss diamond’s new role as memory for future insanely powerful quantum computers. Now a British multi-millionaire and environmentalist has set out plans to create thousands of carats of carbon-negative, laboratory-grown diamonds every year “made entirely from the sky.”

Dale Vince, the founder of green energy supplier Ecotricity, claims to have developed the world’s only diamonds to be made from carbon, water and energy sourced directly from the elements at a “sky mining facility” in Stroud in the UK.

The “green technology first” uses carbon dioxide captured directly from the atmosphere to form the diamonds – which are chemically identical to diamonds mined from the earth – using nothing more than wind and solar electricity, with water collected from rainfall. 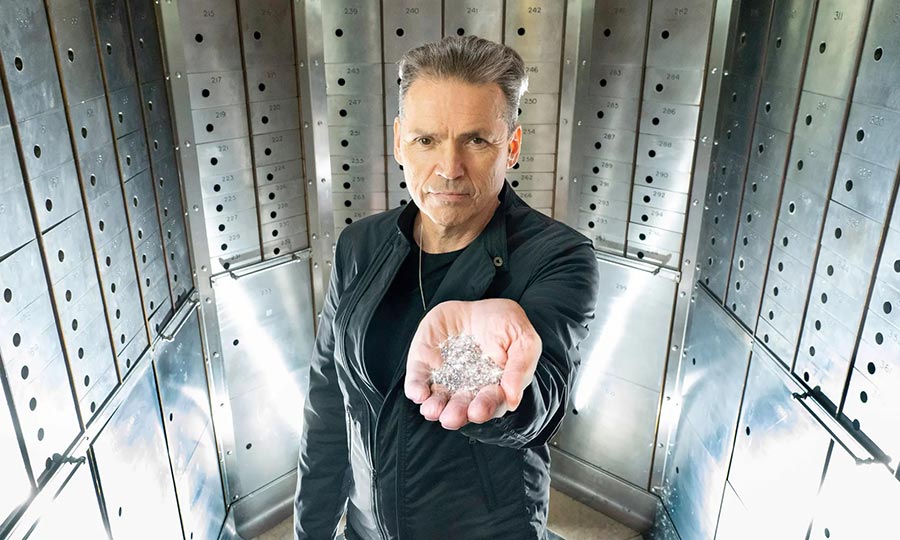 Dale Vince and his new diamonds

The result is the “world’s first zero-impact diamond”, according to Vince, and they could even help to clean the air by removing carbon dioxide directly from the atmosphere.

The clean energy entrepreneur said he hopes to challenge the traditional diamond mining industry which causes “irreversible damage” to the environment.

“Making diamonds from nothing more than the sky, from the air we breathe – is a magical, evocative idea – it’s modern alchemy,” said Vince. “We don’t need to mine the earth to have diamonds, we can mine the sky.”

The owner of Forest Green Rovers, described as Britain’s first vegan football club, Vince said he has not yet decided on the price tag for the climate-conscious gems, which are accredited by the International Gemological Institute.

Lab grown diamonds are rising in popularity as awareness of the environmental and socio-economic impact of the mining industry has grown.

In addition to the bloody conflicts that have erupted in diamond-producing regions, research has shown that producing a one-carat stone can involve shifting 1,000 tonnes of rock and earth, 3,890 litres of water and more than 108kg of carbon dioxide emissions.

Vince expects his new venture, Sky Diamonds, to produce 200 carats of the carbon-negative diamonds every month but said the facility could scale up to create 1,000 a month within the next year.

He told the BBC that Sky Diamonds would use a process known as chemical vapour deposition to create the diamonds at his Gloucestershire facility.

This process typically involves placing a “diamond seed” within a sealed chamber, or “diamond mill”, which is heated to 800C and filled with carbon-rich methane gas. The carbon elements will gradually bond with the “seed” to create a diamond anatomically identical to a stone that has taken billions of years to grow underground.

Vince has promised to source the carbon dioxide directly from the air and will produce the hydrogen needed to make methane by splitting rainwater molecules using a renewable energy powered electrolysis machine.

“Nothing else was good enough for us when we had the idea,” Vince said. Which then begs the question, why have a diamond that’s been ripped out of the Earth when you can have one that’s born from the sky?

WHY THIS MATTERS IN BRIEF Ultra thin and ultra flexible batteries made from Graphene could make new types of wearable computing platforms a reality.  …

WHY THIS MATTERS IN BRIEF When electronic systems are manufactured today they’re fixed forever, but in the future they’ll be able to re-configure themselves opening…

WHY THIS MATTERS IN BRIEF Being able to print stable, high efficiency solar cells could one day help companies produce low cost solar panels in…

NASA successfully sequences DNA in space, ushering in better healthcare for astranauts and a new era in space biology For the first time ever, DNA was…

WHY THIS MATTERS IN BRIEF Growing your own products just became a thing.   If you needed to be convinced just how fast technology is…

WHY THIS MATTERS IN BRIEF As our knowledge of materials and how they behave improves we can generate electricity from almost anything.   Scientists have…