All of life was created using just two strands of DNA with 4 nucleotides, so what could we achieve with four stranded DNA that has 8 nucleotides?

It’s probably time to update your knowledge of DNA and what we’re doing with it today, and if you haven’t tuned into my blog before then let’s take you beyond sci fi and into the realm of something much scarier – science fact. Today scientists have already created alien like organisms with six and eight base pair DNA, turned human cells into multi-core computers, made DNA based neural networks and AI’s, and turned bacteria into living DNA computers – as well as creating DNA storage technologies that can pack all the world’s information into a device the size of a shoe box. For starters … and that’s without mentioning the implications of our being able to run two genetic codes simultaneously within cells.

READ
Companies are starting to connect the next 4 billion people

Now though scientists have found that the world’s most famous molecule – the DNA double helix – sometimes doubles up again. Researchers have now found this quadruple-stranded form in healthy human cells for the first time, and bearing in mind that eight base pair DNA would unleash an almost infinite number of amazing “super powers,” that would make even the sci fi media moguls balk, doubling that up again, well, the implications could be universe changing, not just world changing.

Four-stranded DNA has been seen before in some cancer cells and in lab-based chemistry experiments, but this is the first time the molecule has been visualised in healthy, living human cells, as a stable structure created by normal cellular processes.

“We’ve undoubtedly demonstrated that the quadruple-strand DNA forms in living cells,” says Marco Di Antonio at Imperial College London. “This forces us to rethink the biology of DNA.”

The DNA molecule is made up of four nucleobases – adenine, cytosine, guanine and thymine – and can configure itself in a number of ways. It creates a four-stranded structure when four guanine bases form a square – guanine is the only base able to bond with itself.

Di Antonio, who conducted the work while at the University of Cambridge, and his colleagues were able to visualise the quadruple form within human tissue by attaching a new kind of fluorescent marker to DNA in living cells. He says the discovery may improve our understanding of how the genetic material divulges its information.

“We know exactly what DNA does,” says Di Antonio, “but how does the cell know where to express genes and how much protein to make?” The researchers speculate that the quadruplex structure forms to hold the molecule open and facilitate the reading of the genetic code and thus the production of proteins. It may also influence the amount of each protein that is made.

Usually, this function is performed by epigenetic markers – chemical tags on DNA that increase or decrease the activity of genes – and it seems that the quadruplex form of DNA has a similar role.

Zoë Waller at the University of East Anglia, UK, says the work adds to the evidence that the quadruplex structures form part of normal DNA regulation and function, and that our view of the DNA double helix may be out of date.

“We presume that this is the normal, native state of DNA, but this work is another exceptional example of mounting evidence that DNA is not a fixed structure or shape,” she says.

WHY THIS MATTERS IN BRIEF Training AI software and robots in the virtual world will dramatically accelerate disruption and the world’s rate of change.  …

WHY THIS MATTERS IN BRIEF We already live in a sci-fi world, but new technologies and new ways of working are soon going to help… 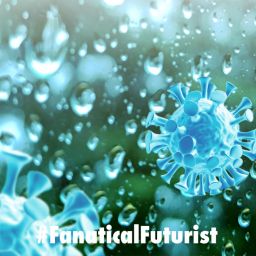 WHY THIS MATTERS IN BRIEF Why let pathogens attack human cells when you can con them into attacking fake ones instead?   Love the Exponential…

WHY THIS MATTERS IN BRIEF Researchers are moving closer to helping fully paralysed people communicate just by thought alone.   “To be or not to…