One day batteries will go away as new materials help us harness energy in more natural and more convenient ways.

Energy is all around us. And in us. In fact we live in a world that’s abundant with energy. But that said in most cases we find it difficult to capture and convert into actual energy that we can use to power our devices, however breakthroughs in everything from manufacturing to materials now mean we are getting increasingly clever at tapping into the energy that’s all around us – whether it’s using the radiation in the air to power the first batteryless smartphones, using nanogenerators to pull energy from our blood streams, or using nanophotonic materials to push the energy conversion efficiency of solar panels from today’s measly 17 percent to a whopping 132 percent.

READ
India to go all in on electric vehicles, sale of combustion engines will end in 2030

Now, in another breakthrough in the field, in a recently published study, a team of researchers from Colorado State University have announced that they’ve developed a “ring-like device that captures heat from the human body and converts it into usable electricity.” In short, future life saving devices and wearable gadgets like a Fitbit will be able to pull power from just your body and skin.

Designed to be worn on the hand the device is part of a new technology wave known as Thermoelectric Generators, or TEG’s. This technology could one day be adapted to fuel internal devices like pacemakers and defibrillators. Moreover, using the human body’s heat energy, wearable electronic devices, like the Apple Watch or Fitbit, can be powered without batteries. 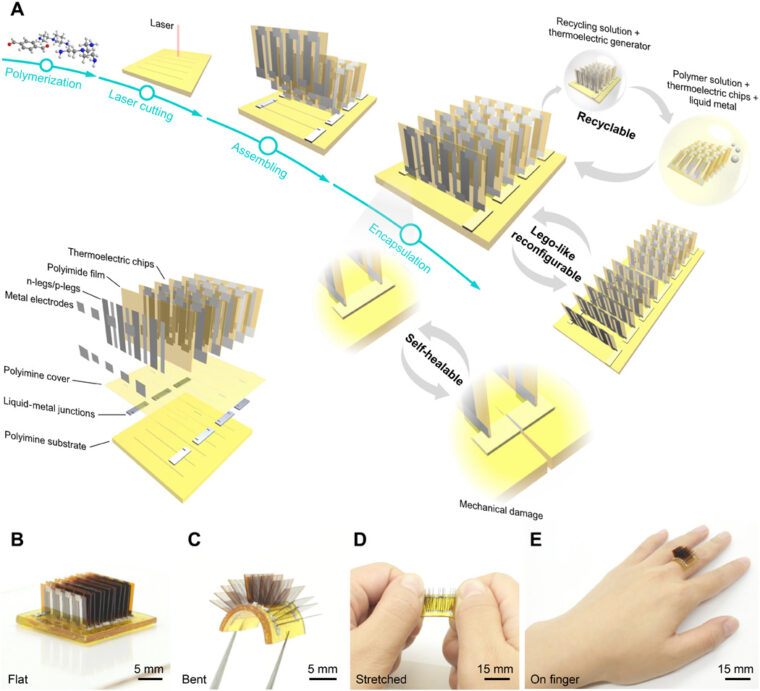 Details about the new technology

“In the future, we want to be able to power your wearable electronics without having to include a battery,” Jianliang Xiao, a professor of mechanical engineering and one of the study’s co-authors said in a prepared statement announcing their exciting results.

“Whenever you use a battery, you’re depleting that battery and will, eventually, need to replace it. [T]he nice thing about our thermoelectric device is that you can wear it, and it provides you with constant power.”

Over the years, micro-electronic devices like pacemakers and internal defibrillators have been developed to improve or even save human lives. Still, like all other electronics, they are fuelled by batteries, and in the case of pacemakers that means surgery. Also, unfortunately, conventional batteries are often made from rare earth metals and other corrosive materials, nearly all of which are not good matches with the human body.

More recently, an entire range of smart wearables like the Fitbit and Apple Watch, smartphones, and other IOT (internet of things) devices have come to the market, dramatically increasing the need for energy on the go. And like those bio-medical devices, this new wave of portable electronics also needs power. Advances in battery technology have helped, but charging them has only added to the growing demand on our aging power grid.

Now, led by Dr. Xiao and his team of researchers have created a device that they hope will lead the way in solving that problem.

“I think there were two major challenges,” said Dr. Xiao, describing the many obstacles they would have to overcome when making a device that can capture body heat and turn it into usable electricity. “How to choose appropriate materials that can be integrated into one single device to achieve the optimal mechanical and thermoelectric performances, and [determining] which high-performance thermoelectric materials have those properties.”

That is a problem, he explained, because “these materials are usually ceramics, which are very rigid and brittle. It’s very challenging to design a device with mechanical compliance that can match with (the) human body.”

Ultimately, the team landed on the right combination of a stretchy material that can better adjust to the human body’s natural movement and a liquid metal core to act as the device’s circuitry.

“We chose the soft polyimine elastomer as substrate and liquid metal as interconnects to ensure outstanding mechanical compliance and stretching performance,” said Xiao, “so that the device can survive very large deformation and can be worn on the human body.”

That ability to deform is critical, allowing the device’s material to stay attached to the skin where the most heat energy can be captured, heat that is otherwise lost to the surrounding environment.

“The idea here is to use thermoelectric devices to convert energy that has otherwise been wasted into useful electrical power. This would add another 5 to 8 percent efficiency to other devices such as internal combustion engines, power plants, as well as of course the human body.”

So, does this mean that humans might one-day power everything, like in the 1999 movie The Matrix?  Xiao says no.

“[The] Human body can [only] convert about 25% of food energy into mechanical output, and I don’t have a number for heat generation. But currently, thermoelectric generation efficiency is typically less than 10%, which is much lower than internal combustion engines.”

Although human heat energy won’t power everything in the future, this type of technology can and likely will generate enough output to power small, wearable, handheld, and even implanted electronic devices. According to the original paper, the device’s outer skin can be equipped with a special material to take advantage of the sun’s heat, further increasing its power generation.

“A wavelength-selective metamaterial film is introduced to the cold side of the TEG to enhance the thermoelectric performance under solar irradiation,” the paper states, “which is critically important for wearable energy harvesting during outdoor activities.”

One other unusual advantage to the ring-like TEG developed by the CU Boulder team is so utterly unexpected that it sounds like something right out of a science fiction movie. If damaged, the generator can allegedly repair itself.

“This device is self-healable,” Xiao explained, “which means if it’s damaged, the device can heal itself, so you don’t need to replace it.” Although few details on exactly how this “self-healing” works were covered in the original research paper Xiao explained it:

“[It’s] because of the special materials we used,” he wrote. “The substrate elastomer is polyimine, [and] within the polymer network, the chemical bonds can break and reform, known as bond exchange reactions. When you bring two broken pieces of such polymer into physical contact, new bonds can be generated across the interface, which heals the material. In addition to that, we chose liquid metal as the interconnecting material, which could also heal itself after damage.”

WHY THIS MATTERS IN BRIEF Over the years tsunami’s have killed hundreds of thousands of people, now scientists think they have a way to stop…

WHY THIS MATTERS IN BRIEF Self-driving trucks are 30 percent cheaper to run and operate than traditional trucks, and within the next ten years they’re…

WHY THIS MATTERS IN BRIEF Renewable energy sources are still, by their very nature, unreliable which is why we need cheap, grid scale energy storage…

WHY THIS MATTERS IN BRIEF There are plenty of situations where we want to test things, such as food and water, to see if they’re…

WHY THIS MATTERS IN BRIEF There are plenty of situations when you want to know what something’s made from, such as food or goods, and…

WHY THIS MATTERS IN BRIEF As more companies become interested, and invest, in flying taxi’s, companies like Airbus and Uber are keen to be at…