Futurist in the press: Maximising the AI Opportunity, Microsoft

AI will help organisations and society at large unlock untold new opportunities, in this report Microsoft discusses how to maximise the upsides while minimising the downsides.

Firstly, thank you to the team at Microsoft for reaching out and asking me to participate in their latest Artificial Intelligence (AI) report “Maximising the AI opportunity” which they released at this year’s Microsoft Future Decoded event. I’m also buoyed to see that, in my opinion at least, the company is taking an optimistic yet pragmatic approach to developing and deploying AI, with one eye focused on helping customers, whether they be business professionals or consumers, derive real benefits from it, with the other eye is firmly focused on trying to minimise AI’s ethical and moral downsides, such as its impact on jobs and society. And as I say in the report, which you can download below, based on what I’m observing as I travel around the world seeing customers and speaking, I believe the latter is what’s making us “re-think what it means to be human,” especially as we continue to see the automation of cognitive work that’s the preserve of so many white collar workers.

There’s no doubt that AI is one of the most transformative technologies of our time, and as what I call a general purpose technology, it’s highly likely that there won’t be any area of our lives, personal or professional, that won’t be touched by it in the long run, and Microsoft, along with a cohort of other large technology companies, are leading the revolution. And as they continue to build out their capabilities, whether it’s building the first generation of imaginative and self-coding AI’s, or teaching AI’s how to cooperate with each other by “teaching” them how to wrangle pigs, I find the work they’re doing in the space fascinating and continue to watch it closely. 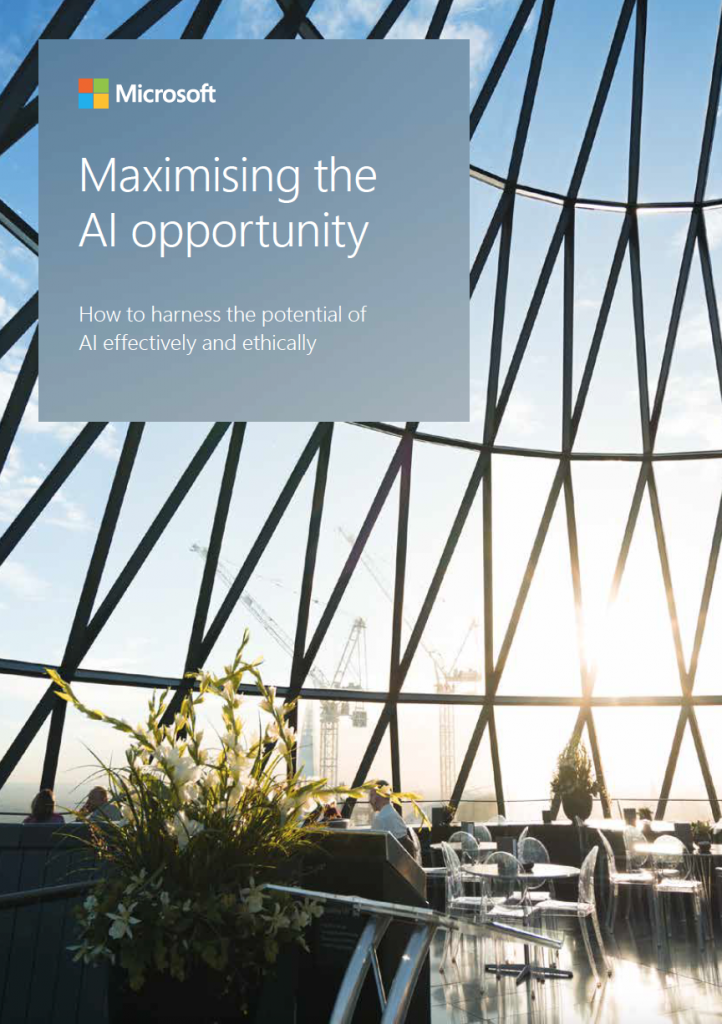 Grab a copy of the report

As the use of AI in business increases though in the UK, and as a society, we are now moving from a period of experimentation into a period of implementation, and personally I feel that we, like Microsoft, need to stay vigilant – ensuring that we collectively maximise the upsides of the technology while minimising the downsides – and it’s a tricky balancing act. After all, on the one hand we’ll be able to recognise giant leaps in capability and productivity across multiple domains, but on the other hand there will inevitably be jobs lost through task and job automation.

As a consequence over the past year I’ve been spending a lot of time thinking about the latter, how we minimise the downsides so AI turns into a win win for everyone and becomes a technology that we embrace rather than fear. It’s this that led me to create my Future of Education 2020 to 2070 report which has now been picked up by the Canadian, German, Singapore, UAE, UK and US governments, as well as several global consulting firms, and the world’s largest K-12 education company, and I’m glad to say that some of the principles of the report now form the foundation of some exciting new life long learning programs.

WHY THIS MATTERS IN BRIEF Being able to read someone’s mind leads down two roads. It can either be used…

WHY THIS MATTERS IN BRIEF Connecting devices to each other and to the internet can make them much smarter, and…