Organisations in the financial services industry have the money, resources and financial need to automate and increasingly no stone is being left unturned.

Goldman Sachs, and, it has to be said most banks and financial services organisations are on an automation tear at the moment, whether it’s Goldman using Artificial Intelligence (AI) to replace its elite traders or trying to move FX trading to the Blockchain, JP Morgan Chase using it to automate its legal work, Bridgewater Associates using it to automate their entire management team, or the rise of fully autonomous hedge funds like Aidyia. And ironically it was just a few months ago when I sat down with a US consulting firm to discuss automating the Initial Public Offering (IPO) process because they felt there was an opportunity to disrupt the economics of the marketplace, in other words, they saw an opportunity to beat the incumbents at their own game in their own back yard.

Now though it looks like Goldman will beat them to it – they’ve identified over 127 steps in the IPO process and they reckon that at least half of them can be automated. Meanwhile across the way at JP Morgan they’ve identified about 164 steps in the IPO process and they think that they can all be automated so go figure… maybe JP Morgan is less efficient? Yes guys I too feel your pain, it’s never nice to be beaten by Goldman.

In Goldman’s case they’re looking to cut out thousands of hours worth of IPO work using what’s increasingly becoming a universal system called “Deal Link” that’s already replaced some of the informal checklists that were once tended and passed down between generations of rainmakers, and today the system arranges and tracks legal and compliance reviews, fills in forms and generates reports.

As I think you’ll agree – it seems that it’s getting all the fun jobs. Dang computers.

The initiative’s sudden rise to prominence, which has been described by senior Goldman Sachs executives in recent interviews, shows how quickly big investment banks seem to be able to turn the crank handle on the automation machine and automate tasks that were once beyond the reach of computers, and as the industry comes under pressure to increase profitability it’s hard to see how that handle isn’t going to go into overdrive soon – especially as young workers are less willing to put in 18 hour days, their words not mine.

While many people fear that automation is increasingly going to take their jobs Goldman says that automation will help people focus on “higher cognitive tasks” and “more interesting work” rather than eliminating jobs – a statement whose irony I’m sure isn’t lost on their equities traders who went from 600 to just 2 in a couple of years after their division was “computerised”.

The IPO program is the brainchild of George Lee, Goldman’s investment banking CIO and long time adviser and confidant to the Silicon Valley elite who’s focused on two key goals – digitising bankers’ workflow and using technology to enhance their advice to clients.

While Goldman has expressed an interest in automating parts of the IPO process for years, for example, when Martin Chavez mentioned it publicly back in September 2015, when speaking as the then CIO, it’s never before detailed the efforts publicly in such depth.

In the beginning, Lee and his team took aim at the most obvious steps for disruption such as the routine phone calls, E-Mails and tasks that young bankers have to plough through at the beginning of every IPO that included everything from phoning the compliance department to look for potential conflicts and contacting legal through to assigning lawyers and compiling an organisational book for meetings. Now however that’s all done with the click of a mouse in the new application and hot links trigger processes or fill in forms and information used across multiple forms is populated automatically.

The firm also streamlined the way that it delivers updates to clients about IPO orders, sending instantaneous details about pricing, size and timing to a phone or tablet application, says Lee. In the past, that would have been a static report that Goldman Sachs E-Mailed or faxed to the client’s hotel at the end of the day.

And they’re not stopping there, having examined the IPO process they’re now turning their attention to other areas of the business such as corporate mergers and bond sales and they’ve identified and mapped more than 150 steps across the various investment banking transactions that are handled by the 2,500 bankers in the division – now, hundreds of hours initially saved on IPOs is soon going to swell into tens of thousands across the business.

“What we are trying to do is slowly but surely pick off the [areas of our business] that are the most redundant, the most repetitive, the most labour intensive, and automate them so that you save time,” said Lee, and Goldman has a history of innovating to earn more from IPOs.

In the 1940s and 1950s, senior partner Sidney Weinberg elevated relationship banking to a new level, eventually working personally with the Ford family for years to take their carmaker public, running what was then the biggest ever IPO, and that built the bank’s franchise. Then, in 1984, when Eric Dobkin was asked to improve its ninth place ranking in stock underwriting, he pushed to sell large blocks of new shares to institutional investors. The strategy replaced a longstanding model relying on thousands of regional brokers to peddle stock to retail investors, and the modern IPO market was born.

READ
Fortnite's new experimental mode is all about partying, not fighting

This year Goldman ranked 6th among global IPO managers, it’s worst position in the league tables since 2012 but, with IPO fees on average sitting at around the 7 percent mark for mid sized transactions the market’s still a very lucrative one.

Goldman’s latest effort has mainly helped to erase grunt work for analysts and associates, the bottom rungs who are paid a measly $320,000 on average compared to $490,000 for VP’s and $860,000 for directors. In the lofty realms of Wall Street, they’re relatively “cheap,” says Brad Hintz, a former CFO at Lehman Brothers, but terminating a significant number of bankers from the lower tiers to save money could create new problems in the long run, says Hintz, because banks replenish their senior ranks by promoting from that pool.

“[Goldman] would risk ossification,” he says.

It’s for this reason, says Lee, why the new system is being designed to let those employees pursue more productive work. They can help draft filings used to communicate with investors and register with the Securities and Exchange Commission (SEC), shape marketing strategy or spend more time talking with clients.

So far, according to the firm, there’s been no impact on headcount or hiring, which in itself would be an interesting achievement if it continues to play out that way, and if that’s the case then they’re not alone – Accenture, for example, recently announced they automated 17,000 jobs without making anyone redundant the business too so I’ll keep an eye out to see if things stay that way.

While Goldman’s new approach may seem obvious it’s cutting edge for Wall Street where the conventional wisdom has long been that investment banking was too reliant on human to human interactions, and that trading was easier to automate. Banks also lacked investment dollars for new projects as they battled fines, investigations and revenue pressures after the financial crisis but that’s beginning to change. JP Morgan is using machine learning to predict when clients might need to raise capital through a secondary equity offering, and start ups abound. Kognetics, for example, uses a similar system to find and catalogue data to identify attractive acquisition candidates in the tech industry.

“There is an ecosystem pushing toward more automation,” said Matthew Dixon, an assistant professor at the Illinois Institute of Technology’s business school, and as a result Wall Street’s online chat rooms are rife with young workers worrying about their future, and rebuttals from optimists who predict relationship banking will largely be immune to automation – something that I, and the Managing Director of Barclay’s Premier, who I interviewed recently, would largely agree with, for now, but note that we’re talking about relationship based banking – after that everything else is up for grabs.

Lee for his part insists that, at least for the foreseeable future, there’s plenty of demand for uniquely human ideas, and for anyone at Goldman who may have such a concern, he has a simple answer.

“Our strategy is to elevate the activity and impact of bankers,” he said, “not replace it.” 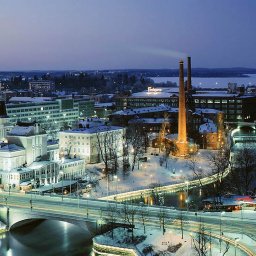 Finland rolls out its universal basic income scheme to 2,000 citizens

WHY THIS MATTERS IN BRIEF Scientists have demonstrated that an impossible space drive that doesn’t need fuel and that defies physics might actually work, if…

WHY THIS MATTERS IN BRIEF All of today’s military machines and apparatus are defenceless against hypersonic weapons, and the US military needs an answer to…

WHY THIS MATTERS IN BRIEF AI is getting increasingly capable at creating quality synthetic content, and that includes books, scripts, and worlds.   Today we…

WHY THIS MATTERS IN BRIEF As investment flows into new battery tech Lithium Ion suddenly has a whole host of new competitors to contend with….

WHY THIS MATTERS IN BRIEF AI is taking on more and more challenges, and “grunt work,” and now it’s starting to design our cities and…

WHY THIS MATTERS IN BRIEF Everyone tells us aircraft can fly by themselves, now they really can, and this is just the first step of…

WHY THIS MATTERS IN BRIEF A lifetime of education might one day be condensed into minutes.   Scientists believe they may have taken the first…