There are plenty of situations where we want to test things, such as food and water, to see if they’re safe without actually tasting them ourselves, and now you can.

Artificial Intelligence (AI) that can generate new flavor combinations from scratch is nothing new, even if it’s still cutting edge, but what about models that can taste those flavors like a human can in order to figure out or assess just how good or bad they actually taste? In a recently published paper and an accompanying blog post, researchers at IBM Zurich detailed HyperTaste, an artificial tongue designed to fingerprint beverages and other liquids “less fit for ingestion,” and who knows, one day it might be used alongside another team of researcher’s digital nose that can sniff out drugs, and even disease better than our canine friends.

In IBM’s case research staff member Patrick Ruch suggests that their new system could be used to guarantee supply chain safety for food and drinks, who noted that there’s currently little to verify that packages contain what’s on the label apart from conducting costly DNA experiments as happened recently with the UK horse meat scandals that rocked the country where suppliers acting in bad faith swapped out beef and other meats for horse meat. Meanwhile, elsewhere, counterfeiters could also “fake” a real product by adding just a few extra chemical compounds that could trick conventional testing systems. 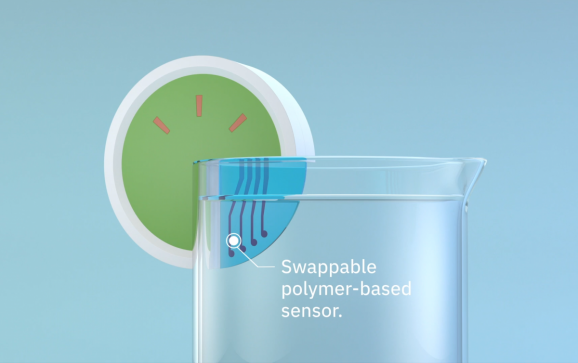 “There are many substances out there that we would like to ‘taste’ without actually putting them in our mouth. Consider a government agency interested in an on-the-fly water quality check of a lake or river at a remote location, a manufacturer wanting to verify the origin of raw materials, or a food producer trying to identify counterfeit wines or whiskeys,” wrote Ruch. “[The problem is that] man-made sensors … have [historically struggled] to approach the ease with which our taste buds recognize substances.”

Ruch notes that capabilities offered by today’s cutting-edge “tasting” machines tend to be specialized and optimized for per-molecule sensing. By contrast, Hypertaste targets compounds comprised of many different molecules with a combinatorial approach: Its individual sensors respond simultaneously to different chemicals. This makes it difficult to fool, notes Ruch, because there’s no single substance on which the identification relies.

Hypertaste leverages an array of electrochemical sensors containing pairs of electrodes coated with a specially synthesized polymer, each responding to the presence of a combination of molecules by means of a voltage signal. The combined voltage signals of all pairs of electrodes represent a given liquid’s digital fingerprint, which is relayed to off-the-shelf electronics configured to transmit them to a smartphone app and subsequently a server.

In the cloud, a trained machine learning model compares the fingerprints to a database of known liquids, figures out which liquids are most chemically similar, and reports the results back to the app. Adding new liquids to the database involves measuring the voltages in target liquids multiple times and feeding the data to the model, which extracts the associated characteristic features. IBM says that in its proof-of-concept, but that the entire process takes less than a minute.

Ruch expects that Hypertaste will one day be able to fingerprint “more challenging” liquids, like a person’s urine. This could not only inform an assessment of overall health, Ruch posits, but enable the sub-grouping of patients in clinical trials by matching metabolic responses to treatments, and let’s face it that’s one liquid you’re not going to want to taste so that’s better left to a machine…

“The spectrum of possible applications is vast and spurs the imagination,” wrote Ruch. “We are confident that, through forthcoming refinements, the use of AI-assisted, portable chemical sensors will meet the needs of many industries when it comes to the fast and mobile fingerprinting of complex liquids.”

WHY THIS MATTERS IN BRIEF Coronavirus tests have been in very short supply, and many simply don’t work, so wearables are being bought in to…

WHY THIS MATTERS IN BRIEF Dubai is a city that was gifted nothing, and had to build and earn everything, and it was a great…

WHY THIS MATTERS IN BRIEF The new global arms race involves weaponising AI and robots, lasers, telepathy, and hypersonic weapons.   Interested in the Exponential…