The ability to genetically sequence Covid-19 in real time means governments can slow its spread and and create vaccines faster.

As the deadly new coronavirus pandemic, COVID-19, permeates the planet, scientists are using genetic sequencing and an open-source software tool to track its transmission in real time and create a rich set of data that could be used to help develop a vaccine for it – something that even five years ago wouldn’t have been possible.

The software tool, called Nextstrain, can’t predict where the virus is going next. But it can tell us where new cases of the virus are coming from. That’s crucial information for health officials globally, who are trying to determine whether new cases are arriving in their countries through international travel, or being transmitted locally.

This type of analysis, called genomic epidemiology, “is extremely valuable to public health,” says James Hadfield, a computational scientist working on Nextstrain. “The sooner we can turn around this data, the better the response can be.” 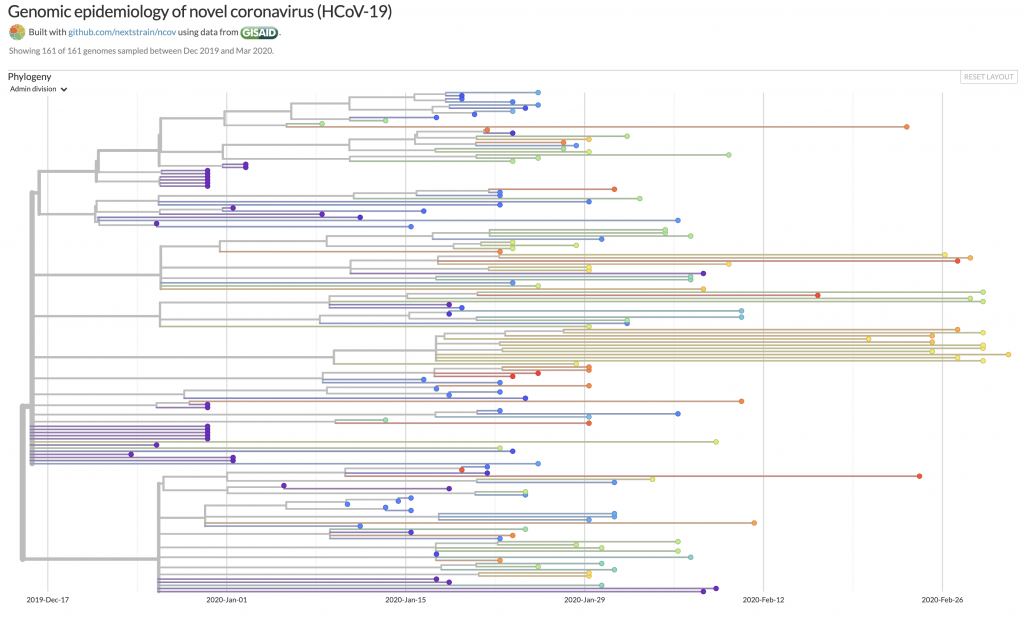 The novel coronavirus, which causes the respiratory disease COVID-19, first emerged in December in China, where it has infected over 80,000 people. It has since spread to more than 85 countries, with the largest concentrations of cases so far in South Korea, Iran, and Italy.

As new cases emerge it’s important to determine the virus’s origin, whether the infected person contracted the virus locally or in another region, so that that information can be used to inform decisions on travel restrictions, school closures, quarantines, and where to focus resources to contain the outbreak.

Genomic analysis can provide clues about a virus’s origin. During an outbreak, a virus’s genetic code will steadily mutate as it spreads through a population. The mutations are slight though, often just a single letter change in the code, like from AATC to ATTC so by sequencing them the team behind the initiative can use these mutations to help them create a time and geographical stamp of sorts.

By comparing the genetic codes of viral samples taken globally it’s then possible to construct a map of the virus’s mutations as it moves around the world. And that’s what Nextstrain does.

READ
Scientists are starting to classify ageing as a disease

“We rely on the presence of these naturally occurring genetic mutations to inform our visualizations of the virus’s spread,” says Hadfield.

Nextstrain charts a virus like a family tree, or evolutionary timeline. For coronavirus, that family tree originates in the Chinese city of Wuhan, and branches out from there. When new cases pop up, the genetic code of those viral samples can be compared to those in the database to determine its region of origin.

For example, in the US, researchers have read, or sequenced, coronavirus genomes from eight cases in California. Of those, at least six were genetically distinct from each other, suggesting that they had all hitched rides to the US through international travel, says Hadfield.

“What we can say from the genomic data is that there have been what looks like at least six independent introductions of the virus into California,” Hadfield says. “That’s not to say that ongoing local transmission in California is not occurring, but that the genomic data has not yet confirmed that.”

By contrast, the Seattle region has become a site of community transmission, according to Nextstrain’s analysis. The software compared two cases, one sampled in mid-January and the other sampled in late February, both in Snohomish County, near Seattle. The viruses were found to be genetically similar, suggesting local transmission.

Trevor Bedford, an investigator at the Fred Hutchinson Cancer Research Center, who co-developed Nextstrain, says that in the six weeks between the first and second cases, undetected community transmission was likely flourishing.

The Nextstrain endeavor relies, of course, on scientists being willing to obtain and sequence viral samples and upload them to freely accessible websites. And so far, researchers globally seem willing. Most are uploading sequencing data into the publicly available repository GISAID, says Hadfield. That’s where the Nextstrain team accesses its data, he says.

Scientists in resource-limited areas may not have the laboratory tools or training they need to perform this type of analysis. So a group called ARTIC Network has been providing protocols and training to enable scientists globally to perform disease surveillance and sequencing. They’re also developing a “lab-in-a-suitcase” using a portable gene sequencing tool called MinION that was first used on the International Space Station to test astronauts genomes for mutations in space some years ago, and that can be deployed to remote and resource-limited locations.

One success story came out of Brazil last week. In fewer than 48 hours, researchers collected a sample from an individual in São Paulo with coronavirus, sequenced the genome of the virus using ARTIC protocols, and shared the data on GISAID.

WHY THIS MATTERS IN BRIEF When people loose a limb the prosthetics they use don’t offer any form of tactile or sensory feedback, this new…

Police use DNA to create photofits of criminals

WHY THIS MATTERS IN BRIEF Many crimes go unresolved because there are no witnesses but now a new technique can create photofits from fragments of DNA….

WHY THIS MATTERS IN BRIEF Today lots of things are based on companies ability to assess your circumstances and personality, and now they have a…

WHY THIS MATTERS IN BRIEF One of life’s mysteries is why life exists in the first place, and the mystery of consciousness comes a close…

WHY THIS MATTERS IN BRIEF Summit crunched through thousands of compounds in days to find compounds that could be used in a COVID-19 vaccine.  …

WHY THIS MATTERS IN BRIEF Being able to diagnose cognitive conditions using just a smartphone, even if you have no formal access to healthcare, will…

WHY THIS MATTERS IN BRIEF Metalenses are revolutionary – they’re nano-thin and flat which makes them the future of camera technology, now they could be…