3D printing can be used to make artificial human hearts, but on the other it can also be “weaponised” in increasingly sophisticated ways.

3D printing is being used for all kinds of benign purposes today – from 3D printing clothes and sneakers, through to brain tumors, buildings, electric cars and electronics, and entire rockets. It’s also been used to 3D print guns and grenade launchers, explosives and munitions, and even nuclear reactors, on demand. And now, to up the ante, Raytheon, in a world first, have just announced that they’ve 3D printed their first guided missile.

Raytheon has been using and experimenting with the technology for years now, especially in the prototyping process. Now, however, the company says that they have 3D printed just about every component needed for a guided weapon. This includes the 3D printing of the rocket engines, the parts for the guidance and control systems, the fins on the missiles themselves, and more. Furthermore, Jeremy Danforth, an engineer at Raytheon, says that the potential is there for missiles to be 3D printed on demand in the field, as needed – and that is another game changer because it means that the world’s military will no longer necessarily have to stock pile tens of billions of dollars worth of expensive weapons.

Like many other high-tech firms, Raytheon has been looking more and more toward 3D printing as a means of fabricating products including the 3D printing of electronic circuits. They are currently in the process of developing a means to print out complex circuits as well as tiny microwave components which can be used in the production of the company’s Patriot air and missile defense system — a long-range, high-altitude, all-weather system that that can counter threats from tactical ballistic missiles, cruise missiles, and even aircraft/drones. 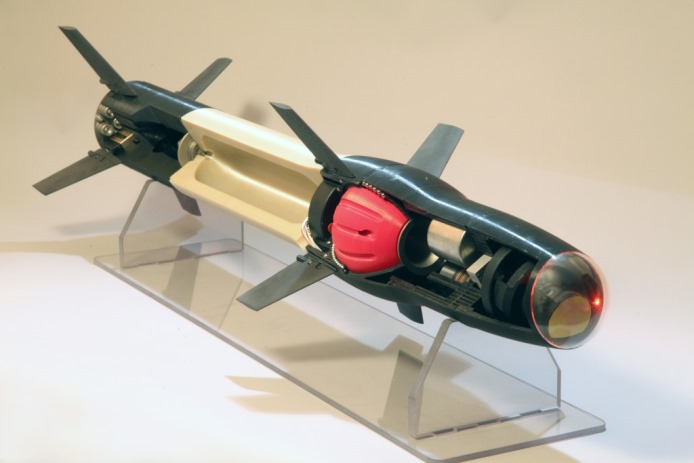 A cut away of the new 3D printed missile. Courtesy: Raytheon

“When we print something, we have fewer piece parts, so your supply chain becomes simpler,” Leah Hull, additive manufacturing manager for Raytheon, said. “Your development cycles are shorter; you’re getting parts much faster. You can get a lot more complex with your design because [you can design] angles you can’t machine into metal.”

Hull believes that someday the 3D printing of missiles will become a streamlined process that allows for soldiers to print and assemble missiles on the spot. While we are still a ways off from this becoming a reality, due to the fact that a more consistent production method will need to be developed in order to ensure safe, accurately performing weapons, Raytheon already has proven that it’s possible to 3D print these weapons.

“Before a warfighter can print a missile in the field,” Chris McCarroll, Raytheon director for the Raytheon University of Massachusetts Lowell Research Institute, explained, “you need [a] quality, controlled processes to fabricate all the component materials: the metallic strongbacks, and the plastic connectors, the semiconductors for processors, and the energetics and propulsion systems. The hard part is then making the connections between these components, as an example, the integrated control circuit that receives the command to light the fuse. At some relatively near-term point you may have to place chips down and interconnect them with printing. Or, in the future, maybe you’ll just print them.”

Jeremy Danforth says that Raytheon is currently in the process of 3D printing “demos of many of the seeker components” for their missiles, and other companies have been 3D printing warheads. He says that, so far, his company has printed 80 percent of what would go into an entire working missile.

READ
Ingenious new fabric cools you down and warms you up

Of course this brings up the potential that this technology could get in the hands of the wrong people, but that would still require a lot of know-how, at this point in time, in order to develop a precise weapon of the caliber that Raytheon’s missile systems are capable of  – however in time, as with happens with all technologies, they’ll eventually get into the wrong hands, probably after someone somewhere open sources the designs for such systems.

In the meantime Raytheon is focused on continuing to move toward 3D printing as a replacement for much of their other subtractive methods of manufacturing. It saves them time, money, and material, while also making what was previously impossible to manufacture, now very possible.

“You can design internal features that might be impossible to machine,” explained Raytheon engineer Travis Mayberry. “We’re trying new designs for thermal improvements and lightweight structures, things we couldn’t achieve with any other manufacturing method.”

Raytheon is currently using both high-end 3D printers and their own custom modified lower-cost machines to print both functional and non-functional objects and components. Replacing older subtractive methods of manufacturing with these newer additive methods (3D printing) means that instead of using a large amount of material to create components which are almost microscopic, Raytheon is now turning to 3D printing as a means to lay down these tiny components one layer at a time, wasting literally nothing in the process.

“There’s currently a hierarchy in our manufacturing. We make the structures, the housings, the circuit cards, with the right materials, and then we integrate them into a system,” said McCarroll. “What we see in the near future is printing the electronics and printing the structures, but still integrating. Eventually, we want to print everything together. An integrated system,” he added.

WHY THIS MATTERS IN BRIEF When satellites and rockets burn all their fuel they inevitably fall back to Earth and crash, but what if they…

WHY THIS MATTERS IN BRIEF Caltech have built a new kind of microchip that can learn to heal its own information pathways.   One of the…