People who are in need of organ transplants often have to wait for someone else to pass away, this latest breakthrough would mean breaking that cycle.

Have you ever wanted to grow a heart in a jar? Well, we accomplished that a little while ago. Or a brain in a jar? Well, you’re in luck there too. But what about growing a liver in a jar? Okay, probably not but if you wanted to then now you’re in luck and you can and while growing a liver in a jar might not be top of your wish list it’s a breakthrough that could change organ donation and people’s lives forever.

This week scientists announced they’ve successfully transplanted functional miniature livers into rats after growing the bioengineered organs in the lab from nothing more than reprogrammed human skin cells.

The experiment, which gave the animals working livers could lay the groundwork for future treatments to address terminal liver failure – a disease that claims the lives of over 40,000 people in the US every year.

While there’s still a lot of work to be done before the technique can directly aid human patients, the researchers say their proof of concept may help underpin a future alternative to liver transplants, which are often incredibly expensive procedures to perform, in addition to being strictly limited by donor supply.

Another positive outcome would be using the approach to temporarily augment failing liver function in patients, lengthening people’s lives while they’re on the waiting list for these vital organs: a situation facing about 14,000 Americans at any given moment, most of whom won’t ever receive a transplant.

READ
Babies from artificial eggs, researchers herald the end of mum and dad

“The long-term goal is to create organs that can replace organ donation, but in the near future, I see this as a bridge to transplant,” explains pathologist Alejandro Soto-Gutiérrez from the University of Pittsburgh. “For instance, in acute liver failure, you might just need hepatic boost for a while instead of a whole new liver.”

To grow their mini livers, the researchers took human skin cells donated by volunteers and reverted them to a stem cell state, known as induced pluripotent stem cells, from which other kinds of cell types can be derived. 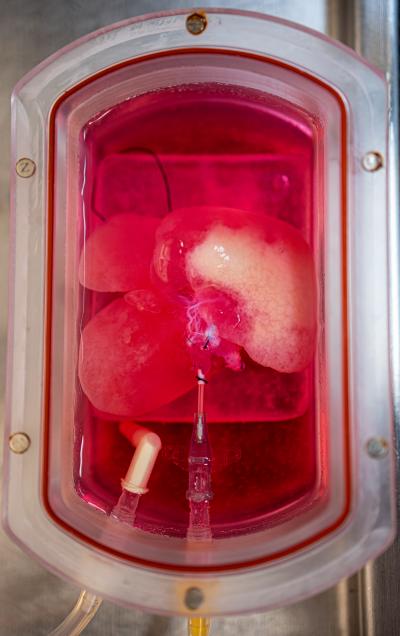 The new mini liver close up

The researchers then induced differentiation in the cells with the aid of hormones and other chemicals, prompting them to become liver cells, which were cultured in the lab.

While it ordinarily takes two years for a human’s liver to mature from the moment of their birth, the researchers were able to grow their miniature analogues in only a matter of weeks, seeding the grown cells on a rat liver scaffold that had been stripped of its rat cells.

While previous experimental liver graft research has incorporated rodent cells onto the scaffold, here the researchers used the human stem cells to populate the liver’s functional tissue, along with its vascular system and bile duct network.

When transplanted into five rats, the mini livers appeared to be functional. After four days – at which point the animals were sacrificed and dissected – tests revealed that the bioengineered livers secreted bile acids and urea; human liver proteins in the animals’ blood were another sign that the organs were working.

Not that the transplants functioned perfectly. Evidence of poor blood flow into the graft, in addition to thrombosis and ischemia, reveals there are still serious difficulties in properly connecting grafts like these to an animal’s vascular network.

Nonetheless, it’s still a remarkable achievement. For a short time, five rats lived their lives with miniature human livers, which isn’t something that’s ever been demonstrated before, and it could bring us closer to employing the same techniques for the benefit of human patients one day.

That day might be a long time away, perhaps a decade off, the researchers suggest, although it depends on a huge range of future experiments succeeding, including demonstrating that these kinds of engineered transplants are safe for humans, which remains to be seen.

In the meantime, methods like this – including work pioneered by the same laboratory last year – could enable the use of such mini organs to study simulated diseases and test different treatment options.

“I believe it’s a very important step because we know it can be done,” explained Soto-Gutiérrez. “You can make a whole organ that can be functional from one cell of the skin.”

The findings are reported in Cell Reports.

WHY THIS MATTERS IN BRIEF Today plastics are made from harmful fossil fuels, but this new process eliminates them from the manufacturing process.   Interested…

WHY THIS MATTERS IN BRIEF The new global arms race involves weaponising AI and robots, lasers, telepathy, and hypersonic weapons.   Interested in the Exponential…

WHY THIS MATTERS IN BRIEF As gadgets demand for power increases charging times will increase, this new thin film battery will charge your gadgets faster…

WHY THIS MATTERS IN BRIEF Hundreds of millions of people suffer every day from chronic disease, pain and illness but now a new class of…