You are used to being tracked everywhere you go online but offline? Prepare for a world where there is no hiding place.

Iris recognition has been used as a biometric for access control applications for many years but over the past couple of years it’s played second fiddle to fingerprint scanning as a means of identification and authentication. And that’s despite the fact that fingerprint scanners can be fooled and fingerprints themselves can be cloned using new hi-resolution 3D printing techniques, such as those used by the FBI recently to unlock a suspects iPhone.

Over the past few years iris recognition has come a long way. Mark Clifton, Vice President of the Products and Services Division of SRI International calls the iris a “protected” biometric as typically it’s unlikely to be injured and it’s unlikely to be contaminated as fingers or hands might be.

The iris is also a more complex biometric, providing around 250 points of identification versus the 13 or so in a fingerprint and therefore it’s usefulness as a tool to authenticate and identify individuals is more accurate, and far more reliable. For example,  the rate of false positives is about 1 in 1.4 million for a single iris scan and if both eyes are scanned then this shrinks drastically to 1.4 trillion. In contrast fingerprints generally yield a false positive every 100,000 scans. In short iris scanning is a much effective means of identification.

But, unlike the technologies that have gone before it the new product, called “Iris on the Move” or IOM is contactless. And that’s the key point. Contactless biometric technologies are not necessarily new but they’re improving at an almost exponential rate and we are rapidly moving from a world where you have to hold your eye, or fingers, near a detector to a world where you can be scanned, identified and analysed on the move – at pace.

IOM can identify 300 people per minute walking in full stride from a distance of 40 feet with no need for individuals to look directly into the device and it works indoors and outdoors irrespective of the lighting conditions.

As someone walks through the system, a high resolution camera instantaneously finds their face and eyes, illuminates them using near-infra-red light, scans and authenticates them. All, to excuse the pun, in the blink of an eye.

“As long as your eyes are open and we can see your irises, we can process them,” says Clifton.

As for how a company might get hold of your iris print though think of Government organisations – particularly border agencies like the UK Home Office and UK Passport Office or the US Borders and Customs Agencies who are increasingly snagging more and more biometric data from you in order to verify and issue your passport. Or Samsung…

While the technology has many advantages over traditional methods – it’s faster for one and doesn’t involve you shoving your head or hand in a hole there are inevitable privacy concerns, especially in the United States. However, according to Clifton people are often willing to give up “privacy” if there is an advantage, such as convenience.

“When you think about the amount of personal information people give up on social media, they shouldn’t worry about someone having their face or iris,” says Clifton.

As for myself I have a more cautious view of the technology. Used wisely it’s another valuable tool in the security services kit bag that will help them identify and track more criminals and terrorists, keeping people safer and away from harm. But, when combined with the increasing adoption of facial scanning technology, remote fingerprinting and emotion tracking technologies and the ultimate biometric authentication system – the ability to sense, analyse and record people’s individual brain waves at a distance we’re going down a potentially dangerous societal rat hole that has the Minority Report written all over it.

What’s more is that most people have no idea that we have already started our descent, sit back and enjoy the ride. Eyes wide open of course. 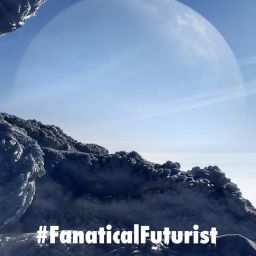