Renewables are the future, but the electricity they generate needs to be stored so it can be used when you need it, now your house can be the battery.

As more people around the world consider powering their homes using solar panels and coming off the gas grid they’re still stuck with the problem that when the sun fades those panels stop producing electricity. Today we solve that problem by storing the energy those panels produce during the day in Lithium Ion battery packs, like the ones sold by Elon Musk’s SolarCity, on their walls, and tomorrow we’ll solve the problem by simply having solar panels that work at night – as well as in cloudy weather and even on rainy days.

READ
IBM boosts the speed of homomorphic encryption by 75 percent

Now though when it comes to storing electricity at home cheaply there’s another alternative looming after researchers at Washington University in the US found a way to convert standard red bricks, which are some of the world’s cheapest and most familiar building materials, and which can now even weirdly replicate themselves using bacteria to create more, into energy storage units that can be charged to hold electricity like a battery. 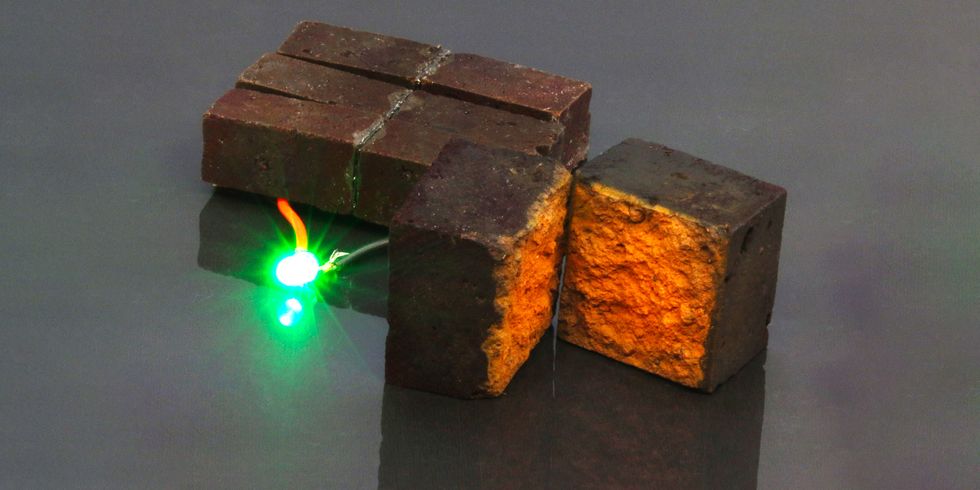 A battery brick – who knew!?

The researchers have developed a method to make or modify “Smart bricks” that can store energy until required for powering devices. The method converts bricks into a type of energy storage device called a supercapacitor.

“Our method works with regular brick or recycled bricks, and we can make our own bricks as well,” says Julio D’Arcy, assistant professor of chemistry. “As a matter of fact, the work that we have published in Nature Communications stems from bricks that we bought at Home Depot right here in Brentwood (Missouri); each brick was 65 cents.” The proof-of-concept study shows a brick directly powering a green LED light.

Walls and buildings made of bricks already occupy large amounts of space, which could be better utilized if given an additional purpose for electrical storage. While some architects and designers have recognized the humble brick’s ability to absorb and store the sun’s heat, this is the first time anyone has tried using bricks as anything more than thermal mass for heating and cooling.

“In this work, we have developed a coating of the conducting polymer PEDOT, which is comprised of nanofibers that penetrate the inner porous network of a brick; a polymer coating remains trapped in a brick and serves as an ion sponge that stores and conducts electricity,” D’Arcy says.

The red pigment in bricks, Iron Oxide, better known as rust, is essential for triggering the polymerization reaction, and the researchers’ calculations suggest that walls made of these energy-storing bricks could store a substantial amount of energy.

“Advantageously, a brick wall serving as a supercapacitor can be recharged hundreds of thousands of times within an hour. If you connect a couple of bricks, microelectronics sensors would be easily powered.”

WHY THIS MATTERS IN BRIEF Hydrogen powered and Lithium Ion battery powered electric vehicles have been battling for dominance for years, and now fuel cell…

WHY THIS MATTERS IN BRIEF New technologies are hitting the roads faster than expected, self-driving trucks which many analysts said were years, if not decades…