There’s no doubt that China’s AI in education initiative will bring a wide range of benefits and improve educational outcomes, but questions remain about the best way to deploy it.

Last year China unveiled their ambitious plan to become the world leader in Artificial Intelligence (AI) research and deployment by 2030. In the roadmap the country’s Central Government made it clear that not only did they want to expand their research and development capabilities but also find new ways to implement its use across every sector of their society, from industry, where it’s being used to monitor the brain waves and emotional wellbeing of workers, to policing and defence, and even urban planning. Recently though it’s been revealed that education is also a target and that several new AI innovations are already being tested in Chinese schools to “redefine how children are educated.”

While the broader deployment of AI and especially facial recognition software in many other countries is all too often mired in controversy, especially over concerns of accuracy, bias, and obviously personal privacy, the Chinese central government, which doesn’t have to be beholden to anyone, has no such constraints. Now a report from People.cn, a state-run media news outlet, has revealed that a high school in Eastern China is testing a new facial recognition system that monitor students, and their levels of engagement, in real time.

The “intelligent classroom behaviour management system,” as it’s called scans the room every 30 seconds logging both the behaviour of the students as well as their facial expressions. The system can identify seven moods, including afraid, angry, happy and sad, by simply analysing a student’s face. Meanwhile a camera perched on top the blackboard at the front of the classroom also tracks six types of behaviour, reading, writing, hand raising, standing up, listening to the teacher, and even leaning on the desk.

It’s unclear what the ultimate goal of the technology is at the moment but we can take an educated guess, but Zhang Guanchao, the school’s vice principal, is reported as saying the system is “both helping track student attendance and assisting teachers in refining their teaching methods.”

READ
Robo journalists covered the US election for the Washington Post

While it is fair to say the technology could be incredibly useful in helping teachers optimize their classes to maximize student engagement and improve learning outcomes, critics of the new system point out that it could easily be used to surveil students and penalise the ones who are slacking off.

One student in the test school was reported as saying, “Previously when I had classes that I didn’t like very much, I would be lazy and maybe take a nap on the desk or flick through other textbooks. But I don’t dare be distracted since the cameras were installed in the classrooms. It’s like a pair of mystery eyes are constantly watching me.”

And he’s spot on.

In an even more striking and widespread implementation of AI into the education system, another recent report, this time from the South China Morning Post (SMCP), claimed one in four Chinese schools were “now experimenting with computer software to grade essays,” an idea we’ve also seen the UK government cosy up to. In China’s case though the software has allegedly been in development for almost a decade using deep learning algorithms to constantly learn and refine its ability to understand and evaluate a student’s work.

It’s currently estimated that 60,000 schools are testing the technology and it already reportedly performs at the same level of a human maker 92 percent of the time. One researcher working on the project said to SCMP, “It has evolved continuously and become so complex, we no longer know for sure what it was thinking and how it made a judgment.”

Automated marking systems are obviously not an entirely new idea though. While computer assisted marking software has been around for almost as long as computers, it has only been in the last decade or two that computers have begun to be used for marking more abstract student work, such as creative essay writing. Again debate in the West rages over how accurate and appropriate machine grading systems are, but in China these systems can be implemented with degrees of scale and at speeds that are unprecedented anywhere else in the world.

China is currently training its neural network grading system in a central server that compiles the work of millions of students. As well as promising a potential way to take out the variations attributed by human subjectivity in marking, this system undoubtedly offers the central government a remarkable ability to track the progress of all students in the country, in real time.

In addition to all this it’s also easy to see how this all encompassing education monitoring system could one day be hooked up with the country’s innovative but contentious Social Credit Scoring System that evaluates people’s behaviours and rewards or penalises them, accordingly. The system even goes so far as to block people from accessing trains and planes, the internet and loans, if their score falls to low.

Social credit scores can also fluctuate based on how well a person abides by what the government deems to be “good social behaviours” including how well they toe the party lines. The system has been tested in a number of provinces over the past few years and one school was recently reported as banning the enrolment of new students whose parents have low social credit scores. Ouch!

China’s insistence on integrating AI systems into its entire social ecosystem with no push back or oversight from independent bodies is having the effect of turning the entire country into a massive social experiment and how the experiment will turn out is anybody’s guess. While critics will view the entire experiment as, perhaps, an ode to a dystopian future, we also shouldn’t loose sight of the fact that managed correctly, by good stewards, the system also has the power to do amazing good.

WHY THIS MATTERS IN BRIEF D-Wave doubles the qubits and boosts previous models performance by 1,000 fold.   Forget logic based servers D-Wave Systems, the controversial quantum…

WHY THIS MATTERS IN BRIEF We’re always told ai cannot be imaginative or creative, but human creativity can be cloned.   Recently art made by…

WHY THIS MATTERS IN BRIEF In time all adverts, and the majority of content, will be created by AI, and people won’t be able to…

WHY THIS MATTERS IN BRIEF AI’s are getting better at creating and generating synthetic music, and some of them are starting to get signed by… 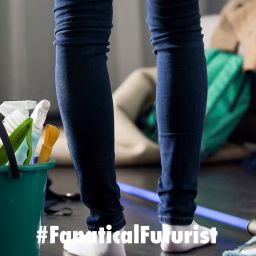 China certainly has all that is needed for a successful integration of AI to the classroom!