As lasers become more efficient, and as the battery packs needed to power them become more dense and powerful, we’ll continue to see the miniaturisation and deployment of increasingly powerful laser weaponry.

Artificially intelligent “fire and forget” cruise missiles, quantum internet and  quantum radar, silent submarine engines, 20,000 ton submerging warships, supersonic submarines and ways to send information without actually sending information. Yep, it could be said that in the future the Chinese military will have lots of new toys to play with. But as China sets out to develop and deploy all these fancy new toys something’s missing… laser weapons. This week though the Chinese government plugged that gap and in another example of how they’re trying to pull ahead of other nation states, like the US and Europe, they unveiled their new “laser AK-47.” A laser rifle that looks like something straight out of a sci-fi movie that can zap a target from nearly a kilometre away and burn, or “carbonise” in the scientists lingo, clothing and skin, according to researchers involved in the project.

The ZKZM-500 laser assault rifle is classified as being a non-lethal weapon, like this laser that makes sound that was recently developed by the US military, for now at least because of its low power, and produces an energy beam that can’t be seen by the naked eye but that can pass through windows and cause the “instant carbonisation” of human skin and tissues.

Ten years ago its capabilities would have been the preserve of sci-fi films, but one laser weapons scientist said the new device is able to “burn through clothes in a split second, and if the fabric is flammable “the whole person will be set on fire”.

“The pain will be beyond endurance,” according to the researcher who had took part in the development and field testing of a prototype at the Xian Institute of Optics and Precision Mechanics at the Chinese Academy of Sciences in Shaanxi province. 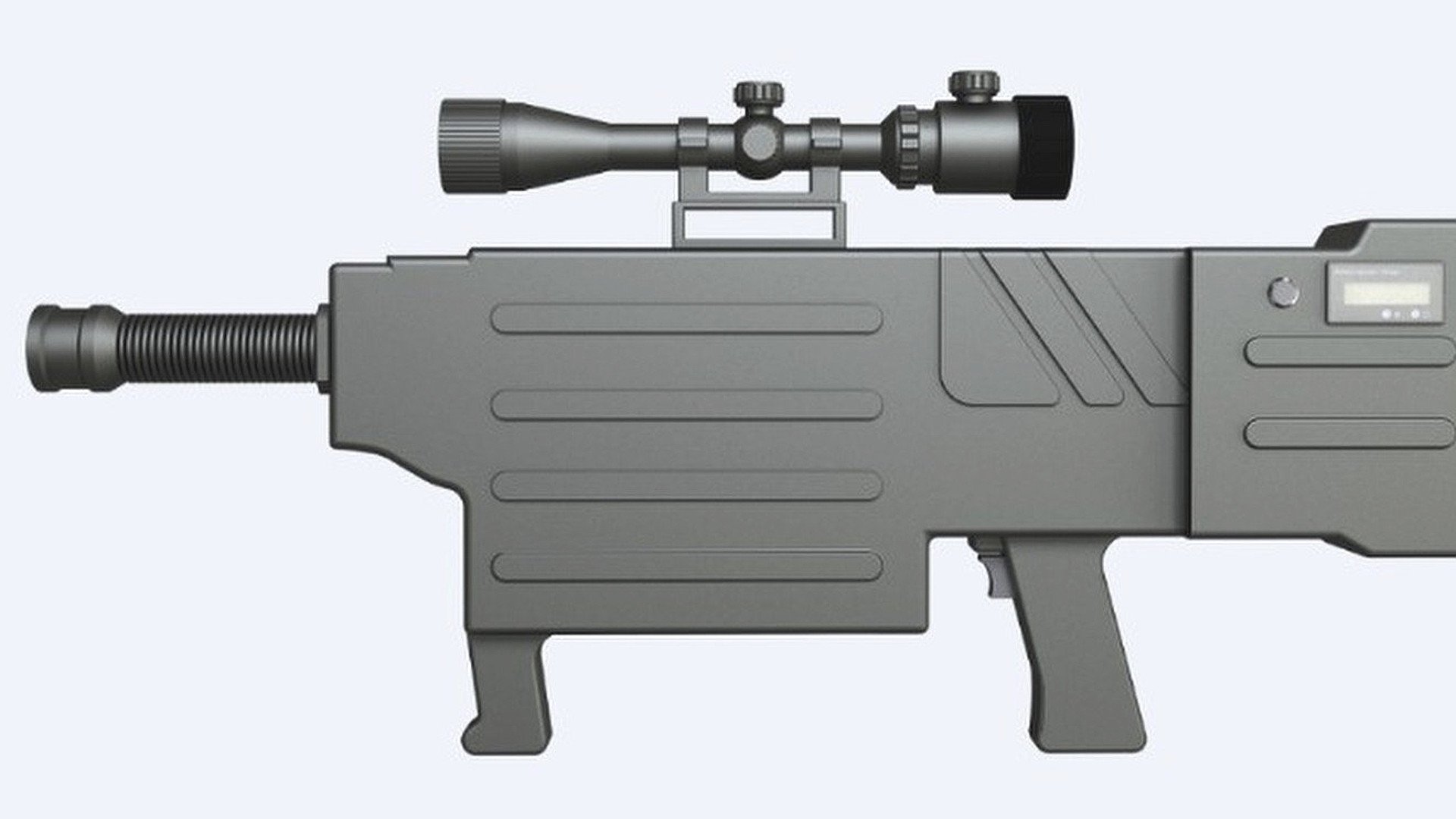 The ZKZM-500, one day this will be smaller and more powerful

The 15mm calibre weapon weighs three kilos (6.6lb), about the same as an AK-47, and has a range of 800 metres, or half a mile, and could be mounted on cars, boats and planes, and according to the reports it is now ready for mass production with the first units are likely to be given to anti-terrorism squads in the Chinese Armed Police.

In the event of a hostage situation it could be used to fire through windows at targets and temporarily disable the kidnappers while other units move in to rescue their captives.

It could also be used in covert military operations. The beam is powerful enough to burn through a gas tank and ignite the fuel storage facility in a military airport.

Because the laser has been tuned to an invisible frequency, and it also produces absolutely no sound, “nobody will know where the attack came from. It will look like an accident,” another researcher said. The scientists requested not to be named due to the sensitivity of the project.

The rifles will be powered by a rechargeable lithium battery pack similar to those found in smartphones, which one day could be replaced by more powerful and reliable solid state batteries and other alternatives. It can fire more than 1,000 “shots”, each lasting no more than two seconds.

The prototype was built by ZKZM Laser, a technology company owned by the institute in Xian. A company representative confirmed that the firm is now seeking a partner that has a weapons production licence or a partner in the security or defence industry to start large-scale production at a cost of 100,000 yuan, or $15,000, a unit.

Given their potential for misuse, the design and production of the devices will be tightly monitored and for now the only customers will be China’s military and police.

A technical document containing basic information about the weapon was released last month on the Public Service Platform for National Civil-Military Integration, a website run by the central government to facilitate collaboration between the military and commercial sectors, that, as I reported a while ago, is looking to become China’s answer to the US Department of Defense’s bleeding edge research arm DARPA.

READ
Is this the first recorded incident of Robo-Suicide?

In 2009 a US attempt to design a handheld laser gun resulted in something that “only works on nudists” because its beam was too weak to even penetrate a shirt. But in 2015 Beijing upped the ante with a two billion-yuan fund to develop compact, powerful laser devices – an unprecedented budget for the field and one that triggered concerns in the US and other Western nations.

In recent years US forces operating in strategically important areas such as the Indian Ocean and the South China Sea have complained that they have been subjected to an increasing number of laser attacks from Chinese military bases or vessels that look like fishing boats.

Last month, the US government lodged a formal complaint that a “weapons-grade” laser device fired from a Chinese naval base in Djibouti had left two military pilots with minor eye injuries.

Wang Zhimin, associate researcher at the Research Centre for Laser Physics and Technology at the Chinese Academy of Sciences in Beijing, said technological improvements in recent years meant scientists were able to develop smaller and more powerful devices in the same way that mobile phone manufacturers had done.

“This is no longer science fiction. They are already a fact of life,” he said.

In the early days, due to technical limits, it was necessary to fire several beams and get them to converge on a target to cause any damage. They also needed a precise distance reading to have any chance of working.

Furthermore, the only devices available were slow, bulky and heavy, had a short range and required enormous supplies of power.

But the latest devices fire a single beam and can cause as much damage as large, truck-mounted laser cannons would have done.

But these developments increase the risk that the weapons could more easily fall into the hands of criminals and terrorists who could exploit their destructive capacity, for instance by conducting arson attacks without being detected.

Wang, who was not involved in the Xian project, warned that allowing these weapons to proliferate could be a threat to all countries and that at the moment there are no specific international protocols in place to regulate the development or use of this type of laser weapon – another case of technology advancing faster than regulators and oversight committees can keep up? Well, that’s a first.

The United Nations Protocol on Blinding Laser Weapons, initiated in 1980 and signed by over 100 nations, concentrates on earlier generation weapons and prohibits the use of those that could cause permanent loss of eyesight.

The document on Chinese government website classifies the ZKZM-500 as a “non-lethal weapon”, meaning they are deemed less likely to kill a living target than something explicitly designed to do so, such as a gun.

The lasers cannot kill a target with a single shot, but if fired at a person for long enough the weapons would start to burn a hole in their body, cutting through them like a surgical knife.

Researchers stress that scientists in this field generally agree it would be inhumane to use more powerful weapons that could “carbonise” a living person. Instead the document lays stress on the non-lethal applications of the technology. For instance it says law enforcement could counter “illegal protests” by setting fire to banners from a long distance.

It also says protest leaders could be targeted by setting fire to their clothing or hair which, the document says, would mean they lose “the rhythms of their speech and powers of persuasion”. But one Beijing police officer said he would prefer to stick to more traditional crowd-control methods such as tear gas, rubber bullets or electrical stun guns, such as tasers.

“The laser burn will leave a permanent scar,” he said. He said it would be a “horrid sight” that risked causing panic or transforming a peaceful protest into a riot.

WHY THIS MATTERS IN BRIEF The future of air combat will increasingly fought by autonomous systems, not human pilots, and the race to create those…

WHY THIS MATTERS IN BRIEF Surgery shouldn’t always be the only option when it comes to helping treat internal injuries, so now there’s a robot…

WHY THIS MATTERS IN BRIEF There’s no doubt that China’s AI in education initiative will bring a wide range of benefits and improve educational outcomes,…

WHY THIS MATTERS IN BRIEF Travelling at light speeds, or “Warp,” is standard fare for every sci-fi film, but now, even though there are significant…

WHY THIS MATTERS IN BRIEF You might think that seeing around corners is impossible, but if you can capture photons and apply a bit of…