Many of us focus on the implications of a single technology, such as 5G, AI or Blockchain, among others, but it’s how we innovate on top of them and combine them all that changes our world.

The story of the United States is one that is inextricably intertwined with technology, from the railroads that connected the nation’s first settlements to the telegraph lines that connected early cities. But, as generations have come and gone, the sheer transformative power and impact of those early technologies that helped change the continent seemingly faded away, consigned to the history books and museums as relics of another time.

However, those technologies are not truly gone. The descendants of those original technologies have become just as, if not even more, impactful, and today they are transforming the nation and its society all over again.The telegraph, for example, was replaced by faster fixed-line telephone systems, which was in time usurped by more mobile communications technologies. First came 1G, then 2G, 3G, and 4G, and now, arguably just a scant six generations from the original telegraph system that connected people using clicks and whirs, the world lives online, embracing a new type of clicks, and communicating and experiencing life in bits and bytes – something that would have been inconceivable to our pioneering ancestors. In this world, science fiction is increasingly difficult to distinguish from science fact.

The power of exponential [technology] combinations is limitless.

The changes that society and our forbearers have witnessed over the centuries aren’t thanks to the development of just one solitary technology but are instead the result of many technologies, all working in unison with one another. And this is why, as a result, the transformative power of what people commonly refer to today as “exponential technologies,” so called because the capabilities and performance develop at an exponential rate, is increasingly being usurped by the idea of “exponential combinations,” the demonstrable idea that technologies, exponential or not, are better and more impactful when they’re combined.

“The changes that society and our forbearers have witnessed over the centuries aren’t thanks to the development of just one solitary technology but are instead the result of many technologies, all working in unison with one another.”

Matthew Griffin, CEO of the 311 Institute

Even the most powerful technologies, like 3D and 4D printing, Artificial Intelligence (AI), bio-printing, blockchain, gene editing, and machine vision start life as a blank slate, waiting for the world’s enthusiastic entrepreneurs and innovators to prod, shape, and fuse them with other technologies to create something new and incredible that changes the world for the better. The combinations of the hundreds of exponential technologies that are here and emerging and the potential of those combinations to transform every part of our society—from the way we live our lives and how long we live, to where and how we work are literally limitless.

Visionaries and innovation communities that were once constrained by geography and technology now have access to a global brain and global resources that help even the most modest among us make a difference on a stage and at a scale that our grandparents could never have imagined. This new world fuels creativity, expertise, and technology that is increasingly democratized, digitized, and accessible to anyone with a connection and a smartphone, greatly accelerating the pace of innovation and the rate of change.

With the arrival of 5G, that rate is about to speed up again, enabling people to connect more seamlessly and in even more powerful ways.Imagine the technologies of today combining on this new platform to enable everything from playing games holographically or telepathically with other people around the world in real time using augmented reality (AR) and brain machine interfaces (BMI). Imagine a surgeon performing remote robotic surgeries on patients hundreds of miles away.

Imagine attending gigs and experiencing live streams from the rovers on the Moon in hi-def virtual reality (VR). Or what about being planted into the middle of the baseball game as a virtual player and feeling every participation courtesy of haptics and real-time rendering engines, facing off against world-class pitchers to test your skills while the real game streams online.

Whether it’s harnessing the power of new networks and AI to provide access to healthcare to the hundreds of millions of people who today are without it by combining the cameras and sensors on smartphones to detect cancer, diabetes, mental illness and more, or using the latest smartphones with the latest neural network chipsets to empower creativity at the edge of the network, we’re just getting started.

Authored by Matthew Griffin, Futurist on behalf of T-Mobile. Matthew Griffin is the founder and CEO of the 311 Institute, an award-winning futurist, and author of “Codex of the Future.”

You can get a copy of the article below: 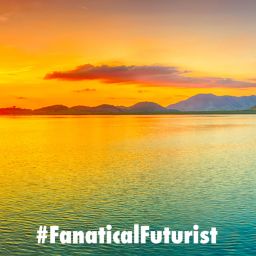 WHY THIS MATTERS IN BRIEF The ability to heal wounds faster is something that everyone should appreciate.   Interested in the future and want to…

WHY THIS MATTERS IN BRIEF One of life’s mysteries is why life exists in the first place, and the mystery of consciousness comes a close…

WHY THIS MATTERS IN BRIEF Up until recently it hasn’t been possible to directly compare the performance of two or more quantum computing systems, but…

WHY THIS MATTERS IN BRIEF NFT’s that allow people to sell any type of digital asset, from a tweet to a digital piece of artwork,…

Robots learning from other robots will ultimately mean robots will learn new skills faster, accelerating the robot revolution The robots of the world are uniting –…

WHY THIS MATTERS IN BRIEF Future screen resolutions will pack so many “invisible” pixels into the screens that they will have a natural 3D effect….

WHY THIS MATTERS IN BRIEF Future electric vehicles will be wirelessly charged, and this is the technology that will help underpin.   Interested in the…