People’s concept of what a computer is is based on their experience of traditional silicon based computers, but biological systems are simply just another form of advanced computer.

Forget the hit movie “The Social Network” and now think “The Human Network.” Then read this article, sprinkle in the news that Mark Zuckerberg wants to turn Facebook into the world’s first telepathic network and all of a sudden this article makes those sci-fi movies you watch seem tame. You’re most welcome …

Recently I discussed a breakthrough in Brain Machine Interfaces (BMI) that would one day turn humans into organic computing nodes that could be connected together via Hive Mind networks, or connected to one another via Artificial Intelligence (AI) – which itself could one day be made from DNA like this example – in the cloud using neural interfaces like Elon Musk’s Neuralink that he showed off in a connected pig recently. I also wrote about the world’s first artificial-biological electronic circuit that for the first time ever fuses biological and artificial electronic systems together into one new hybrid system.

Over the past few years the idea of creating biological and DNA computing platforms has been gathering pace with multiple breakthroughs. So too has the idea of integrating together computer networks and biological systems, like the human mind and body, and this week two teams of researchers in the US shared information about their latest projects where they’ve been exploring how biological cells might one day become networked together, and how traditional electronics could be directly integrated with human tissue.

The first presentation, conducted by a team at the University of Maryland, focused on communications networks that mimic electronic networks but are derived from biological cells. Meanwhile the second study, led out of University of Delaware, discussed the idea of interfacing hardware and human tissue.

Researchers at the University of Maryland are exploring the idea that biologically-based communication networks could control cells in the body and ultimately work to diagnose and treat medical conditions.

“We want to expand electronic information processing to include biology,” said William Bentley, principal investigator at the University of Maryland, in a press release. “Our goal is to incorporate biological cells in the computational decision-making process.”

The group’s proposal involves getting electrons to move around in cells, an operation called Redox Mediating. The cells would generate a current that creates a signal for communicating. Those currents could potentially provide communications as well as run electronics.

According to the release: “The new technology Bentley’s team developed relies on redox mediators, which move electrons around cells. These small molecules carry out cellular activities by accepting or giving up electrons through reduction or oxidation reactions. Because they can also exchange electrons with electrodes, thereby producing a current, redox mediators can bridge the gap between hardware and living tissue.”

The team describes the idea of cellular feedback that could operate electronics. Potential applications might include a wearable device that could diagnose and treat a bacterial infection, for example, or a capsule that a person could swallow to track blood sugar and make insulin.

In ongoing work, the team is developing interfaces that could enable this sort of information exchange to occur.

The team from University of Delaware focused its presentation on the merger of humans and AI through a kind of cyborg technology. The term cyborg, popular in science fiction, is a portmanteau of the words cybernetic and organism and basically describes an organic, bio-mechatronical (electrical mechanical) fictional being – but perhaps not fictional for much longer.

Researchers are taking steps toward better integrating electronics with the body, according to the ACS release. The idea would be to more seamlessly connect electronics directly to human tissues. That’s different from having electronics merely implanted, as happens now with a pacemaker that uses wires to connect to the heart, for example.

One problem to overcome is that traditional implanted devices are subject to impedance or resistance. For example, the data that one wants to collect can get blocked because of scarring caused by the process of implanting microelectronic materials like gold and silicon. That scarring interrupts the electrical signals that must flow in order for applications in muscle or brain tissue, for example, to operate properly – although new bio-compatible transistors and materials would quickly solve that issue.

That’s where this work is focused – a seamless electronic transition from Organic-to-Electronic-to-Mechanical system – the cyborg, in other words.

“We got the idea for this project because we were trying to interface rigid, inorganic microelectrodes with the brain, but brains are made out of organic, salty, live materials,” said David Martin, Ph.D., who led the study, in a statement. “It wasn’t working well, so we thought there must be a better way.”

Coatings for the electronic components are the key to interfacing hardware and human tissue, the researchers believe. They tested organic electronic materials and found one that lowered impedance, thus improving energy and communications efficiency.

“We started looking at organic electronic materials like conjugated polymers that were being used in non-biological devices,” Martin said. “We found a chemically stable example that was sold commercially as an antistatic coating for electronic displays.”

The group believes this transition between organic tissue and machine could also revolutionise organ implants. One angle they’ve been working on is creating polymers with neurotransmitters built onto them that could be implanted for “brain diagnostics.”

“These biological-synthetic hybrid materials might someday be useful in merging artificial intelligence with the human brain,” Martin said.

While this research will inevitably take time to mature it now seems inevitable that humans will one day, as I’ve been saying for a long time now, be the computing device – the only question then becomes will we be powerful beings with almost unlimited new powers, or mere drones in a network …

WHY THIS MATTERS IN BRIEF There’s a good chance that Jarvis, Mark Zuckerberg’s in house digital assistant, is more than just a quirky hobby to… 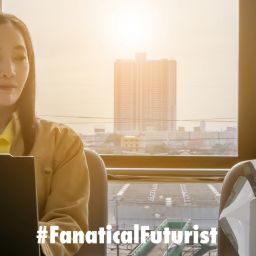 WHY THIS MATTERS IN BRIEF The Earth is bathed in energy, and reversing climate change relies on us being able to capture and use it…

WHY THIS MATTERS IN BRIEF The ability of “unethical actors” to create realistic looking video and audio of famous people to generate “Fake news!” is…

WHY THIS MATTERS IN BRIEF Studying the effects that different drugs that pregnant women take during their pregnancies on their unborn children is complex, difficult…