Being able to turn plants into electric circuits could pave the way for a whole variety of biologically inspired electronics.

A team of Swedish botanists and electrical engineers have unveiled a new method for growing and powering conductive wires inside living plants and integrating them with human electronics, power systems and even, theoretically, the power grid itself.

Imagine, for example, being able to harness the electrical energy of all of the plants in the Amazon rainforest and all of a sudden you have an interesting, albeit far fetched, new energy solution, or, more realistically imagine the plants in your hydroponics farm also being able to power the same said farm.

Led by Eleni Stavrinidou, a bioelectronic engineer at Linköping University in Linköping, Sweden the scientists used a transparent, conductive gel that cut roses could naturally soak up into their stems and leaves. After a few hours the gel hardened to form flexible wires inside the plants’ stems that could conduct electricity without damaging the plants.

“Although many attempts have been made to augment plants functions with electro-active materials their ‘circuitry’ has never been directly merged with electronics,” writes the research team who tested countless conductive materials before they came across a winner. Their aim was to get plants to soak up materials that could later harden into wires through the plants xylem, the vein like system a plant uses to transport water and nutrients. But most materials either simply wouldn’t uptake, proved toxic when it came down to the hardening phase, or would clog the xylem. In the end, the winning material was a transparent organic polymer called PEDOT, short for poly (3,4-ethylenedioxythiophene), that acts like a conductive plastic.

The research team also discovered that rose leaves when submerged in the gel could also uptake the material into a cell layer called the spongy mesophyll. After the PEDOT hardened into a conductive layer when the leaf was introduced to electric current the team could reversibly darken and lighten the leaves. While the molecular reason for this colour change is still not fully understood the scientists noted that the PEDOT infused leafs could be kept alive just as long as unaffected rose leaves.

In their paper, the scientists’ giddiness for the potential of their wired plants is clear.

“With integrated and distributed electronics in plants we can envisage a range of applications including energy harvesting from photosynthesis and as an alternative to genetic modification for plant optimization,” Stavrinidou writes. The scientists also note that one day the technology could be linked up with other plant modifications such as nanomaterials which could help enhance the photosynthesis, and ergo, the plants growing process.

Still, the scientists have their work cut out for them. While the preliminary research focuses on cut roses and separated leaves the researchers now have to devise a way to introduce their material that doesn’t involve cleaving a plant in two – and, of course, they still have to prove that the technique is safe enough if they ever want their new discovery to find its way into the food chain but that’s another story.

WHY THIS MATTERS IN BRIEF Nature is fantastic at assembling, well, everything, so scientists are trying to harness nature’s smallest “life forms” to try to… 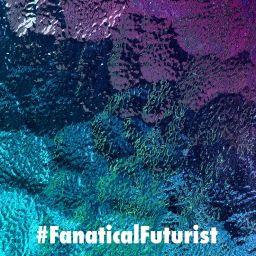 WHY THIS MATTERS IN BRIEF Air conditioning that can cool buildings without using any energy is the holy grail of aircon, and now the technology’s…

WHY THIS MATTERS IN BRIEF In many ways bacteria are nature’s factories, and with a bit of genetic tweaking they can be seconded to help…