Ultra thin and ultra flexible batteries made from Graphene could make new types of wearable computing platforms a reality.

Researchers in the UK who were motivated by the problem of how to power the growing number of wearables that are now hitting the market from companies such as Adidas and Under Armour to name but two, have found a new way to create a first of a kind flexible battery that can be printed directly on to any fabric using just a common inkjet printer, and it could open the door to a myriad of new types of flexible wearable computing devices.

While sensor laden clothing and other wearable gadgets are becoming increasingly popular, albeit at a fairly slow rate, they often still rely on bulky battery packs to power them but this new manufacturing technique, which it can be argued is a different take on piezoelectric self-charging fabrics that generate and store electricity from simple friction, will eliminate batteries once and for all and let the material itself become the power source.

Graphene, the battery of tomorrow?

Nazmul Karim, a fellow at the University of Manchester, who co-authored the research paper on the new battery technology says, “it will open up possibilities of making an environmentally friendly and cost effective smart E-textile that can store energy and monitor human activity and physiological condition at the same time.”

Generally, wearables rely on devices known as supercapacitors to give them charge that act like a battery but that can also be charged quickly to power devices in seconds, and the teams new technology is a solid state flexible supercapacitor ink, based on Graphene Oxide, that can be printed onto any fabric.

The research was published in the journal 2D Materials. In the paper the team also explain how the printed batteries have great stability because of the “excellent interaction between the ink and textile substrate,” something that’s crucial if the two are to work with each other effectively, and if the technology is pushed even further they say “the idea of a wearable computer might not be too far off.”

“The development of graphene based flexible textile supercapacitor using a simple and scalable printing technique is a significant step towards realising multifunctional next generation wearable E-textiles,” said Dr. Karim.

Graphene oxide can be produced at a relatively low cost in a printable ink-like solution that can then be applied to cotton textiles to create the supercapacitors which become part of the fabric itself.

“Textiles are some of the most flexible substrates, and for the first time, we printed a stable device that can store energy and be as flexible as cotton. The device is also washable, which makes it practical to use it to power future smart clothes. We believe this work will open the door for printing other types of devices on textile using 2D-materials inks,” added Dr. Amor Abdelkader, also co-author of the paper.

The research paper, titled, Inkjet Printing of Graphene Inks for Wearable Electronic Applications explains in its abstract that “Inkjet printing is one of the most promising techniques for the fabrication of wearable electronics due to number of advantages over conventional manufacturing techniques such as digital and additive patterning, reduction in material waste, deposition of controlled amount of materials and compatibility with various substrates.”

So who knows, perhaps we’ll be printing our own flexible batteries into our clothes in the not too distant future…

Source: The University of Manchester

WHY THIS MATTERS IN BRIEF The future of AI rests on two development tracks, the development of new software and new hardware, and both are…

Discovery paves the way for new breakthroughs in materials, molecular science, semiconductors and much more A team of scientists from Complutense University have managed to bypass… 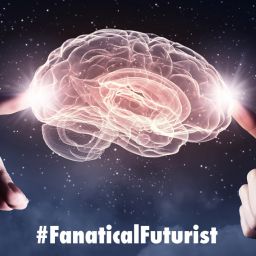 Futurist Podcast: The impact of emerging tech 2020 to 2050, Mark Metry

WHY THIS MATTERS IN BRIEF The world is changing at a faster rate now than at any other point in human history, and no part…

WHY THIS MATTERS IN BRIEF Scientists have long wondered what the smallest unit that could sustain life and replicate itself would be, and now they…

WHY THIS MATTERS IN BRIEF Putting humans into suspended animation would give surgeons more time to operate on critical patients, and help us colonise far…