As we find new ways to create new types of solar materials we can see a day when you won’t need to plug anything into an electricity grid.

The amount of electricity now being generated by renewables recently exceeded the one trillion watt mark, meaning that we only have “another” five trillion watts of energy generation to convert to renewables before the world runs on green energy – which also happens to be the cheapest form of energy now in over 58 countries. But all that said we’re still a good way from realising the full potential of solar power especially with most solar panels only converting between 17 and 27 percent of light into useable electricity – even though now we have solar panels with a top range of between 50 and 80 percent efficiency, and solar panels that work in cloudy conditions, in the rain and snow, and even at night.

So, as you can see it’s all happening, and now a new announcement raises the bar even further and pushes us closer to realising high quality transparent “solar skins” that could be sprayed onto the surfaces of everything from electric aircraft and electric cars, to smart windows.

Learn more about the innovation

Tiny, semiconducting dots small enough to leverage the weirdness of quantum mechanics hold a lot of potential when it comes to solar power. These flexible, inexpensive quantum dots serving as photovoltaic material in place of the traditional silicon promise many benefits, but the efficiency at which they convert sunlight into energy is not yet one of them. And now scientists working on this problem have made a major breakthrough in yet another area of solar power, smashing the previous world record for efficiency by close to 25 percent and bringing the idea of flexible, see through solar cells one step closer.

With an ability to be fashioned into thin, lightweight and flexible films that generate electricity from the sun, quantum dot solar cells have become a real point of focus for scientists working in the area. They have, however, lagged well behind the performance of standard solar cells on the market that top out at around 20 percent, but step by step, scientists are closing that gap.

The previous record for conversion efficiency of quantum dot solar cells was 13.4 percent, achieved by the National Renewable Energy Laboratory (NREL) in the US. Now, scientists at the University of Queensland in Australia have now taken a significant leap forward, achieving a new world record of 16.6 percent efficiency, which was verified through independent testing.

READ
LA will switch to battery power, in 2021

“The near 25 percent improvement in efficiency we have achieved over the previous world record is important,” says Professor Lianzhou Wang, who led the research. “It is effectively the difference between quantum dot solar cell technology being an exciting ‘prospect’ and being commercially viable.”

According to the team, the surface of other quantum dots can be quite rough and unstable, which hinders their efficiency. They overcame this with a new manufacturing technique that gives their new class of quantum dots new properties to overcome these flaws, and gives the electrons a far easier ride.

“We developed a new surface engineering method, by deliberately controlling the surface functional chemicals on quantum dots, which not only stabilize the quantum dots but also maintain a smooth pathway for the electrons to go through (current flow),” says Wang.

According to Wang and the team, these levels of efficiency open some exciting possibilities. Because these quantum dots are flexible and can be printed out on large scales in a cost-efficient manner, with further work they could take the form of transparent skins that can be layered over the skin of electric planes, cars and homes to generate electricity. They will now continue working on the technology with these, and other, goals in mind.

“In the future, we will further improve the quantum dot solar cell efficiencies, scale up the printing technology of the solar cells on flexible and transparent substrates for potential uses in building windows, wearable electronics, and expand the applications of the quantum dots to other fields including LEDs,” Wang tells us.

The research was published in the journal Nature Energy, while you can hear from Wang in the video below.

WHY THIS MATTERS IN BRIEF Carbon fiber’s light weight and superior strength make it idea for many applications, but up until now it’s been expensive… 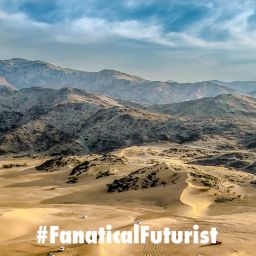