Getting food into orbit is expensive, and most of the food is dubious anyway, but 3D printing and new technologies are giving us entirely new ways to produce food anywhere and anytime.

Most people like eating meat but the ecological impacts of raising livestock to feed seven billion humans isn’t insignificant, which is just one of the reasons why we’re seeing the rise of so called clean meat alternatives – meats that include everything from beef, chicken, duck, salmon and even tuna, that are all grown without the animals either using stem cells cultured in bioreactors. So far though all of these clean meats, which China recently bought $300m worth of from Israel, and that the US FDA recently approved for sale to US consumers, are grown on Earth. But what about meat loving astronauts? Now, for the first time, the company that bought you lab grown fillet steak have just announced they’ve made synthetic meat in space aboard the International Space Station (ISS), but instead of growing it in a bioreactor they 3D printed it using a 3D Bio-Printer – the same kind that’s being used to 3D print human organs, from brains to skin  for use in human transplants.

In order to achieve their breakthrough Israeli startup Aleph Farms partnered with several 3D printing companies to conduct their experiment, and the company says this is the first time anyone has produced clean meat in space. Ironically though it’s not the first “meat” produced in space after another company, Techshot, managed to 3D print human heart tissue on the ISS a couple of years ago. Yes, this story just keeps getting weirder – welcome to the future.

Aleph Farms’ process for producing artificial beef, and by artificial I mean real beef grown in the same way it grows in a cow, except those processes were replicated outside of the cow, relies on mimicking the natural muscle-tissue regeneration process in our bovine herds. And if you’ve ever eaten a bad steak you know it’s not just the animal cells that matter — it’s also the way they’re organised and the texture of the meat that matters.

Aleph Farms says its current process results in a more realistic piece of slaughter-free clean meat, but nevertheless so far getting that meaty texture right has been a challenge for most lab grown meat companies so doing experiments in space could help inform how we recreate the real texture of meat here on Earth.

The experiment took place in the Russian lab on the ISS using a printer developed by Russian based 3D Bioprinting Solutions, and in order to create the beef the animal cells were mixed with growth factors to create the so called “Bio-ink” for the printer.

The printer then laid down layer after layer of cells, which grow into a small piece of muscle tissue. The company says bio-printing meat in space has the potential to be much faster than it is on Earth, and without gravity the beef cells can grow in all directions without the need for any support structure, whereas on Earth, you need a lattice or scaffold to help them grow in the right ways and can only print from one side at a time.

While we’re still some way from making 3D printed meat financially viable on Earth, even though the costs have dropped from over $1,000,000 per pound to just $363 today and just $60 in the near future thanks to new processes, the costs of space travel and transporting goods, like food, into orbit are astronomical so it might actually make sense for astronauts on extended missions to produce some of their meat in 3D printers rather than having everything pre-packaged.

All that said though and as amazing as the breakthrough is Aleph Farms still say they’re committed to expanding their beef printing techniques here on Earth, which in time will give us a new problem to solve – when we can grow steak on demand what do we do with all those cows and all that land?

WHY THIS MATTERS IN BRIEF Being able to move objects with light has been science fiction for a long time, but scientists in New York…

WHY THIS MATTERS IN BRIEF Tumble dryers account for more than 4 percent of the world’s energy consumption, so cutting that figure by 70 percent… 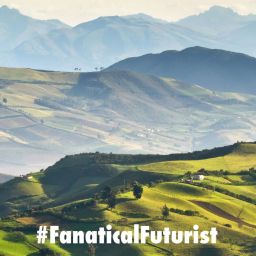 WHY THIS MATTERS IN BRIEF Houses used to be expensive and time consuming to build, those days are fast disappearing.   Following on swiftly from…

In a world first scientists have helped a paralyzed man experience the sense of touch in his mind-controlled robotic arm The cutting edge experiment, a collaboration…

WHY THIS MATTERS IN BRIEF Today plastics are made from harmful fossil fuels, but this new process eliminates them from the manufacturing process.   Interested…