Range anxiety, the worry that your electric vehicle will run out of charge and leave you stranded, is a real thing, this could help solve that.

As electric vehicles become more popular most buyers still have to confront the issue of range anxiety – the anxiety about their vehicles running out of juice with no charging station in sight. Today, as a consequence a range of companies, from Tesla to Volkswagen, are building more efficient longer lasting batteries, building out national supercharger networks, and even designing autonomous EV charging robots that patrol areas and find your car before plugging themselves in.

Over the longer term though we need other solutions and those too are coming, in the form of batteryless EV’s, solar powered EV’s, and EV’s that can be charged from a distance using wireless conductive charging just like you find in some smartphones. While that latter technology still has some way to go before it’s market ready in the meantime researchers are proposing a new “interim” step to charge your EV while it’s in motion.

Imagine a future where your EV was getting low on charge ­on a highway road trip – so you deploy a telescoping charging cable to another EV, just in the same way fighter jets re-fuel in mid flight, and borrow a few kilowatt-hours and then your car pays for that charge automatically using cryptocurrency. An engineering professor at the University of Central Florida believes it’s not far-fetched.

We’ve seen a host of mobile EV charging van concepts. And there are proposed solutions for stationary robots to connect a vehicle to a charger, like what Kuka Robotics demonstrated last year like the one shown below.

READ
Scientists use WiFi to read your emotions

The latest idea is to merge the two so EVs on the move can connect with one another and with mobile charging stations. 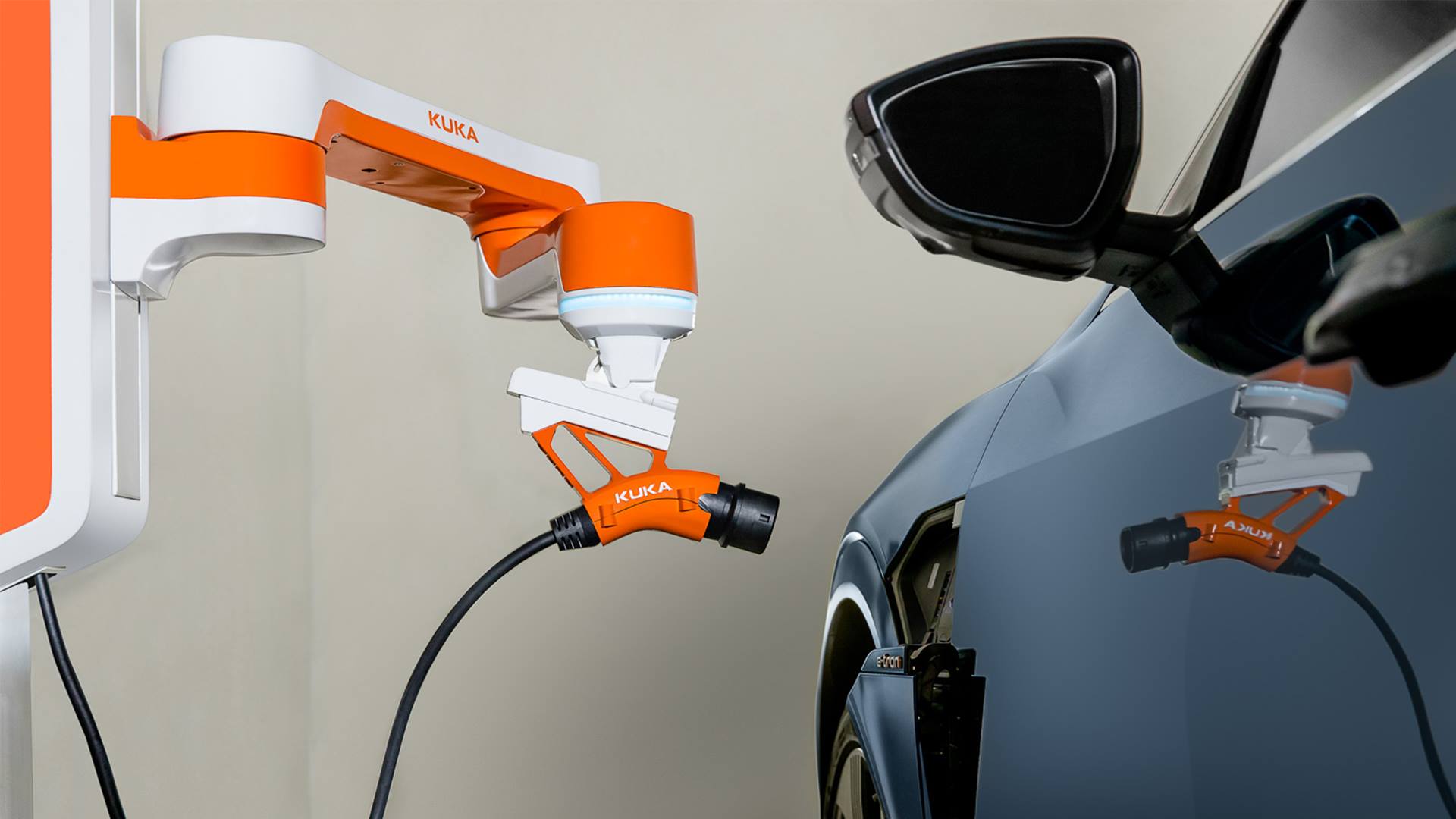 A few weeks ago, Swarup Bhunia and his colleagues at UoF’s electrical and computer engineering department posted a paper explaining how it would work. Here’s part of the Abstract:

“We propose Peer-to-Peer Car Charging (P2C2), a highly scalable novel technique for charging EVs on the go with minimal cost overhead. We allow EVs to share charge among each other based on the instructions from a cloud-based control system,” their paper says, “The control system assigns and guides EVs for charge sharing. We also introduce Mobile Charging Stations (MoCS), which are high battery capacity vehicles that are used to replenish the overall charge in the vehicle networks. We have implemented P2C2 and integrated it with the traffic simulator, SUMO. We observe promising results with up to 65% reduction in the number of EV halts with up to 24.4% reduction in required battery capacity without any extra halts.”

In other words, two EVs link up to one another with telescopic charging booms. By creating a network of electric vehicles sharing energy, the researchers believe drivers would have to stop a third as often. Here’s how the connector could work:

“We envision a safe, insulated, and firm telescopic arm carrying the charging cable. After two EVs lock speed and are in range for charge sharing, they will extend their charging arms. The arms heads will contain the charging ports, and they will latch together using either magnetic pads or other means. The arms and the overall charging operation will be coordinated by the respective arm controllers of each EV. This is just one possible realization of the charge transfer mechanism.”

An example of how the new system would work

That could allow automakers to produce EVs with smaller packs. But it would require a redesign of battery systems, in which there would be a separate battery used for the exchange of energy on the fly.

Professor Bhunia describes the Mobile Charging Stations as “high battery capacity vehicles that are used to replenish the overall charge in the vehicle networks.” The MoCS would augment the capacity of P2P charging when it might be difficult to borrow juice from a fellow EV driver. The paper’s illustration shows that mobile charging stations might utilize drones.

Of course, there’s the problem of safety making those connections. You would need high levels of connected autonomy like used by jets sharing fuel ­– as well as robotic charging arms like the concept recently unveiled by Volkswagen I mentioned earlier. There would also need to be a central transaction management system, possibly based on Blockchain, for credits by the dollar or kilowatt-hour, but as the EV industry continues to take off solutions like these are going to be vital in helping build consumer confidence and eliminate range anxiety until some of the new solutions I mentioned earlier start being commercialised.

Film making and game making collide, behind the scenes of Disney’s “The Mandalorian”

WHY THIS MATTERS IN BRIEF In the past you would need a rocket to get into space, but today there are more planes taking on…