Coral reefs take millennia to mature and only years to destroy, now technology is coming to their rescue.

Even if you’re not particularly interested in marine biology, you’ve likely at least heard of Jacques Cousteau. The French oceanographer, explorer and conservationist not only made modern Scuba diving possible, but he was responsible for raising global awareness of the humanity’s effects on underwater ecosystems, thus contributing to the conservation of innumerable species.

Now his grandson Fabien Cousteau is following in his grandfathers footsteps, founding a new organization for marine education and conservation – the Fabien Cousteau Ocean Learning Center (FCOLC) and one of its first projects involves an ambitious, and creative use of 3D printing to bring coral reefs back from the brink.

Thanks to global warming, pollution, the rise of invasive species and damage caused by cruise ships, dredging and other human activities coral reefs aren’t faring so well these days with Australia earlier this year announcing that over 30% of the Queensland Great Barrier Reef had suffered the worst bleaching event in it’s history.

These delicate and beautiful coral reefs ecosystems are far more important than many people realise. In addition to supporting tens of thousands of species found nowhere else on Earth, and being home to the the planets most diverse and dense ecosystems – even more dense than the rainforests, reefs act as a buffer between shorelines and power of the sea, generate trillions of dollars in fishing and tourism revenue, and hold potential cures for diseases like cancer and HIV.

As a consequence their disappearance is a threat to all of us and to future generations.

So what’s to be done?

Over the years scientists have put forward several possible solutions – from seeding the reefs with new, hardy, genetically modified corals to unleashing AI robo-hunters to kill invasive species but Fabien and the FCOLC believe that by far the fastest way to help the reefs recover is to turn to 3D printing. And they’ve turned to Reef Design Labs to help them make their idea a reality.

3D printed coral reefs may be synthetic, but their similarity to natural reefs, in texture, appearance, and even chemical makeup is designed to attract baby coral polyps, which float around the sea looking for surfaces to attach themselves to and start multiplying to, eventually, form the spectacular reef systems that we see today. In turn it’s hoped that these new reef communities will attract rare fish and invertebrate species and ultimately help rebuild the diverse reef ecosystems that have been under threat for so long.

The first 3D printed reef in an ocean was implanted in 2012, off the coast of Bahrain and the new project centers around the Caribbean where FCOLC has partnered with the Harbour Village Beach Club, located on the Caribbean island of Bonaire.

“I’ve been all over the world and Bonaire is a very special place,” said Fabien Cousteau.

“My goal is to positively influence the young people on Bonaire, engage decision makers to choose to preserve the ocean’s natural beauty and culture, and make this island an example for the world.”

The teams will begin 3D printing coral later this year and while the exact locations for the implantation of the printed reefs hasn’t yet been decided, the partners hope that the reefs will help transform the island into a wildlife refuge – not only for the coral and other creatures on the reef, but for the birds and other marine life that subsist on coral species.

“Bonaire is in a prime position to enhance reef growth because it has so many natural, healthy reefs already. Our initiative with 3D printing will hopefully rapidly assist us in revitalizing more stressed or damaged areas. 3D printed corals can generate real change and establish real growth for reefs, one of the key attractions for visitors and divers alike in Bonaire and this technology is less labor intensive than current coral restoration processes, creating a larger impact in a shorter amount of time.”

The process of printing and implanting the reefs will be documented at every step, with educational materials and even a documentary on the project being generated at some point. Not only will the 3D printed reefs improve the marine habitats around Bonaire, but they’ll also serve as an example of how technology can be used to save threatened ecosystems around the world.

“We are pleased to use advanced knowledge of prominent sea issues to make Bonaire an example for the Caribbean and other areas of the world,” said Eric Ewoldt, Executive Director of Harbour Village.

“We know 3-D printing efforts have worked in Monaco and the Gulf States among others. With the development of our Ocean Learning Center, now is the perfect time to launch this technology in Bonaire.”

WHY THIS MATTERS IN BRIEF Around the world trillions of dollars are being spent on building infrastructure, but disruption across multiple sectors is forcing a…

WHY THIS MATTERS IN BRIEF The technology we’re developing as a society is increasingly making sci-fi look tame, and we are only just beginning.  …

WHY THIS MATTERS IN BRIEF As our knowledge of materials and how they behave improves we can generate electricity from almost anything.   Scientists have…

WHY THIS MATTERS IN BRIEF Every day we’re finding new ways to power our planet, but what if the plants around us could power our…

WHY THIS MATTERS IN BRIEF Sometimes you need crazy ideas because one day those crazy ideas change the world, in this case scientists think they… 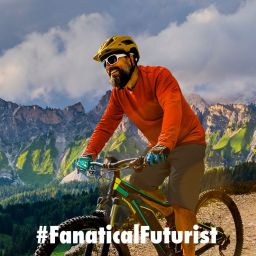