Today if you want to see how effective a drug is at killing Cancer you have to rely on human trials, but that could soon be a thing of the past.

In the past I’ve talked a lot about the development of so called “On-a-chip” technologies that, in effect, let us miniaturise a variety of things – from giant particle accelerators through to human organs and biological systems onto a small translucent lego like brick that does away with the need to test drugs on real humans, and so on, because as it says it mimics the human body on a chip. And if you’re wondering why researchers might be invested in this kind of research then it’s because once, for example, you get to the point where you have a “Human-on-a-Chip” you can dramatically accelerate drug testing, and therefore get drugs like Covid-19 vaccines, to the market faster and, as a side benefit, eliminate the need for animal testing – all win wins.

So far we’ve seen the development of everything from human blood vessels, hearts, stomachs, and placenta’s on-a-Chip, as well as other organs, and now researchers at Kyoto University in Japan have developed a new Tumor-on-a-Chip that can better mimic the environment inside the body, paving the way for in this case the improved screening of potential cancer fighting drugs. 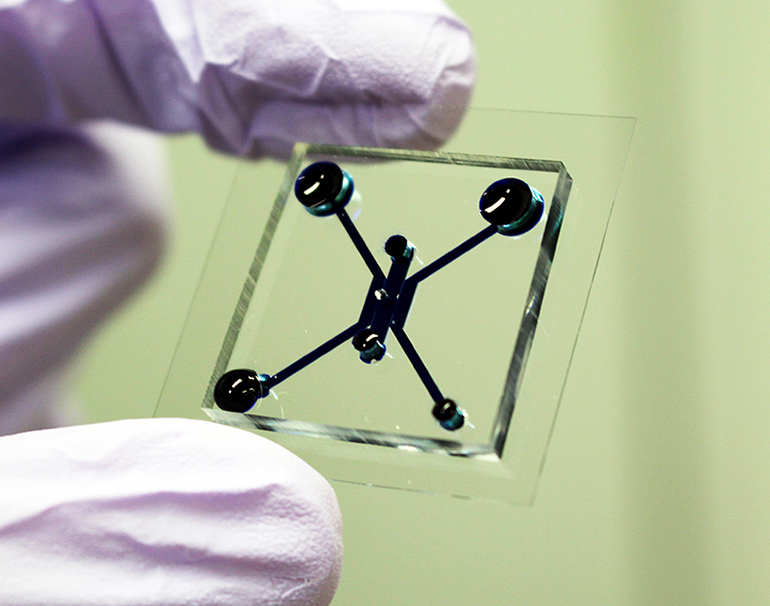 The path to drug discovery is never easy. Scientists and clinicians can go through tens of thousands of potential compounds for years to find a handful of viable candidates, only for them to fail at the clinical level.

“Potential compounds are tested using animal models and cells cultured in a dish. However, those results frequently do not transfer over to human biology,” explains first author Yuji Nashimoto formally of the Graduate School of Engineering, and now at Tohoku University. “Furthermore, cells on a dish lack the three dimensional structure and blood vessels, or vasculature, that keep it alive. So, we came up with a plan to construct a device that solves these issues.”

The device, reported in the journal Biomaterials, is the size of a coin with a 1 mm well at the center. This well is flanked by a series of 100 µm ‘microposts’. The idea is that a three-dimensional culture of tumor cells is placed in the middle well, and then cells that construct blood vessels are places along the microposts. Over a few days the vessels grow and attaches to the culture.

“This ‘perfusable vasculature’ allows us to administer nutrients and drugs into the system to mimic the environment in the body,” continues Nashimoto. “This allows us to have a clearer picture of the effectiveness of cancer treating compounds.”

This perfusion did significantly keep the tumor cells healthy by keeping cell proliferation up and cell death down. A drug assay was then performed with the team administrating an anti-tumor drug at low doses. Interestingly, the drug was more effective under static conditions compared to when nutrients were flowing through the tumor cells.

In contrast, the drug’s effects became more potent when the flow was turned on and the dosage was increased. Ryuji Yokokawa, who lead the team, explains that the unexpected results prove that we need to consider the balance between proliferation of tumor cells and the efficacy of the drug under flow conditions.

“We hypothesize that at low doses the benefit of the nutrient flow outweighs the effect of the anti-tumor drug. It proves the importance of blood flow in the vasculature when screening for drugs.”

He concludes, “Due to its size and utility, we hope the new device can expedite the tests on the countless number of potential new drugs. While many questions remain, we are happy to have developed this device and have shown that three dimensional perfused cell culture is vital for the next step in drug discovery.”

WHY THIS MATTERS IN BRIEF Technology is getting closer to the human body but we’re still culturally not ready to “merge” with it yet, so…

WHY THIS MATTERS IN BRIEF We have reached the point where we can digitise life itself, albeit at a micro scale, and that opens up…