People often think of robots as static things, with fixed forms that don’t evolve, but scientists are creating robots that can evolve to suit different situations.

Evolution is a trip. On the one hand, it’s a seemingly simple mechanism -those best fitted to their environment have more babies, while less fit individuals don’t reproduce as much, and their genes filter out of the system. But on the other hand it’s given rise to an astounding array of organisms. Some animals fly with feathered wings, others with membranes stretched between fingers. Some run on two legs, others four, and each has adapted to its environment in its own way.

Evolution is incredibly powerful, and it’s a kind of power that roboticists are now looking to for inspiration with the field, known as Evolutionary Robotics, gaining ground after researchers in Norway recently unveiled the world’s first self-evolving self-manufacturing robot. Now new proof-of-concept research from scientists in Australia has been exploring how so called “Evolutionary Algorithms” can design robot legs tailored to walk on specific surfaces, and the results are at once logical, counterintuitive, and bizarre – and could hint at a novel way for roboticists to engineer future robots.

In the latest example of robot evolution in action the researchers begin with 20 randomized digital leg shapes constrained down to a particular size – so you don’t get 10 foot long nightmare legs, and each design is based on elements called Bezier curves.

“A Bezier curve is if you’re in Microsoft Paint and you define a curve by clicking on a couple of control points, but it’s in three dimensions,” says research scientist David Howard of Australia’s Commonwealth Scientific and Industrial Research Organisation. The system projects these curves into a grid of 3D pixels, known as voxels.

“All we say is, anywhere where the curve intersects with a voxel, we’re going to put some material in that voxel,” Howard adds. “Everything else is blank.” This gives each design its unique shape.

READ
Robot sales in 2016 were the best ever

The simulation looks at the “fitness” of a given leg if it were walking on one of three surfaces – hard soil, gravel, or through water. Only instead of selecting for traits like good eyesight or camouflage, like natural selection would in nature, the system selects for how much torque a motor would have to exert if it had to power a leg shaped a particular way to walk across one of the surfaces. In other words, an energy efficient leg is a good leg, and there are bonus points for leg shapes that require less material.

“If we have a gravel surface and we walk the leg through it, we calculate the forces on the individual pieces of gravel,” says Howard. “It gives us a really high-fidelity look at what the leg is actually doing in the environment.” Same with water and the hard soil.

The researchers then take those original 20 legs and combine the best performing ones. That is, selecting the most fit, which “reproduce” to create child legs that look a bit like them, which in nature’s terms would be the next evolution of the leg.

“We just do that again and again and again,” says Howard. One hundred generations in total. The team then ended up removing the lowest performing half of the population, just like a nasty environment might cull a population of animals in nature. “And then what happens is we get this automatic [algorithmic design] adaptation to the environment.”

Take a look at the image above. At top are the legs that the evolutionary algorithm determined would most efficiently walk across hard soil. The middle row is for gravel, and the bottom for water. The blade-like legs make good sense walking across soil because the surface is hard, the slimmed-down limbs won’t sink through the terrain.

“That’s why gravel is a bit thicker, because it needs to have these wider footprints,” says Howard. That’d help the legs walk on top of gravel instead of sinking through it. Like snowshoes.

The fat legs adapted for water? They’re a bit of a mystery though.

“The water was a weird one, because we were expecting the same sort of blade-like structures as the soil,” says Howard. “That’d let them cut through the water. Plus, you’d expect the system to prefer slimmer designs, given its directives. But it didn’t. We’re still not 100 percent sure why that is.”

Also a bit odd are the projections you can see on some of the legs, especially the soil ones.

“The theory we want it to be is that they actually do serve a purpose,” says Howard. “But really, when we’re mapping the Bezier curves into the voxel grid, the bit of the curve that appears to be useless is actually a small part of a much larger curve that’s providing some structure further into the leg itself.”

The projections look metal as hell, but they’re just artefacts that probably don’t help or hinder the performance of the leg. Howard and his colleagues have tweaked the system to automatically detect and delete them. 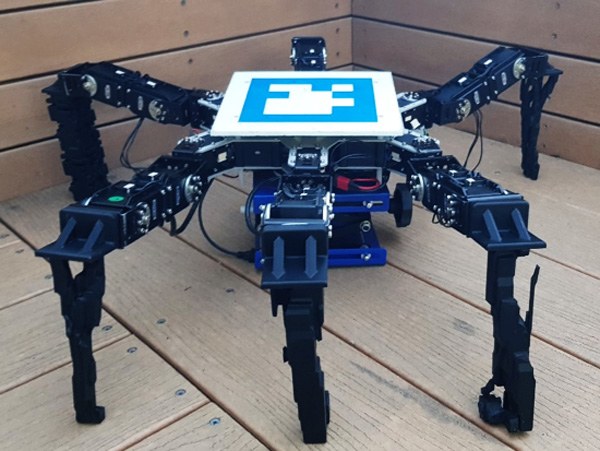 The researchers have also 3D printed these things and connected them to an insect-like hexapod robot. The plan now is to test how they perform in real terrain compared to legs designed by humans. The team loaded standard, human designed legs into the simulator and the indications came back that the evolutionarily designed legs equalled or exceeded the performance of those designed by the humans.

But why go through the trouble of simulating evolution for robots anyway? For one, these researchers can use the new technique to create a hyper-specialized robot to walk on a certain terrain, instead of relying on general purpose legs, and theoretically that would make a robot better able to tackle a particular environment like a sand dune.

“If you want to use your robot in a different environment, you can just rerun the algorithm,” says Tønnes Nygaard, who studies and creates his own line of self-evolving robots at the University of Oslo, but who wasn’t involved in this new work. “If you’re doing that in a system that you built and designed for one specific application, that might not be possible late in the process.”

Nygaard’s own system, a quadruped robot with telescoping legs, actually evolves on the fly. Through trial and error- that is, falling down a lot – it learns to walk on, say, icy ground by shrinking its legs to lower its center of gravity. Indoors, in can afford to lengthen them for longer strides and therefore more efficient locomotion. So perhaps it’s possible to combine the two techniques, to use simulation to land on a good design for a foot, then incorporate that into a real-world evolving machine.

And really, if evolution is good at making anything, it’s surprises.

“What evolution does is it searches a much wider design space,” says Howard. “It doesn’t care what the thing that it’s making looks like. It might look like something completely counterintuitive to what a human engineer would come up with. But if it works,” he says, “that’s the only thing that matters.”

It’s a matter of When, not If we solve Death and Generation Z could be the first generation to experience Immortality in their lifetimes. Today…

WHY THIS MATTERS IN BRIEF One day AI’s will be able to create photorealistic video content of anything and everything all by themselves, this is…

WHY THIS MATTERS IN BRIEF As our data volumes explode we need new ways to store it all, and DNA is a perfect solution –…