Futuristic transport like the Hyperloop, a Mach 1 train in a tube, need a futuristic power source.

The Hyperloop is a futuristic train in a vacuum tube that will one day be able to transport people and cargo at speeds of between Mach 1 and Mach 3, but for now, while the prototypes are getting faster and hitting speeds of up to 300mph on test tracks there’s still a big problem that needs to be addressed – an electric motor that’s big enough to power these futuristic vehicles as they speed across continents.

Michael Fragomeni is one of the people who are now sitting on the threshold of plugging in an electric motor design, that despite its modest dimensions, can thrust a hyperloop pod from rest to 155 mph (250 km/h) in a fraction of a second and that ultimately has the performance to propel future Hyperloops at hyper speed.

His high-density electric motor and battery pack, now under manufacture in final production form in Australia, promises to literally accelerate the work underway in the world on hyperloop development. 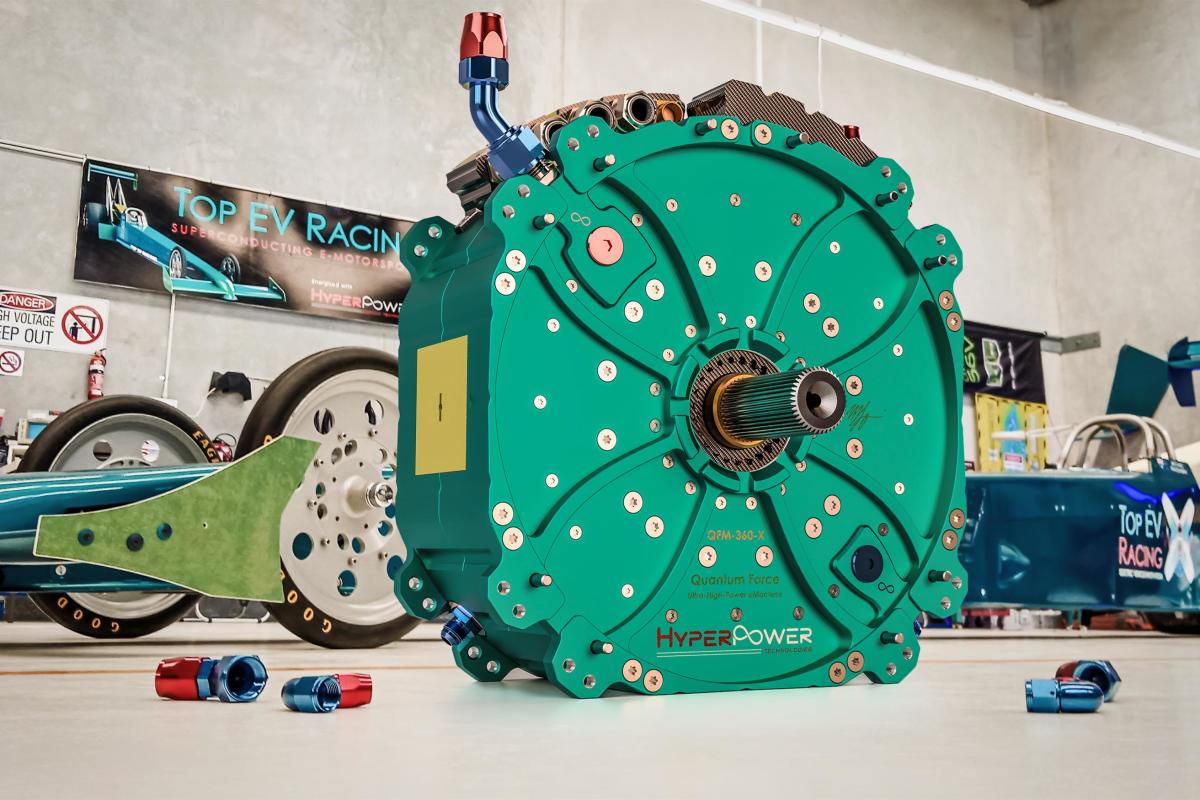 “There are companies who are dealing with us on using the motor with hyperloop projects,” says the founder and managing director of HyperPower Pty Ltd from its business headquarters in a northern Perth suburb. “There’s nothing in the world that can do what our [engine] does with the power, weight saving and energy charge rate centered around aerospace engineering and outcomes.”

Fragomeni did not name the companies though. There are three main developers of the hyperloop architecture – Virgin Hyperloop One, Hyperloop Transportation Technologies and Transpod – and also interest in the concept in Scandinavia with research group SINTEF and India with DGWHyperloop.

Asked what makes the HyperPower motor different to what’s on the market now, Mr Fragomeni says: “Energy density. It’s very, very high power for something that is quite small and light. The motor and the battery are built for maximum power density. The motor is mechanically very durable.”

Fragomeni and the innovative electric motor have previous exposure through plans to race a drag car fitted with the motor and battery pack. That car – still sitting on the floor of the business’ warehouse – is part of HyperPower’s sister company, Top EV Racing. It has a kick-arse acceleration to take on the Top Fuel cars with a claimed potential of making the standing 1,000-feet drag run in 3.7 seconds at 330 mph (530 km/h). But it’s yet to spool up in anger.

Much of the hype surrounding the business comes from the construction of this electric drag car.

“To say we had an electric race car did not open many doors for us,” he says. “Now we are HyperPower, we have a lot of interest. Things changed quite differently and as an example, Airbus came on board. The race car was useful because it showed we could have a fast turnaround: It was lightweight, reliable and strong. The technology transfer was made from the race car to our now commercial projects. Motorsport is our R&D weapon and is always parallel to what we are doing with HyperPower. The feedback from that drag racer has and will be immense. It’s not a side step but is part of the journey.”

“Data allows us to calculate motor performance, such as in the drag car,” he says. “We see potential of 0-600 km/h in about five seconds; 0-200 km/h in 0.8 seconds. That data is very useful to prove up future motors and applications.

“Drag racing is extremely punishing. The best way to test a component is to push it to destruction – that’s pretty much what drag racing does. To load it up and abuse the hell out of it. We are also concentrating on other extreme environments, such as mining. These applications need huge start-up loads – for example rail and haul trucks. Already we are having excellent discussions with companies all around the world.”

In the proposed use in hyperloops, the motor has to push the capsule – containing passengers or cargo – to speed as quickly as possible. Many proposals use magnetic levitation to lift the capsule above the tub floor, while others propose an air cushion similar to a hovercraft.

“Climate change may be something that is driving a rapid take-up of zero-emission technologies. We’ll love to see it in action out in the field.”

Amongst the challenges faced by Fragomeni and his team is the battery charging.

“Fast charging ability will be an issue with much of the electric transport vehicles in the future,” he says. “Our battery has been designed and developed to charge to 80 per cent capacity in 90 seconds. These batteries are lithium-ion but have very different cell technology to existing batteries. We have been working with a cell manufacturer for many years giving us access to that technology that we are leveraging.”

Then there are the safety protocols working with high-energy batteries. Mr Fragomeni says the two battery packs that go into the racer are equivalent to 22 kg (48.5 lb) of TNT ,“so we have to have a highly safe environment, including cooling systems and protection systems. There’s a lot of IP developed around the overall operational safety of the motor and batteries.”

The HyperPower package is designed to be developed into a hybrid with other systems, and to be able to be retrofitted.

“We only want to build a simple inventory – one type of motor, one type of battery and so on,” he says. “We want to very much specialize in what we do. As soon as you think you can build six different types of motors or batteries, it loses sight of what we do and its efficacy.”

Mining is probably the biggest market that is currently open to the company and its technology. It sees applications for the motor and battery innovations in light rail, electric mining vehicles and conveyors.

“The zero-emission issue is the focus of the mining industry,” he says. “So they are able to replace the motor in their machinery for better efficiency, higher power and instantaneous torque.”

Fragomeni says interest for the new motor has also come from truck and automobile companies, and aviation giants like Airbus.

“Auto manufacturers are very focused on replacing standard systems. So they are looking at 200kW motors (in their cars) and not a lot more,” he says. “We are in a much higher output area. However, in saying that, a European vehicle manufacturer has reached out to us. We have also had discussions in Australia for the motors and batteries to be used in truck applications. The market opportunities in trucks is huge because it suits the high-torque nature of our motor.

“A lot of doors open up to us in business, especially for a young company like ours. But you need to keep a level head and choose which ones you step through. We have had great discussions in the past year with a lot of well-meaning businesses but our focus is to develop and produce in-house, not license and mass produce a product. We’ll stay in Perth and that will give job opportunities here, with a focus on furthering trade partnerships.”

READ
BHS's recycling robot is coming to help save the planet

Fragomeni says the past 12 months has been about fine-tuning the business and IP. With that came some delays in the running of their drag car.

“There has been a necessary trade-off in getting the car to the strip,” he says. “In the past year, we have been driven by market demand. It’s been very positive and uplifting for us as a team. The business plan has never changed – it’s just evolved, bringing that commercialization readiness forward.

“We are just very pleased that now the market has come around to us.”

What doesn’t sound fun about being sealed in a tube travelling at Mach 1.0!? Just under a year ago PayPal, Solar City, SpaceX and Tesla…

WHY THIS MATTERS IN BRIEF About 1 in 100 people have Celiac disease, and this could be the cure they’re all waiting for.   Recently…

Local Motors represents a new breed of company, one that competitors would be wise to watch out for Local Motors, an Arizona based automaker that…

WHY THIS MATTERS IN BRIEF Solar energy and renewable energy give the world a pathway to green, sustainable energy production, and the solar efficiency record…