The world is energy hungry, and the lithium-Ion battery, even though it’s more popular than ever, is showing its age.

We’ve heard of AI’s made out of glass, but now a patent for a new glass battery that was originally submitted by a team back in 2017 headed up by the world famous inventor of the now ubiquitous Lithium-Ion (LiOn) battery, John Goodenough, has finally been granted, and according to the team behind it the new battery “promises to accelerate the shift away from internal combustion engines” because not only is it a lot more energy dense than its more common rival, but it could also give electric vehicles a 1,000 mile range on a 60 second charge, among other benefits. Although it will have to one day contend with EV batteries with a 16,000km range, and compete with vehicles that use hydrogen or solar power as their main power sources, as well as vehicles that are wirelessly charged and no longer need batteries.

By spiking glass with either sodium or lithium to form an electrode within the battery the researchers say it has three times the energy storage capacity of traditional LiOn batteries, and it’s neither volatile nor flammable – unlike LiOn batteries that are prone to exploding now and again.

First described in a 2017 paper published in Energy and Environmental Science by the National Laboratory of Energy and Geology in Portugal, the University of Porto, and the University of Texas, the new glass battery, if commercialised, has the potential to revolutionise the electric vehicle industry. 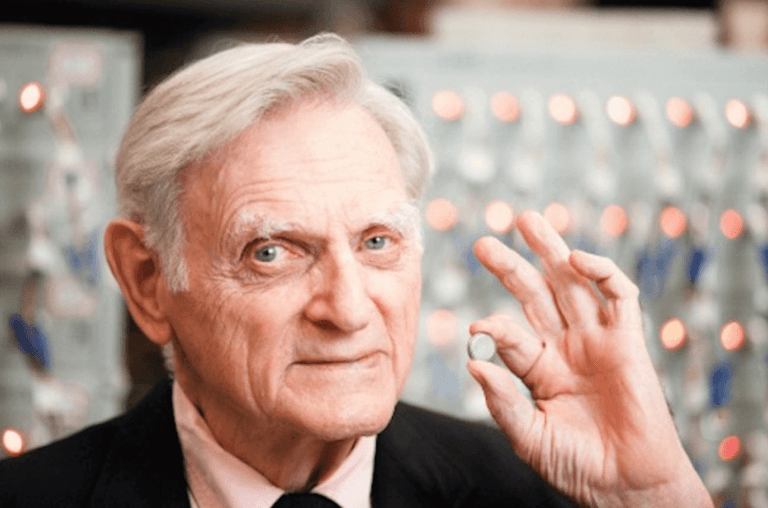 According to Goodenough, who spoke with IEEE’s Spectrum magazine about the technology when it first broke cover, this is because the glass battery could finally break through the price barrier that so far has made electric cars expensive and hindered their uptake.

“I think we have the possibility of doing what we’ve been trying to do for the last 20 years,” said Goodenough. “That is, to get an electric car that will be competitive in cost and convenience with the internal combustion engine.”

It could also be used to store intermittent solar and wind power on the electric grid, he added.

Fellow researcher Maria Helena Braga from the University of Texas, Austin says that early testing also suggests could also have “perhaps thousands” of  charge and discharge cycles, more than the average 1,000 to 2,000 cycles achievable in typical nickel-manganese-cobalt or lithium iron phosphate batteries. Additionally, the glass battery electrode has shown it can withstand a much wider range of temperatures – between -20º C and 60º C.

“Rechargeable batteries containing a water-solvated glass/amorphous solid electrolyte described herein can provide a safe, low-cost stationary battery capable of storing a large amount of electrical energy for feeding the grid or charging the battery or capacitor of an electric vehicle since the temperature range of operation of a stationary battery can be kept small through all seasons at little cost,” reads the patent.

“The small activation energy for alkali-ion transport in the electrolyte can also make feasible an electric vehicle powered by a portable rechargeable battery that operates in a wide range of ambient temperatures.”

A respected MIT battery researcher Donald Sadoway, who also spoke with Spectrum, noted: “When John Goodenough makes an announcement, I pay attention. He’s tops in the field and really a fantastic scientist. So, his pronouncements are worth listening to.”

“The issue is not can you do something at a high charge rate,” he says. “My big question is about capacity fade and service lifetime.

“If he can give us an electrolyte that is devoid of these flammable, organic solvents, that’s salutary in my opinion,” Sadoway was quoted as saying by Spectrum.

While the glass electrolyte and an anode to complement it have been identified, holding back commercialisation of the technology is confirmation of a cathode to complete the picture.

“The next step is to verify that the cathode problem is solved,” Goodenough was quoted as saying by Spectrum. “And when we do … we can scale up to large-scale cells. So far, we’ve made jelly-roll cells, and it looks like they’re working fairly well. So, I’m fairly optimistic we’ll get there.”

For Goodenough, it is not about making money off the technology – after all, he’s now 94 years old.

WHY THIS MATTERS IN BRIEF Renewable energy is the future of energy production, and as the technologies becomes more efficient, and as record amounts of…

WHY THIS MATTERS IN BRIEF Building the world’s first commercial quantum computer will require international collaboration, and a plan, and it looks like we now…

WHY THIS MATTERS IN BRIEF The level of regulation is already a major burden on companies, a robo-regulator could automate compliance, lighten the load, reduce…

WHY THIS MATTERS IN BRIEF Predicting the future, let alone the deep future, is very difficult but that doesn’t stop people from trying, so sit…