One day we will be able to 3d print human hearts and organs with embedded electronics that can monitor them and fix them when things go wrong.

As researchers around the world find new ways to 3D print and manufacture replacement human organs on demand that range from bone, brain tissue, corneas, and kidneys, all the way through to human hearts and skin, one of the things I’ve been keeping an eye on as a futurist is the point in time when we can embed these artificial organs with 3D printed electronics, including compute and sensors, and create cyborg-like human-hybrid organs that could monitor their own performance and then take corrective action when something goes wrong. A simple example would be a heart embedded with sensors and even 3D printed film batteries and bio-batteries that knows when it’s going to fail then shocks itself to keep the individual alive.

Now by using a 3D printer scientists in the US have gotten somewhat closer to that futuristic vision after they 3D printed an elastic membrane that can be slipped over the outer layer of a heart’s wall.

The new membrane, which was described in the journal Nature Communications, contains tiny sensors that can track the heart’s temperature, pH and level of strain, and the researchers say that one day it could be used to treat patients with rhythm disorders in the lower chambers of the heart, as well as the rhythm disorder atrial fibrillation. 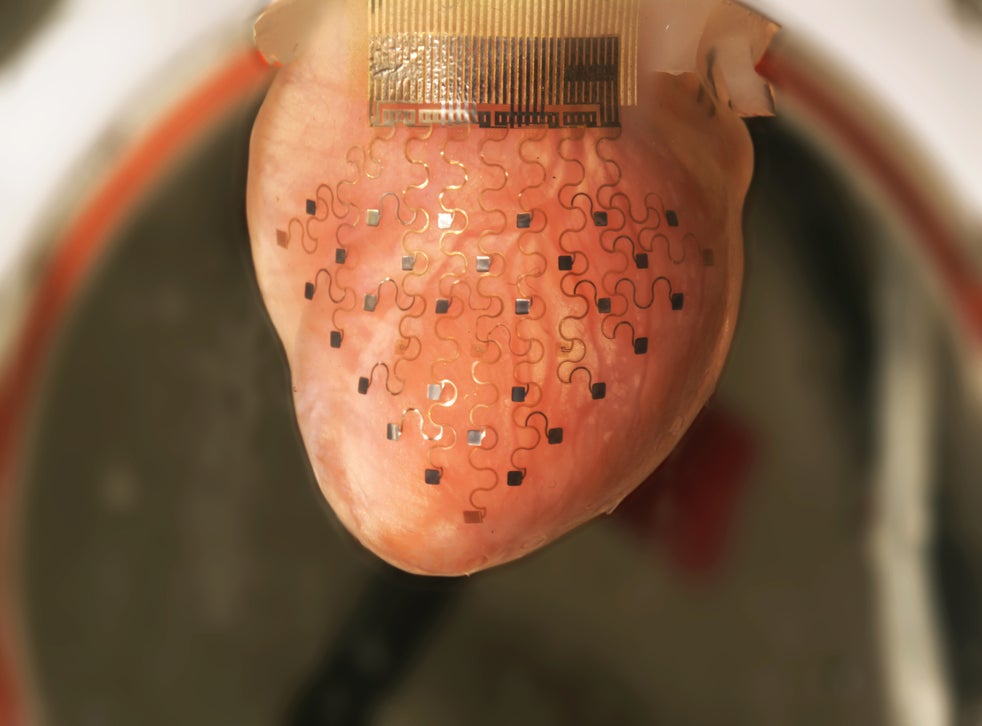 People with atrial fibrillation are often treated with blood thinners or other treatments that may ablate the heart’s pacemaker cells and replace them with electrodes. But these techniques are fairly simplistic and don’t provide much feedback on the heart’s condition.

Keeping the heart beating outside of the body.

“Currently, medical devices to treat heart rhythm diseases are essentially based on two electrodes inserted through the veins and deployed inside the chambers,” study co-author Igor Efimov, a biomedical engineer at Washington University in St. Louis, said in a statement.

Efimov and his colleagues used medical imaging to scan a rabbit heart, and then used 3D printing to create a model for the heart. From there, the team created a thin silicon sheath, embedded with tiny sensors, that fits over the outside of the heart perfectly. The team then tested the mechanical and electrical properties of the heart “jacket” as it contracted with rabbit hearts.

The sensor-filled heart sleeve could one day be used to not only test for heart disease, but also to track the health of other organs, such as the kidneys, the researchers said.

“Because this is implantable, it will allow physicians to monitor vital functions in different organs and intervene when necessary to provide therapy,” Efimov said. “In the case of heart rhythm disorders, it could be used to stimulate cardiac muscle or the brain, or in [kidney] disorders, it would monitor ionic concentrations of calcium, potassium and sodium.”

In addition, the sensors could one day measure an enzyme called troponin, a tell tale marker of heart attacks. That could help doctors detect heart troubles even earlier than current tests.

WHY THIS MATTERS IN BRIEF Anti-aging research has been going through a renaissance over the past few years, and now scientists plan on starting the…

WHY THIS MATTERS IN BRIEF By 2050 we will need to feed 10 billion people, but increasingly we have the technology to ensure noone goes…

WHY THIS MATTERS IN BRIEF All of our vital communications and data are encrypted, and powerful quantum computers will be able to crack almost all…

WHY THIS MATTERS IN BRIEF Neurons play a crucial role in helping ensure our bodies run smoothly, but when they’re damaged, or degrade there can…