When combined with innovation and entrepreneurship technology is a tool that can help us transform the world, and as new powerful emerging technologies become increasingly affordable and democratised our ability to disrupt and transform global culture, industry and society, at scale, accelerates.

Firstly, a big thank you to everyone who supported me over the past year to make 2017 my most enjoyable year yet, and here’s to a prosperous 2018 to you all.

Building on the firm foundation of 2016 and 2017’s Griffin Emerging Technology Starbursts this year’s 2018 Starburst is the culmination of over a decade’s worth of ceaseless investigating, monitoring and tracking the appearance and development of new emerging technologies from every corner of the globe. It’s also clear that, year on year, the volume of new emerging technologies is increasing, and that their impact, power, and sophistication, and ergo their ability, to transform global culture, industry and society, especially as many of them become increasingly democratised, with a pace and voracity never seen before, is also increasing. 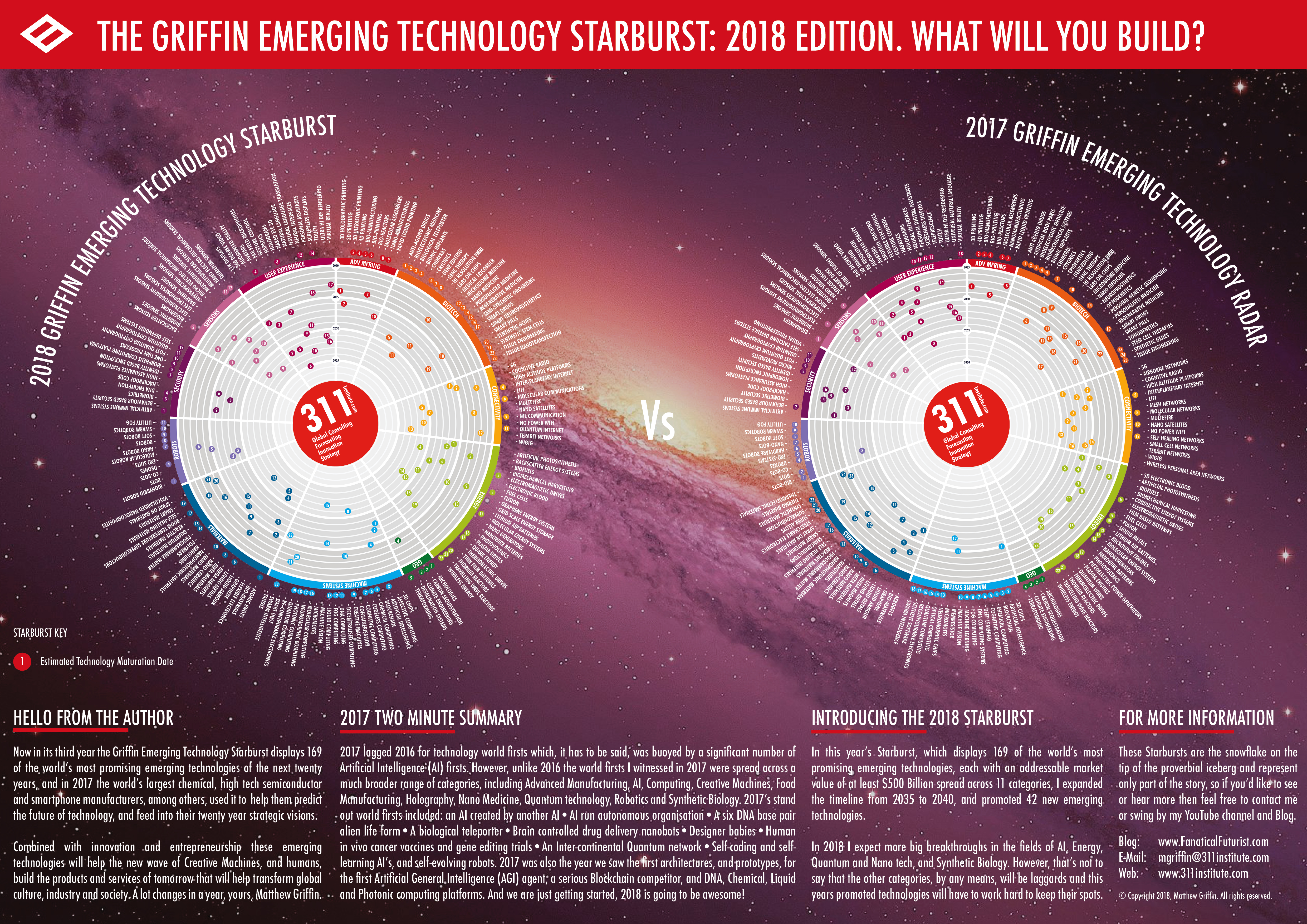 They, whoever “they” are, say a lot changes in a year, computer chips get faster, displays get sharper, storage devices get larger, but a year in the life of emerging technology is like none other that you’ll ever experience. In many ways, it’s like watching technology development on steroids, with what seems to be a decade’s or more progress crammed into just a scant twelve months. And it gets faster and more furious every year.

In this year’s Starburst, which displays 169 of the world’s most promising and coveted emerging technologies, each with an addressable market value of at least $500 Billion spread across 11 categories, I have expanded the horizon timeline from 2035 to 2040, giving you a clear 23 year view of what’s coming, and promoted 42 new emerging technologies that weren’t in last years’ Starburst. Among the hundreds of other emerging technologies I track these include, for example, a new, reconfigurable “unhackable” computer platform, a new communication technology that sends data without using signals, a relatively promising alternative to Blockchain, and six new types of computing platform, and all that’s for starters.

By creating and publishing these Starbursts I’m hoping they help spark people’s imagination, and demonstrate to us all, young and old, rich and poor, that nothing is impossible. For example, a couple of years ago we researchers managed to download, upload and stream images, information and movies directly from people’s brains, using Artificial Intelligence (AI), neural interfaces and the latest fMRI technology, and elsewhere other researchers used these same technologies to build the world’s first human telepathic interface, then, last year, thanks to new developments in the field of lasers, optical sensors and quantum communications technology, researchers teleported photons 300 kilometers into space, and used nano technology to build the first prototype cancer hunting nanobots. And thousands more world firsts and breakthroughs besides.

The Starbursts also have a more practical application though, and that is to help governments, individuals and organisations foresee new disruptive threats to their businesses, economies and industries, and to help them accelerate the development of new products and services.

READ
World first as drones and robots plant, tend and harvest their own crops

In 2017, I’m happy to say, the 2017 Starburst had the impact I hoped it would and it was used  by, among others, the world’s largest smartphone manufacturers, whose handsets are in the palms of billions of people, and high tech semiconductor companies, whose chips power tens of billions of devices, to hundreds of other smaller organisations, to map out the future of their industries, and alternative industries, help them ideate the next twenty years of products and services, and, perhaps more importantly to “figure out what comes next.”

Signing off for now, if I could give you one piece of advice, from all my years of being a “futurist,” it would be forget what you know, open your mind and look forwards to what’s coming, because it’s going to be an awesome ride, and if you want to know more then you’re in the right place, check out my blogs, keynotes and videos, hold onto your hats and let’s go down the rabbit hole.

WHY THIS MATTERS IN BRIEF Defence forms a large part of every sovereign nations capability and identity, so it’s little…

WHY THIS MATTERS IN BRIEF As we push the boundaries and create new, more powerful nuclear reactors, and faster vehicles,…

WHY THIS MATTERS IN BRIEF Any technology like Quantum Radar that renders all traditional stealth obsolete is a game changer….