Technology is a blank slate, but when it is combined with human and machine based creativity, innovation, and entrepreneurship it is a tool that can help us transform the world, and as new powerful emerging technologies become increasingly affordable and democratised our ability to transform culture, industry, and society, at global scale and speed, accelerates.

View the STARBURST COLLECTION AND download THE HI-RES 2019 POSTER

Firstly, I’d like to thank everyone who supported me during 2019 to make it such an interesting and exciting year, and here’s wishing you all a prosperous 2020.

As in previous years, and building on the firm foundation of the previous 2017, and 2018, Griffin Emerging Technology Starbursts this year’s 2019 Starburst is the culmination of years of ceaseless investigating, monitoring, and tracking the appearance and development of new emerging technologies from every corner of the globe, and I am now tracking over 450 of them which is a staggering number when you think about the potential power and impact many of them could and will have in the years and decades to come. It’s also still clear to me that, year on year, the volume of new emerging technologies appearing is still increasing, now from a higher base than in previous years, and that their impact, power, and sophistication, and ergo their ability, to disrupt and transform global culture, industry and society, especially as many of them become increasingly democratised, with a pace and voracity never seen before, is also increasing. 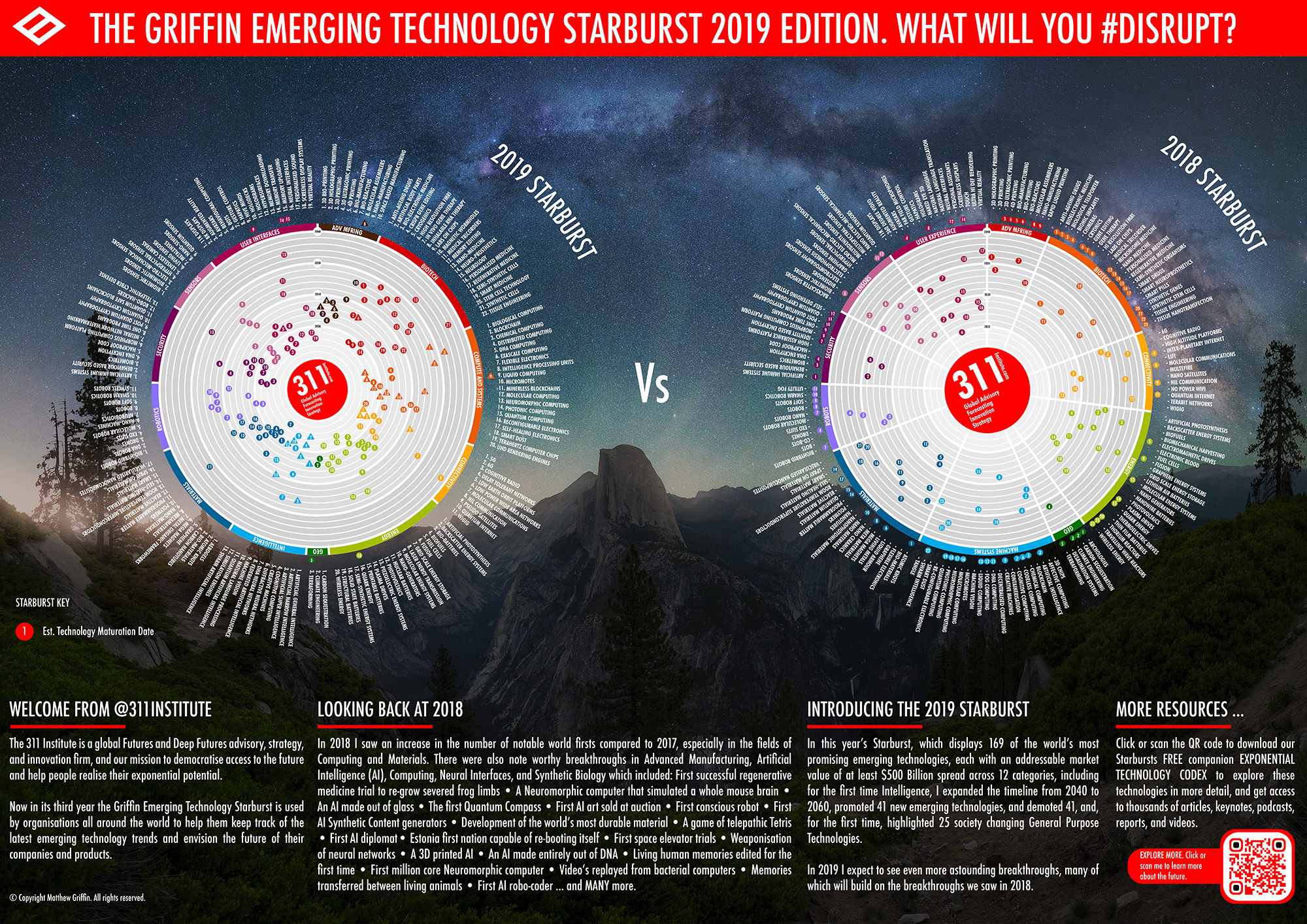 In this year’s Starburst, which displays 169 of the world’s most promising and coveted emerging technologies, each with an addressable market value of at least $500 Billion spread across 12 categories, with Intelligence being a new category, I have expanded the horizon timeline from 2040 to 2060, giving you a clear 41 year view of what’s coming, promoted 41 new emerging technologies that weren’t in last years’ Starburst, and highlighted 25 society changing General Purpose Technologies.

The Starbursts also have a more practical application though, and that is to help governments, individuals and organisations foresee new disruptive threats to their countries, industries, and companies, and, together with our How to Build Exponential Enterprises Codex and our ExPLORER Innovation Framework, help them accelerate the development of new policies, products, and services.

By creating and publishing these Starbursts I’m hoping they help spark people’s imagination, and demonstrate to us all, young and old, rich and poor, that nothing is impossible. For example, this year alone, in a sea awash with sci-fi like breakthroughs and world firsts notable highlights included the development of the world’s first self-designing, self-evolving, and self-replicating AI’s, and AI’s made out of glass, the development of the first programmable DNA computers and 8 base pair DNA organisms, evolutionary robots, and surgical nanobot swarms, the unveiling of human brain streaming and first space elevator trials, the first false memories implanted in song birds, and so much more.

In 2019, again, I’m happy to say, the 2019 Starburst had the impact I hoped it would and it was used  by a wide variety of organisations from across sectors that included G7 and G20 sovereign governments, regulators, household names including Airbus, BMW, Deloitte, Disney, Lego, Samsung, and T-Mobile, as well as Bloomberg, Centrica, Virgin, and many others, who used it envision the future, inform their own corporate strategies and policies, and develop their next generation products and services.

Signing off for now in traditional fashion if I could give you one piece of advice from all my years of being a “futurist,” it would still be be forget what you know and get rid of your preconceptions of what’s possible, keep learning, and keep exploring. And if my Starbursts have left you wanting to learn more about our collective future and deep future then dive into the wormhole and explore this site and all its awesome content, most of which will push your thinking to the limits. 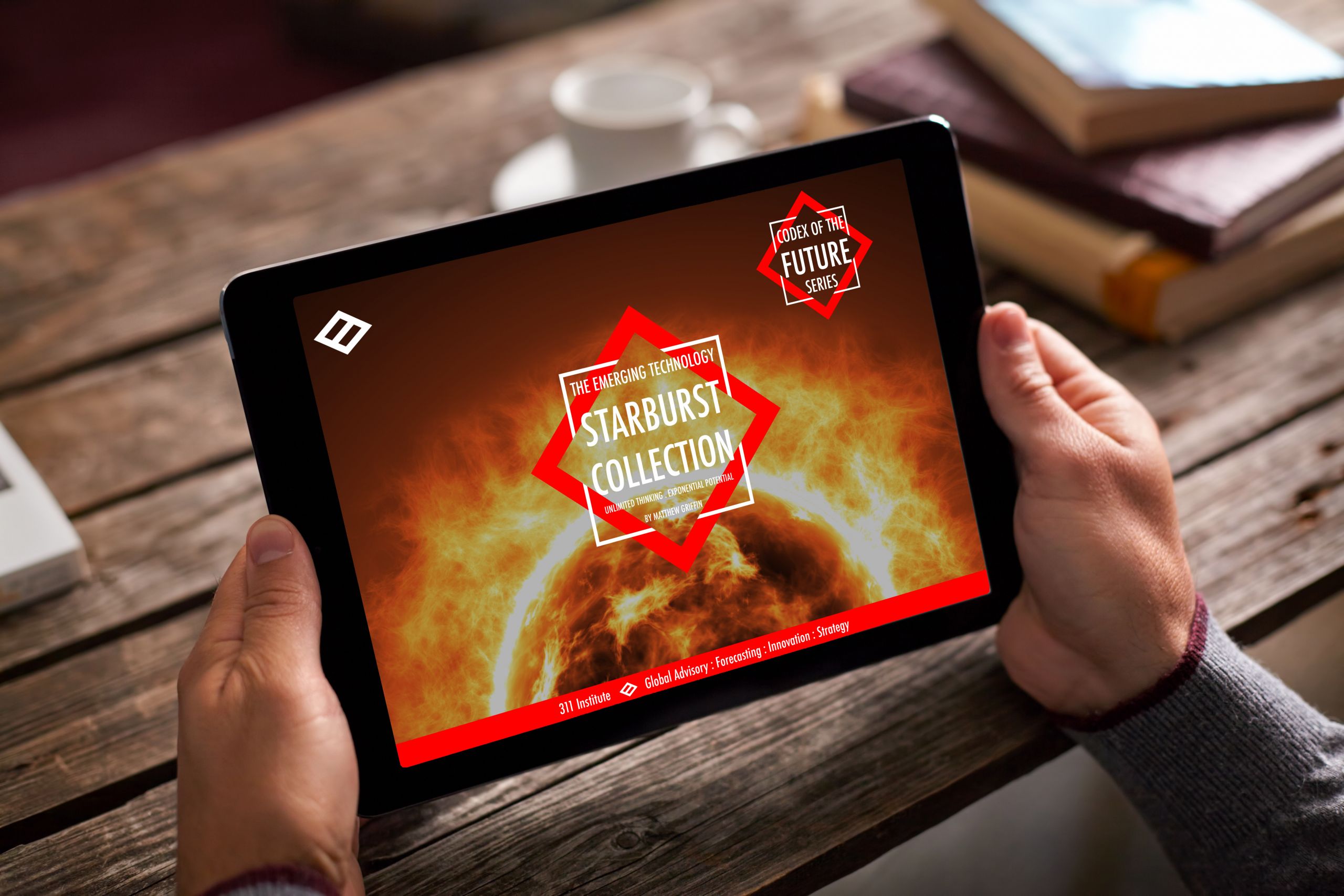 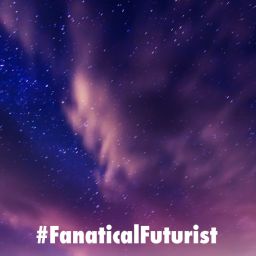 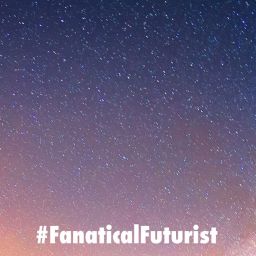