Today’s wearables don’t monitor many of your vital signs or the environment, and now researchers have found a way to close that gap.

Let’s face it, you’re wearable sucks. If it’s anything like mine then all it really does is incorrectly track how many steps you’ve taken and show your heart rate going like the clappers when you’re sat down. In fact that last one might be accurate – after all I do sit down a lot and exercise went out the window years ago. Anyway, the fact of the matter is that despite all their promise the sensors in wearables aren’t that advanced or sophisticated, so as a consequence they miss out of measuring a huge amount of other biometric data, but now researchers at Rutgers University have created a smart wristband with a wireless connection to smartphones that will “enable a new wave of personal health and environmental monitoring devices,” and it can even monitor the your blood. Among other things. Furthermore, as we see Labs on Chips, which are as they sound – literally labs on chips – evolve one day it’s conceivable that these two technologies could be combined to create an even more powerful integrated platform.

Their technology, which the researchers say could be added to watches and other wearable devices that monitor heart rates and physical activity, is detailed in a study published online in Microsystems & Nanoengineering.

“It’s like a Fitbit but has a bio-sensor that can count particles, so that includes blood cells, bacteria and organic or inorganic particles in the air,” said Mehdi Javanmard, senior author of the study and assistant professor at Rutgers. 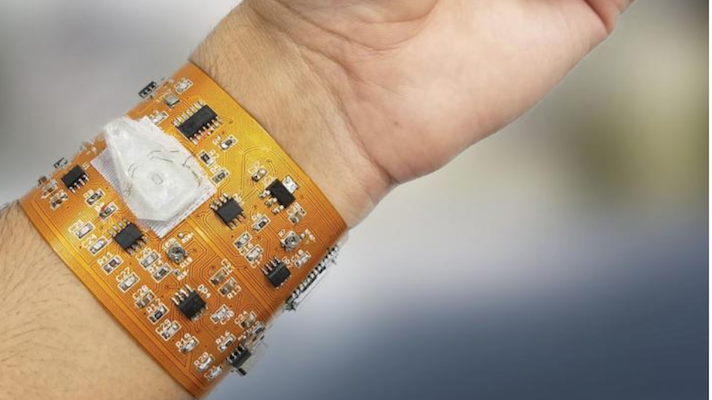 “Current wearables can measure only a handful of physical parameters such as heart rate and exercise activity,” said Abbas Furniturewalla, study lead author and former undergraduate researcher. “The ability for a wearable device to monitor the counts of different cells in our bloodstream would take personal health monitoring to the next level.”

The plastic wristband includes a flexible circuit board and a biosensor with a channel, or pipe, thinner than the diameter of a human hair with gold electrodes embedded inside. It has a circuit to process electrical signals, a micro-controller for digitizing data and a Bluetooth module to transmit data wirelessly.

Blood samples are obtained through pinpricks, with the blood fed through the channel and blood cells counted. The data are sent wirelessly to an Android smartphone with an app that processes and displays data.

In the field, offices and hospitals, health professionals could get rapid blood test results from patients, without the need for expensive, bulky lab-based equipment. Blood cell counts can also be used to diagnose illness; low red blood cell counts, for instance, can be indicative of internal bleeding and other conditions.

Next-generation wristbands could be used in a variety of biomedical and environmental applications, he said. Patients would be able to continuously monitor their health and send results to physicians remotely.

“This would be really important for settings with lots of air pollutants and people want to measure the amount of tiny particles or dust they’re exposed to day in and day out,” Javanmard said. “Miners, for example, could sample the environment they’re in.”

So there we have it, although while it’s a great breakthrough with lots of interesting applications, I’m not sure people will want to wear a smart watch that continually pricks them, but until we get sensors that can use infra red to monitor the composition of your blood then this might be the best we can do so rush down to your stores and demand yours today… or not. In the meantime I’m not rushing anywhere because my watch is telling me my heart rate is 200bpm so I’m going to phone the doctors instead… or an ambulance.

WHY THIS MATTERS IN BRIEF The ability of “unethical actors” to create realistic looking video and audio of famous people to generate “Fake news!” is…

WHY THIS MATTERS IN BRIEF As we discover more about how the brain works, organisations around the world are starting to push the boundaries of…

WHY THIS MATTERS IN BRIEF Self-driving trucks are 30 percent cheaper to run and operate than traditional trucks, and within the next ten years they’re…

WHY THIS MATTERS IN BRIEF Imagine being able to forget memories at the flick of a switch, and now imagine the impact that would have…

WHY THIS MATTERS IN BRIEF It’s getting easier to create DeepFakes and use them for fun or to run scams.   Interested in the Exponential…