As these sensors become more powerful one day we’ll be able to visualise the stress crops are under at scale and intervene to save them.

Today, thanks in part to climate change, plants everywhere are under a lot of stress which can not only reduce crop yields and stunt their growth, and in extreme circumstances it can kill them. While organisations like DARPA in the US are trying to find new ways to bring plants back from the dead and revive them there’s no doubt that being able to measure and monitor the amount of stress plants are under would be useful, and now scientists in the US have found a way to do just that.

Certain “SnRK2” kinases are essential since they are known to be activated in response to drought conditions, triggering the protective closure of small pores on leaf surfaces known as stoma. These pores allow carbon dioxide to enter leaves, but plants also lose more than 90 percent of their water by evaporation through them. Pore opening and closing functions help optimize growth and drought tolerance in response to changes in the environment.

Now, plant biologists at the University of California San Diego have developed a new nano-sensor that allows researchers to monitor SnRK2 protein kinase activity in live plant cells. The SnRK2 activity sensor, or “SNACS,” is described in the journal eLife.

Prior efforts to dissect protein kinase activities involved a tedious process of grinding up plant tissues and measuring kinase activities through cell extracts. More than 100 leaves were required per experiment for analyses of the stomatal pore forming “guard cells.” SNACS now allows researchers to analyse changes in real time as they happen. 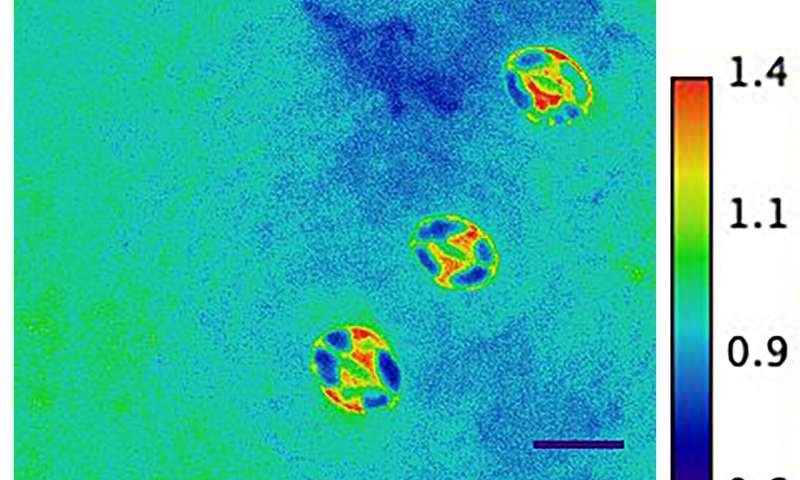 For the first time we can see stress in plants.

“Previously, it was not possible to investigate time-resolved SnRK2 activity in living plant cells,” said Biological Sciences Distinguished Professor Julian Schroeder, a member of the Section of Cell and Developmental Biology and senior author of the new paper. “The SNACS sensor reports direct real-time visualisation of SnRK2 kinase activity in single live plant cells or tissues.”

The new biosensor is already paying dividends. The researchers describe using SNACS to provide new evidence about longstanding questions about SnRK2 and foundational interactions with carbon dioxide. The researchers show that abscisic acid, a drought stress hormone in plants, activates the kinases, but that elevated carbon dioxide does not, resolving a recently debated question.

“Our findings could benefit researchers investigating environmental stress responses in plants and analysing how different signalling pathways interact with one another in plant cells,” said Yohei Takahashi, a UC San Diego project scientist and co-corresponding author of the study. “The ability to investigate time-resolved SnRK2 kinase regulation in live plants is of particular importance for understanding environmental stress responses of plant cells.”

The new nanosensor was developed using an approach pioneered by the late UC San Diego Professor Roger Tsien, in part for which he was awarded a Nobel Prize.

WHY THIS MATTERS IN BRIEF The rise of fully autonomous vehicles are allowing innovators to come up with new concepts and travel ideas.   Question:…

WHY THIS MATTERS IN BRIEF Increasingly Apple wants to be your wallet, your payment provider, and maybe one day your bank of choice, but if…

WHY THIS MATTERS IN BRIEF The more people talk about and experiment with new technologies, like flying taxis, the more likely they are to get…