Squid have a huge number of secret skills, and now thanks to genetic engineering humans could one day have those same skills too.

People everywhere want superpowers – even though their own individuality is in fact its own superpower. See what I did there? You’re already awesome! However, sometimes even awesome can be improved upon and secretly everyone wants another superpower. Fortunately science is here to grant your wish and today we already have the technology to let you shoot laser beams from your eyes, give you infra red vision and Spiderman’s spidey sense, turn yourself into the universes most powerful biological supercomputer, merge your mind with AI, and let you stream your thoughts to TV and communicate telepathically with other people.

One of the other superpowers people often ask for is invisibility, and while we already have invisibility cloaks made from metamaterials there’s arguably nothing like being able to flick a switch and turn yourself invisible for real. And now your luck’s in and one day it might be possible even if it’s in an odd way and probably doesn’t quite end up matching your lofty expectations. 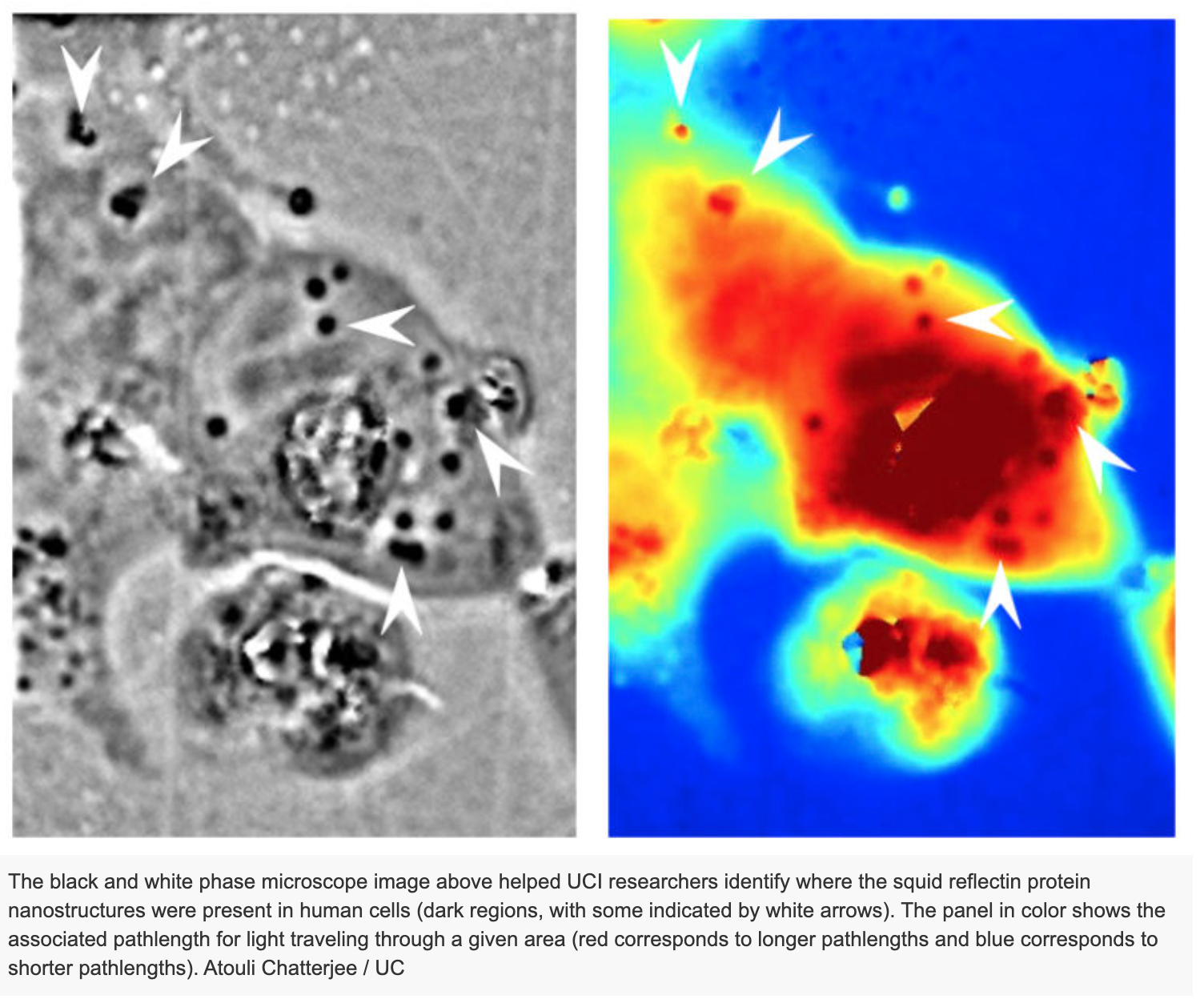 Of all the superpowers in the animal kingdom, the squid’s ability to turn invisible is one of the coolest. And now scientists at the University of California, Irvine have managed to recreate that in human cells for the first time, granting them tuneable transparency.

Active camouflage is a survival strategy used by many cephalopods, including octopuses, squids and cuttlefish. The animals pull off this feat with the help of cells that change how light scatters off of them, allowing them to change color or effectively turn transparent. Understandably, this could come in very handy for new camouflage materials. But could this ability be transferred to our own cells? That was what the new study set out to investigate.

The researchers focused on a particular species of squid called Doryteuthis opalescens, which can change a stripe along its body from white to transparent. This stripe is made up of reflective cells called leucophores, which themselves contain particles called leucosomes that are made up of proteins called reflectins. Altogether, this structure is what allows the squids to scatter light, producing iridescent camouflage.

For the new study, the UC Irvine team attempted to introduce that ability into human cells. To do so, they genetically engineered human embryonic kidney cells to express reflectin, and sure enough it worked. On closer inspection, the proteins were seen to gather into particles inside the cells, altering how they scattered light.

“We were amazed to find that the cells not only expressed reflectin but also packaged the protein in spheroidal nanostructures and distributed them throughout the cells’ bodies,” says Alon Gorodetsky, co-author of the study. “Through quantitative phase microscopy, we were able to determine that the protein structures had different optical characteristics when compared to the cytoplasm inside the cells; in other words, they optically behaved almost as they do in their native cephalopod leucophores.”

In another test, the team investigated how this ability could be controlled. The cells were placed between two plates of coated glass and exposed to different amounts of sodium chloride. They found that under higher sodium levels, cells appeared to scatter more light and stand out from their surroundings better than those exposed to lower sodium levels.

Unsurprisingly, cells that lacked the reflectin particles weren’t able to adjust how they scattered light. It sounds obvious, but the scientific method requires that these things are checked, just to be sure.

“This project showed that it’s possible to develop human cells with stimuli-responsive optical properties inspired by leucophores in cephalopods, and it shows that these amazing reflectin proteins can maintain their properties in foreign cellular environments,” says Gorodetsky.

WHY THIS MATTERS IN BRIEF All vehicles are going autonomous, and this is the first time a fully autonomous truck has successfully gone coast to…

WHY THIS MATTERS IN BRIEF Man hasn’t returned to the Moon since first landing on it 45 years ago, and this will be the first…

WHY THIS MATTERS IN BRIEF Defence forms a large part of every sovereign nations capability and identity, so it’s little surprise that it’s one of…

WHY THIS MATTERS IN BRIEF Building a few prototype self-driving cars is one thing, but mass producing them is another ball game entirely, and now…

WHY THIS MATTERS IN BRIEF There is an increasing amount of interest in creating drugs that improve cognition and intelligence, and their use is on…

WHY THIS MATTERS IN BRIEF Nvidia is a chip company on the rise, their GPU’s are increasingly underpinning most company’s AI learning initiatives, and they’re…

WHY THIS MATTERS IN BRIEF Developing games worlds takes up a huge amount of money, time and effort, but now even newbies can generate realistic…

WHY THIS MATTERS IN BRIEF As the cost of accessing space falls exponentially it opens the door to a whole new era of space tourism….