Ocular lasers have many applications, but frankly I’m not sure what most of those could be (yet). Death rays anyone?

Recently I talked about a new set of Mission Impossible style smart contact lenses that give the wearers “special powers,” but now how about using them to shoot lasers? Well, finally, science is working to provide us the seemingly absurd superpowers we were promised in comic books, even for those of us who weren’t raised on the planet Krypton, and now researchers have developed a technology that could make it possible to actually shoot laser beams from your eyes, Superman-style, a concept whose roots go much further back than the Man of Steel’s origin story in the minds of a few teenagers in Ohio in the 1930s. And they’ve even given the new technology an appropriate moniker – “Ocular Lasers.” Cool.

“In ancient Greece, Plato believed that visual perception is mediated by ‘eye beams’ – beams actively sent out by the eyes to probe the environment,” explains Professor Malte Gather of the School of Physics and Astronomy at the University of St. Andrews in Scotland who led the new research. “Plato’s emission theory has of course long been refuted, but superheroes with lasers in their eyes live on in popular culture and comic books. Our work represents a new milestone in laser development and, in particular, points the way to how lasers can be used in inherently soft and ductile environments, be it in wearable sensors or as an authentication feature on bank notes.”

In his case Gather and his team developed “an ultra-thin membrane laser using organic semiconductors,” and they published a peer reviewed paper explaining their work in Nature Communications claiming that the tiny lasers can be safely operated in the human eye. Perhaps even more importantly though – they actually created a working prototype using a cow eye as a model.

“By floating a thin plastic film off of a substrate we have made some of the world’s smallest and lightest lasers and put them on contact lenses and bank notes,” Samuel said. “And by varying the materials and adjusting the grating structures of the laser, the emission can be designed to show a specific series of sharp lines on a flat background – the ones and zeros of a digital barcode.”

For now though the idea is not to equip human eyeballs with new weapons, but instead to use the technology as a new security feature, for example for authentication purposes. But the former definitely sounds way cooler.

WHY THIS MATTERS IN BRIEF The power grids used by most countries were born in a different era, but now,… 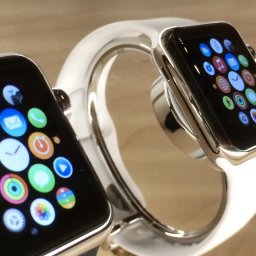 WHY THIS MATTERS IN BRIEF Every day we’re finding new ways to power our planet, but what if the plants…