As our ability to create nanoscale bots and machines gets better we will need ways to make them move.

Today we’re building lots of tiny tiny things, like cancer killing nanobots, bio-hybrid robots that are part plant, part robot, and all manner of nanomachines – including a tiny nanoscale house that’s smaller than a human hair. And asides from being tiny they all have one thing in common – they all need engines to move.

So far I’ve talked about the development of new enzyme engines that power some of these nanoscale bots, and now a research team from EMPA and EPFL have unveiled the world’s smallest engine made up of only 16 atoms that rotates in one direction in order to move. The breakthrough could also allow energy harvesting at the atomic level.

“This [engine] brings us close to the ultimate size limit for molecular motors,” explains Oliver Gröning, head of the Functional Surfaces Research Group at EMPA. The motor measures less than one nanometer in size, in other words it is around 100,000 times smaller than the diameter of a human hair. 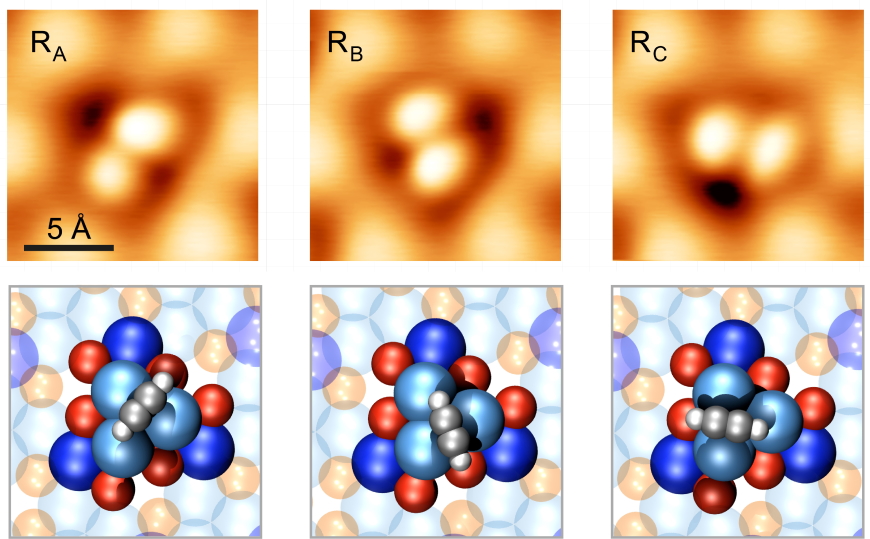 A closeup of the new motors. Courtesy: EMPA

In principle, a molecular machine functions in a similar way to its counterpart in the macro world, it converts energy into a directed movement. Such molecular motors also exist in nature, for example in the form of Myosins. Myosins are motor proteins that play an important role in living organisms in the contraction of muscles and the transport of other molecules between cells.

Like a large scale motor the 16 atom motor consists of a stator and a rotor, in other words, a fixed and a moving part, and as you can see the rotor rotates on the surface of the stator. It can take up six different positions.

“For a motor to actually do useful work, it is essential that the stator allows the rotor to move in only one direction,” explains Gröning.

Since the energy that drives the motor can come from a random direction, the motor itself must determine the direction of rotation using a ratcheting scheme. However, the atom motor operates opposite of what happens with a ratchet in the macroscopic world with its asymmetrically serrated gear wheel: While the pawl on a ratchet moves up the flat edge and locks in the direction of the steep edge, the atomic variant requires less energy to move up the steep edge of the gear wheel than it does at the flat edge. The movement in the usual “blocking direction” is therefore preferred and the movement in ‘running direction’ much less likely. So the movement is virtually only possible in one direction.

The researchers have implemented this “reverse” ratchet principle in a minimal variant by using a stator with a basically triangular structure consisting of six palladium and six gallium atoms. The trick here is that this structure is rotationally symmetrical, but not mirror-symmetrical.

As a result, the rotor, which is a symmetrical acetylene molecule consisting of only four atoms can rotate continuously.

“The motor therefore has 99 percent directional stability, which distinguishes it from other similar molecular motors,” says Gröning.

The tiny motor can also be powered by both thermal and electrical energy, and as the team perfect the technology one day we could find these types of motors powering future molecular assemblers as well as the nanobots and nanomachines that are coursing through our blood vessels doing all kinds of stuff – including performing surgery.

WHY THIS MATTERS IN BRIEF The exponential growth in data volumes mean today’s technologies are bursting at the seems so we need new ones.  …

WHY THIS MATTERS IN BRIEF Species are going extinct today 10,000 times faster than ever before, and conservationists are getting increasingly serious about turning the…

WHY THIS MATTERS IN BRIEF Hypersonic platforms, from autonomous aircraft to “carrier killers” and missiles, so it’s inevitable that over the next five or so…

WHY THIS MATTERS IN BRIEF AI, the Genie we’ve let out of the bottle is on the cusp of improving at an exponential rate and…

WHY THIS MATTERS IN BRIEF Renewable energy is taking over the world, with thousands of Gigawatts now installed around the world, and the price is…