As our knowledge of neural networks improves it turns out we can give almost everything “intelligence.”

Recently, I talked about a team of researchers in the US that had managed to 3D print an Artificial Intelligence (AI) neural network, and another team that had made a complex neural network from DNA. But now, in another new development in the field of what’s known as Diffractive Neural Networks, a team of researchers have created the smartest piece of glass in the known universe.

Zongfu Yu at the University of Wisconsin–Madison and his colleagues have created a glass based AI that uses light to recognise and distinguish between images. What’s more, the glass AI doesn’t need to be powered to operate.

The proof-of-principle glass AI that Yu’s team created can distinguish between handwritten single digit numbers. It can also recognise, in real time, when a number it is presented with changes – for instance, when a 3 is altered to an 8. 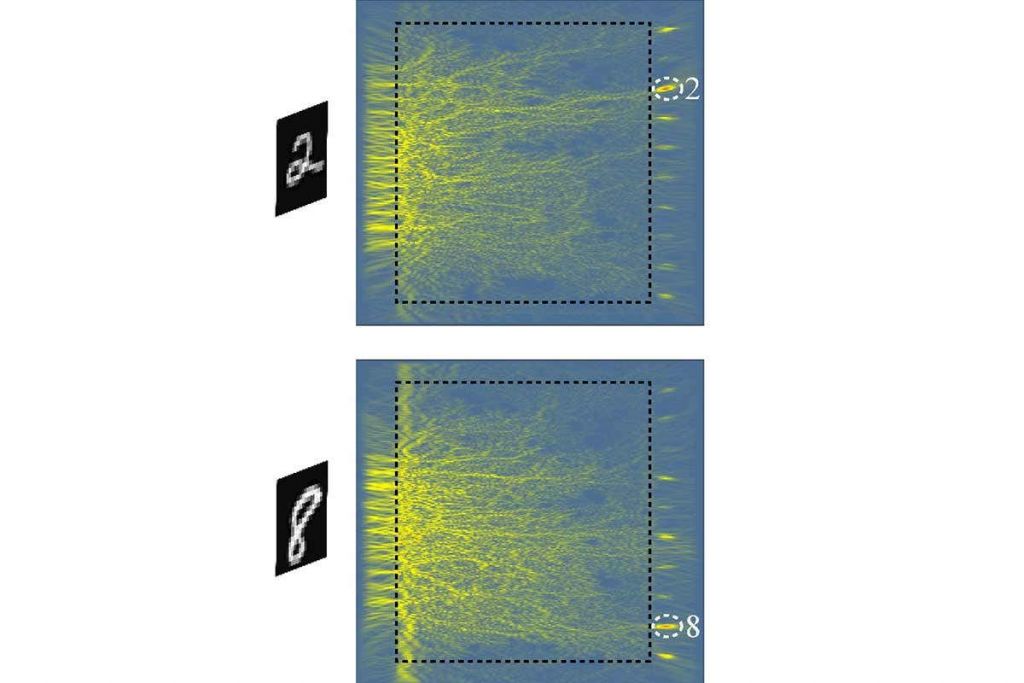 The AI works by taking advantage of small bubbles deliberately incorporated into the glass, as well as embedded impurities such as graphene. As the light waves reflected off the handwritten numbers pass through the glass AI, they are bent in specific ways by the bubbles and impurities. This bending process focuses the light onto one of ten specific spots on the other side of the glass, depending on the number presented. The ten spots then correspond to the digits 0 to 9.

Training the AI involved presenting the glass with different images of handwritten numbers. If the light did not pass through the glass to focus on the correct spot, the team adjusted the size and locations of impurities slightly. After thousands of iterations, the glass “learned” to bend the light to the right place. The impurities basically act as “artificial neurons”, says Yu.

The glass can focus light to detect the correct number even when it is written in different styles.

“Given a completely new object – still a hand-written digit – it will correctly focus the light,” says Yu.

The team has demonstrated that the concept works, but how it could be used in real life is still uncertain, but it does carry certain advantages, such as the fact that it works passively, without the need for electricity, and it’s hard to argue with the fact that in tomorrow’s crazy world there won’t be multiple applications for it – perhaps in industries as diverse as transportation where passive machine vision systems could be useful or even in space.

“It will last as long as your window glass,” says Yu.

It’s possible that the glass AI could eventually be used as a kind of “biometric lock”, he says. Individual glass AIs could be used for specific tasks, such as recognising a person’s face. “You will have lots of little, inexpensive, disposable smart things that work under extremely tight energy, bandwidth, and dollar budgets,” he says.

But whether this would be practical remains to be seen, largely because the glass AI lacks the flexibility of those that run on computer processors, which can be used for multiple and varied tasks.

WHY THIS MATTERS IN BRIEF Drone technology is advancing at a furious rate and military powers around the world are exploiting them to their advantage,…

WHY THIS MATTERS IN BRIEF In the future we won’t be able to believe everything we see or read, irrespective what the content is, so…

WHY THIS MATTERS IN BRIEF As odd as this might sound it’s actually a very logical idea when you think about it, and NASA aren’t…

WHY THIS MATTERS IN BRIEF They say that people learn faster when they are able to live the experiences they’re being taught, and that could…

WHY THIS MATTERS IN BRIEF Being able to turn human cells into powerful, living computing systems will revolutionise computing, energy, and healthcare, along with a…