Nanobots are one of the ultimate medical frontiers and science fiction classics, and they’re slowing beginning to show their promise.

Recently I discussed how we’re building the first generation of enzyme powered nanobots capable of hunting and tracking down disease within the human body and eliminating it, and then I wrote an article that included a video of researchers controlling the first nanobot swarm capable of performing basic in vivo human surgery. Now though a new prospect for cancer treatment within the human body has opened up after researchers in China and the US successfully used tiny, nanometre-sized robots to treat and kill cancerous tumours in mice.

Researchers from Arizona State University and the National Center for Nanoscience and Technology of the Chinese Academy of Sciences injected nanobots made from a folded sheet of DNA into the bloodstream of mice. These targeted the blood vessels around cancerous tumours, injecting them with blood clotting drugs to cut off their blood supply. 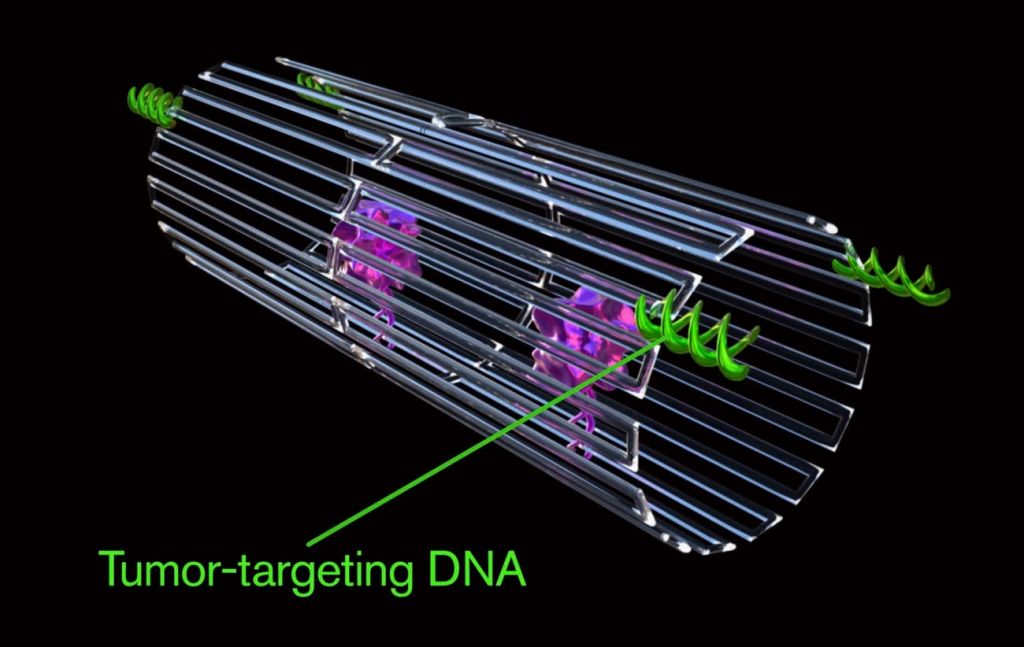 When this DNA origami nanorobot detects blood vessels associated with tumors, it opens up and flattens itself to deliver thrombin, a clotting factor that chokes off the blood supply to the tumor.

According to the study, published in Nature Biotechnology the treatment was successful in shrinking the tumours and inhibiting their spread, a world first.  The idea of armies of minuscule robots patrolling our bodies, cleaning and maintaining them has been a theme in science fiction for decades. The plot of a1966 film Fantastic Voyage in which a submarine of scientists is shrunk to microscopic size and injected into the blood stream of a colleague in order to help save his life, is now coming closer to reality.

Scientists are exploring the use of nanobots for a number of healthcare uses, not only for fighting cancer, but also to unblock blood vessels in hard to reach areas, taking biopsies or measuring the level of certain chemicals in otherwise inaccessible areas of the body. A nanobot is a device typically ranging from 0.1-10 micrometres in size, or roughly the size of a red blood cell or smaller. This is too small to add a traditional robotic element like a motor, computer chip or camera, explains Eric Diller, assistant professor, who leads the microrobotics laboratory at the University of Toronto.

Bioengineered bots made from DNA, such as those used in the mouse tumour tests, have already been shown to be capable of delivering small doses of drugs with great precision, for example, in another test a team of researchers even managed to use brainwaves from a human volunteer to control their nanobots behaviours and release the drugs in precisely the right spot within cockroaches, and yes, you heard all that right…

READ
An AI just wrote, directed and produced its own appalling film, but it's the future

Obviously though a lot of hurdles have to be overcome before these little bots reach clinical trials. Getting the minuscule robots to travel to a precise site in the body and stay there long enough to carry out a procedure is a big challenge, given the speed and frequency of blood flow in the human body. Nanobots must also avoid being expelled from the body like other toxic or foreign bodies.

“Injecting it [the nanobot] into the blood stream and letting itself find the target is pretty much akin to the problem we have with chemotherapy,” says Professor Guang-Zhong Yang, director and founder of the Hamlyn Centre of Robotic Surgery at Imperial College London, who recently discovered their own way of curing Cystic Fibrosis with just an ordinary inhaler. Chemotherapy drugs kill both healthy and cancerous cells, so injected nanorobots would need to differentiate between them carefully in order to surpass chemo as the main form of cancer treatment.

It will also be easier for the nanobots to operate in parts of the body where blood flow is slower, such as capillaries in the eye or in fluids outside the circulatory system, such as the ventricles of the brain or urinary tract, says Mr Diller.  Ultrasound could be used to propel the nanobots, or, alternatively, bacteria or viruses could be used to carry them to a specific site. Researchers are also exploring ways to use magnetic fields to get the nanobots to reach specific sites and remain in place, against the flow of blood, which is what the researchers who created the world’s first nanobot swarm I mentioned above used.

Another challenge is tracing nanobots when they are inside the human body, since they are too small to show up on X-rays and other traditional imaging technology. Tracking is essential not only to ensure the nanobots carry out their intended procedures, but also to ensure that the devices, and any tissue they have disrupted, are safely removed. And funnily enough, even though it’s obviously a nascent field repleat with challenges it’s already a problem being worked on by researchers in the US who recently built the world’s first smart pill that will track all the nanobots in your body.

READ
The end of Paralysis gets closer

“This is a serious challenge for our field to overcome. There is no clear answer,” says Mr Diller, adding, “Making the nanobot biodegradable is one possible solution.

Richard Kerr, consultant neurosurgeon and council member of the Royal College of Surgeons of England, chairing its Commission on the Future of Surgery, though believes these technical issues will be resolved because of the glut of expertise and research money pouring into the field.

The global nanomedicine market was estimated to be worth $138.8bn in 2016, according to market research company Grand View Research. Making the technology cost effective, however, poses a far greater challenge, he says.

“The issues are more about the application of it — how we use it and how we bring it to the clinic within an economical framework.”

With infection, obesity, starvation and diabetes the most pressing global health problems, critics argue that pursuing expensive treatments such as nanobots is not the best use of scarce medical research funds. The cost effectiveness of robotics in surgery is already under scrutiny: a recent study from Stanford University School of Medicine, found that robot-assisted surgery to remove diseased kidneys cost more than traditional surgery and the outcomes were no better. For nanobots to be successful, they must show that they can exceed the limitations of human surgeons, rather than replicating what they already do, Mr Kerr says.

“This technology has to be an aid to surgeons and allow them to do either something they couldn’t before — or it has to do something we were doing before but better,” he says.

Precision targeting of cancerous tumors, as seen in the Arizona State University study with mice, could be a case where nanobots can go where a human surgeon’s scalpel cannot reach though, so this nanobot demonstration might stand a better chance than others one day in the future.

WHY THIS MATTERS IN BRIEF The future of warfare is digital and telepathic, and both types of warfare are now starting to enter the mainstream….

Californian regulators allow driverless shuttles to be tested without drivers

Regulators and innovators are uneasy bed fellows but slowly regulators are relaxing the reigns, letting companies do what they do best – innovate A bill signed…

WHY THIS MATTERS IN BRIEF Submarine engines are noisy, for a hole host of reasons, but China’s latest engine is the quietest in the world…