Creating new lifeforms sounds like fun and they taste great too.

Raising glasses of genetically modified beer, the synthetic biologists at Ginkgo Bioworks celebrated the launch of their new automated lab last month and you can take a virtual tour of their facility here. By applying engineering principles to biology, and with the help of some nifty robotic equipment, Ginkgo has created a factory for churning out exotic lifeforms – the likes of which have never before been seen on this planet.

The home brew was an example of the potential applications of synthetic biology – an emerging new industry that sits at the convergence of manufacturing and biology and that is the natural extension of recent breakthroughs in gene editing, gene modification and – more importantly – gene synthesis where scientists can create new genetic material, and new synthetic organisms from scratch. Translated – scientists can now manufacture snippets of synthetic DNA and slip them into organisms, giving those critters strange new capabilities. It signals the end of evolution and Darwinism as we know it.

For example, the brewer’s yeast used to make beer for the launch party had genes from an orange tree added to its own DNA. During the fermentation stage of the brewing process, those genes caused the yeast to produce Valencene, an organic compound with a citrusy flavour and speaking scientifically, of course, it’s delicious.

Ginkgo Bioworks, a hip young company based in South Boston, recently raised $100 million on the promise of finding many such useful applications for synthetic biology. And it used some of that cash to build Bioworks2, the company’s vast new lab that uses robotic systems to make an assembly line for organisms. 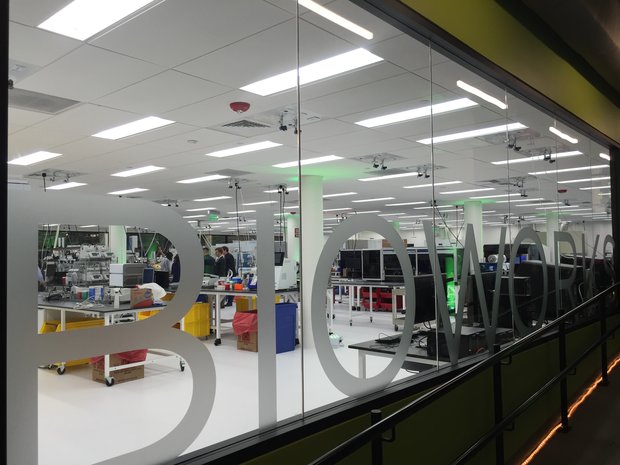 Ginkgo needs to make microbes on a grand scale in order to find the ones that can function as tiny biological factories. When a client comes in with a request for a custom-made organism, Gingko begins its bulk experimentation. Many of the altered organisms will be duds, but through cycles of iteration the bioengineers eventually devise a microbe that turns out the desirable product. At the moment the company is experimenting with organisms that produce chemical ingredients for perfumes, beverages, pesticides, and laundry detergent, and all of that is just the beginning of a new revolution.

Ginkgo Bioworks’ business model centers on the microbes themselves, not the end products.

“We specialize in the organsims, and we partner with our customers who will make the product.”

Ginkgo licenses organisms to its customers, she says, and gets royalties if they’re used.

But building an organism to spec is no easy task. Genetics still isn’t well understood, although it can be said that scientists are unravelling the mysteries of genes at a staggering rate, there’s no universal catalog listing of genes that details what they all do. And biology is messy. Even if researchers know what a particular gene does in an orange tree, for example, when they add it to a yeast cell, it might interact with the native DNA in unexpected ways. If they’re adding several genes from different species to that yeast cell, things get even more complicated.

That’s why Ginkgo takes an engineering approach to biology, hewing to a rigorous design-build-test cycle. In this case, they’re designing, building, and testing living organisms.

“In grad school, I might have taken my five best ideas and tried them out,” Boyle says, “here we take our 1,000 best ideas, try them all out, and see which works best.”

So how does that design, build, and test cycle work in practice? Take Ginkgo’s first efforts in the perfume business as an example. Ginkgo is working with the French perfumier Robertet on a yeast that spits out rose oil. There’s a business case for making this microbe. Extracting traditional rose oil from rose petals is expensive, and high end perfumiers look down on chemical substitutes. But adding the right genes from a rose plant to a yeast cell could make it produce the real oil, just in an untraditional way.

A yeast serves as the biological “chassis,” the base for the customized creature. Ginkgo designers then search the scientific literature, looking for genes that would cause a cell to produce useful enzymes. They’re looking for enzymes that can work within the yeast cell’s metabolic process; when they feed sugar to the yeast it should carry out chemical reactions that ultimately result in rose oil.

They hunt for genes all across the biological kingdoms.

“We ask, ‘How have different biological niches solved this biochemistry problem, and how can we adapt them to our purposes?’” says Boyle. They can combine genes from different organisms into metabolic pathways, but this requires scaled-up science.

“If you have 100 possible enzymes that can serve as a step in a four-step pathway, that’s a lot of design space to explore,” Boyle says.

Ginkgo outsources the actual manufacturing of synthetic DNA, ordering up batches from companies like Twist Bioscience and Gen9. Boyle says the company will receive 700 million base-pairs of synthetic DNA in the next year and a half, which represents half the world’s current market for synthetic DNA. A company like Ginkgo can only exist because the cost of manufacturing DNA has recently come down dramatically – from over $10 million per gene in 2005 to under $10,000 today.

When a batch of manufactured DNA arrives at Ginkgo, liquid handling robots add the various snippets to yeast cells and let the cells grow and multiply. Creative director Agapakis says these robots are getting better and better.

“During my PhD, I spent a lot of time moving tiny amounts of fluid around,” she says, “when we started Ginkgo, a lot of the robots looked like eight-armed grad students – there were a lot of pipettes.”

Now Ginkgo has liquid-handling robots like the Labcyte Echo 525, which moves nanoliters of liquid using targeted pulses of sound. The machine sends ultrasonic waves upward at a sample plate, focusing on just one of the plate’s 1,536 tiny wells, and propels the droplet of liquid upward to a new vessel. It can move the contents of a plate in about 20 minutes.

Once Ginkgo has 1,000 yeast variants containing different mashups of genes, it’s time to see if the cells are making their product, for example, rose oil. The researchers use mass spectrometry machines to break apart the cells and examine all the molecules inside. They check whether the yeast is producing the oil, of course, but also whether the yeast is healthy. Using some of the cell’s metabolic energy to produce rose oil could interfere with other processes and “change the total picture,” says Agapakis.

Even when they’ve found a few yeast variants that seem to do a good job of cranking out oil, Ginkgo’s job isn’t done. The bioengineers still need to see whether the organism can make a product that’s truly useful to the customer.

Boyle says that in the case of rose oil, they study each yeast to determine its overall “fragrance profile.” While a cell may be making certain useful fragrance molecules, it may be making other molecules that are distinctly not useful.

“I like the fresh-baked bread smell, but it’s not great when you’re trying to sell a perfume,” Boyle says, “so how do we cut down on background fragrances?” The perfume, which could currently be called eau de baguette, is still a work in progress he says.

Perfume is just the beginning for this ambitious company. Agapakis sees biological manufacturing as the way of the future, and she doesn’t mind sounding like “a college student in a dorm room” when she talks about it.

“Biology makes things that grow themselves,” she says, “a tree grows itself from sunlight and water, that’s amazing.”

At Bioworks2, she hopes to create experimental lifeforms that will really blow college students’ minds.

WHY THIS MATTERS IN BRIEF Being able to control and read the minds of animals and insects used to be sci fi, now it’s real…

Blockchains momentum keeps rolling on with another company announcing another major push Another company jumped on the blockchain bandwagon in a big way, with Wanxiang’s…

WHY THIS MATTERS IN BRIEF Hundreds of thousands of babies are born prematurely and, one day, this breakthrough will offer parents new hope, it could…

Experts around the world agree that we could be entering an era of Cold War 2.0, and that’s bad news Foreign states such as China…

WHY THIS MATTERS IN BRIEF As the world comes to rely more and more on bots and robots we need better, and faster, ways to…