Tomorrow’s world will be increasingly connected, and connecting old legacy devices and things has been difficult, but it’s about to get much easier.

Engineers are good at making minuscule antennas. Nowadays, we can cram antennas into our smartphones or smartwatches without much trouble. But from the perspective of those devices, the antennas inside them are still bulky and take up too much space.

Now, researchers at Drexel University, in Philadelphia, have developed a thin, lightweight, and flexible spray on 2D antenna solution that can be sprayed onto everyday objects, whether they’re wearable devices or Internet of Things products, legacy buildings and other city infrastructure, or even baby cribs and socks, if you so fancied, that can be used to connect them to the rest of the world in a way that was unimaginable just a few years ago. They published their work in Science Advances.

The transparent Titanium Carbide antenna is also a good option for any device in which you don’t want to actually see the antenna, says Asia Sarycheva, a Ph.D. student in Drexel’s Department of Materials Science and Engineering, who conducted the research.

“With smart windows, for example, you have to have transparent circuits to send signals. Or solar cells – you need everything [to be] transparent.”

Of course, the antenna isn’t truly 2D but it is incredibly thin. It’s made from a type of material called a MXene which is characterised by a metal like Titanium or Molybdenum bonded with Carbides or Nitrides.

The spray on description is exactly what it sounds like. By dissolving MXenes in water, researchers produce a kind of water based ink.

“Then we can just use a simple spray gun from Home Depot, and just spray the shape we want,” Sarycheva says.

The antenna the group constructed is roughly 100 nanometers thick. For comparison, copper antennas used today have a minimum thickness of about 3,000 nm.

“As soon as the ink dries, it’s ready to be used as an antenna,” says Babak Anasori, a nanomaterials researcher at Drexel.

Anasori says their group became interested in this approach when they found, in 2016, that a Titanium Carbide MXene has high electromagnetic interference shielding, which suggested to them that it would block unwanted electromagnetic signals. Around the same time, they noticed that researchers were publishing papers using nanomaterials, like carbon nanotubes, as antennas.

In addition to resisting electromagnetic interference, MXenes like Titanium Carbide had another advantage over carbon nanotubes.

That was all the inspiration they needed to pursue MXenes as a viable candidate to compete with traditional antennas and emerging alternatives. And an early test supported their suspicions that MXenes could work.

“We were getting a performance equivalent with copper antennas with one simple test,” Anasori says. So they looked further into it.

There are two methods to make a traditional antenna. One option is to create an incredibly thin sheet of metal and cut the antenna you need out of it. The other option is to construct it out of a paste of nanometals. The problem in both situations is the amount of processing it takes to produce thin sheets of metal or nanometal paste. And even then, the antennas are still bulky, relative to the small devices engineers want to put them in.

2d sprayable antennas solve those problems. Not only are they lighter, they don’t require an immense amount of processing to create.

“We can make ours in a few steps,” says Anasori. There’s no complicated manufacturing that goes into developing the MXenes – just add water and you’re ready to spray whatever antenna you need.

MXenes can also overcome a principle that limits how thin metal antennas can get, called the skin depth. In a nutshell, metal that is too thin cannot effectively pass electric current across its surface, which hampers its ability to function as an antenna. A 2D material like MXene doesn’t seem to share this restriction.

“The conventional formula for MXene skin depth is 100 microns,” says Sarycheva, or about six orders of magnitude thicker than the antennas the team constructed.

Yet their antennas still passed signals without trouble. That said, it’s not entirely clear why a principle like skin depth doesn’t apply to a material like MXene.

“We want to dig a little bit further into how the skin depth is working on a 2D nanoscale,” says Sarycheva.

Anasori says their antennas could easily be used in devices like smartphones, or other devices where the antenna is enclosed. Because their current solution is water-based, and MXenes are hydrophilic, the antennas will slough off whatever surface they’re printed on as soon as they get wet again.

That’s why the team is now exploring new composites to use as a solution, rather than water, which would open the door on sprayable antennas for applications in wet or humid environments. One option the team is looking at is suspending the MXene in simple polymers.

“There is a lot of work to be done on the fundamental side,” says Anasori, “and many other applications we want to explore.” Besides devices that would benefit from their transparent nature, like smart windows or solar panels, Sarycheva believes these antennas would be a natural fit for RFIDs on products in workerless stores. But their speculations don’t end there.

“With respect to transparent antennas,” says Anasori, “we believe there are applications we cannot imagine.”

WHY THIS MATTERS IN BRIEF The future of food doesn’t involve raising animals for slaughter or growing crops in fields … and it’s arriving.  … 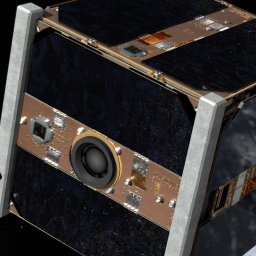 WHY THIS MATTERS IN BRIEF VR headsets are dorky and bulky, so Panasonic has cut away at them and re-imagined them.   Interested in the…