Defence forms a large part of every sovereign nations capability and identity, so it’s little surprise that it’s one of the world’s most innovative industries and one of the most prolific developers of new technology.

Firstly, I’d like to say a big thank you to the UK Ministry of Defence (MOD) team for inviting me to speak about the “Future of Defence” at RAF Lyneham near sunny Swindon, and I have to say, it’s not often that you share the stage with a 62 ton armoured vehicle and a military brass band – at least not in my experience anyway, but sadly there’s no video for this one because of restrictions on the site.

The day, as you’d expect from the Army, started early and it was run with military precision so it was no surprise that a group of us spared no time getting straight into the heart of things over bacon sandwiches and tea in the canteen, discussing everything from new military training techniques to next generation direct energy weapons systems.

Overall around 150 military personnel representing most areas of the MOD were in attendance, from Generals and Commanders to the Director of Training, the UK MOD’s CIO and many others, sitting in orderly groups between the heavily armoured tanks and helicopters at the REME Museum on the fringes of the base.

It has to be said that of all the sectors I’m involved with, over eighteen in all, from financial services and retail, to agriculture to high technology, the aerospace and defence industry is by far one of the most prolific adopters of emerging technology, and there seems no stopping them in their pursuit to be better, faster, stronger. Whether it’s 3D Bioprinting, Brain Machine Interfaces (BMI), Artificial Intelligence (AI), energy weapons, nanotechnology, optics, quantum  technology or stem cell technology, they’ve got their pulse on just about every technology out there, in fact they’re so prolific that overall, out of the 270 or so emerging technologies I monitor, 170 of which you can see on my 2017 Emerging Technology Starburst, they’re championing over 140. Compare this with the number of technologies that the financial services sector are busy investigating, namely AI, Blockchain and, to some degree, Quantum Computing and you can see how the other sectors pale by comparison.

I kicked off my keynote discussing some of the science fiction staples that we are either close to, or have already turned into science fact, technologies such as deflector shields, biological teleporters and tractor beams, and then as I strode my way through the presentation, discussing everything from disruption mechanics to the rise of creative and innovative AI’s, I eventually got on to what I’d consider to be one of my favourite parts of the show – shining a light on all of the crazy things that military complexes around the world are developing and deploying into theatre. Things such as the US DOD’s Avatar program, a program that uses MRI, ultrasound and X-Ray scans to create cell level digital versions of their new recruits that means that if they’re injured in battle the US Army can just 3D print out personalised, replacement body parts to treat them in situ.

We also discussed how clean meat technology could be used to replace ration packs at the front with fillet steak, and how today we are just at the beginning of being able to use 3D printers to print drugs and medicines in theatre, as well as grenade launchers and munitions. But that Pandora’s Box of tricks is by no means all. We discussed the deployment of new drone, laser and railgun defence systems, and autonomous destroyers, drones, hypersonic surveillance aircraft and mine sweepers, new persistent surveillance systems and Reapers that use neutrinos to detect explosives from miles away. Then I added in cameras that can see through walls and around corners, indestructible watermelons and self-healing electronics, Robo-hackers and hackproof code, quantum metrology, quantum communications networks and quantum radar, and so much more. And as for those new training methods I mentioned at the start? Well, who needs augmented reality and virtual reality simulators when you can just upload knowledge to soldier’s brains?

Scientists discovered a planet ravaged by storms of rubies and sapphires

WHY THIS MATTERS IN BRIEF This is the first time that we have observed weather on another planet, the fact…

WHY THIS MATTERS IN BRIEF Few realise just how fast we’re approaching the tipping point for autonomous warfare, but in… 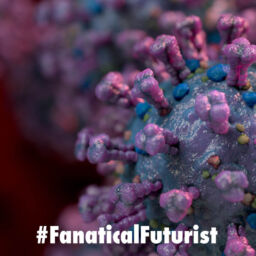